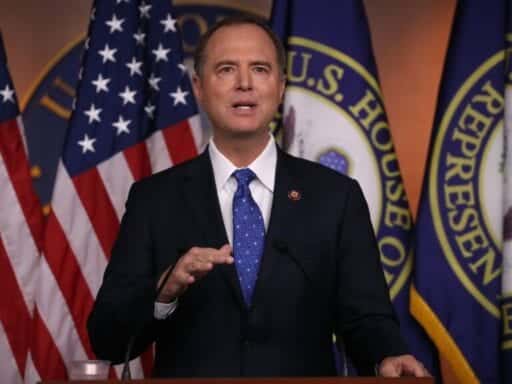 The White House has released a record of a phone call Trump held with Ukrainian President Volodymyr Zelensky to rebut a whistleblower’s allegations Trump asked a foreign leader to investigate a political opponent. The White House’s record of that call did contain Trump asking Zelensky to investigate former Vice President Joe Biden, and the whistleblower claims the administration placed its notes from the call in a system meant only for highly classified material in order to keep the request secret.

The whistleblower’s allegations ultimately led to calls for an impeachment inquiry, and Schiff is concerned Trump’s conversation with Zelensky may just be the tip of the iceberg.

On NBC’s Meet the Press Sunday, Schiff, who as chairman of the House Intelligence Committee is leading investigations into the Ukraine matter, said he wanted to better understand whether the White House was trying to hide any more calls with foreign leader — and if so, why.

“The paramount need here is to protect the national security of the United States and see whether, in the conversations with other world leaders and, in particular, with Putin, that the president was also undermining our security in a way that he thought would personally benefit his campaign,” Schiff said.

“If those conversations with Putin or with other world leaders are sequestered in that same electronic file that is meant for covert action, not meant for this, if there’s an effort to hide those and cover those up, yes, we’re determined to find out,” he added.

Over the past three years, Trump has had 11 phone calls with Putin, according to The New York Times. The content of those conversations has mostly been kept in secret — and the Kremlin wants to keep it that way.

Two days after the White House released its summary of Trump’s phone call with Zelensky, Kremlin spokesman Dmitri Peskov told reporters that he hoped conversations with Putin would remain private, according to the Times. Conversations between presidents are not usually shared with the public, and the release of the call with Zelensky is a “quite unusual” exception, Peskov added.

“We would like to hope that we would not see such situations in our bilateral relations, which already have plenty of quite serious problems,” he said.

Peskov did not give a definite answer on whether the Kremlin would agree to releasing a record of Putin and Trump’s calls. The disclosure of the contents would be handled case-by-case, although he hasn’t received any requests like that so far, Peskov said.

In general however, conversations between the president and world leaders are not usually shared with the public, in order to give both parties the freedom to speak candidly. The release of the call with Zelensky is a “quite unusual” exception, Peskov said.

There have always been calls for the White House to release conversations between Trump and Putin, although these demands have largely blown over in the past, in part because, as the Washington Post’s Greg Miller has reported, notes from some Trump-Putin conservations may not exist: “US officials said there is no detailed record, even in classified files, of Trump’s face-to-face interactions with the Russian leader at five locations over the past two years.”

The Ukraine, scandal, however, has renewed calls for the review of what notes may exist due to the whistleblower’s allegation the Trump administration has, on more than one occasion, placed records from phone calls with foreign leaders in a secure system reserved for top state secrets. This was done, the whistleblower says, to protect the president from the contents of those notes.

Trump’s call with Zelensky was reportedly placed in that system, and a recent report from CNN found that the White House similarly restricted access to records of Trump’s phone calls with Saudi Crown Prince Mohammed bin Salman and Putin. Officials found this unusual because the contents didn’t involve sensitive national security information.

It is unclear if the records of these conversations were stored in the classified system alongside the Ukraine phone call transcript, but as Vox’s Jen Kirby reports, there’s good reason to suspect so:

In a classified appendix that’s partially redacted, the whistleblower alleges that, according to White House officials he spoke with, “this was ‘not the first time’ under this Administration that a Presidential transcript was placed into this codeword-level system solely for the purpose of protecting politically sensitive — rather than national security sensitive — information.”

In other words, White House officials may have tried to cover up Trump’s conversations in other instances.

This has led some Democrats pursuing the impeachment inquiry, like Schiff, to question the content of the bin Salman and Putin calls. Russia’s requests the calls remain confidential will do little to quiet those who believe the records may include some wrongdoing.

Schiff and his committee may not be able to view the notes of those conservations themselves — particularly considering the Trump administration’s recent history of stonewalling investigations. But the whistleblower will testify before the House Intelligence Committee in the coming days. That testimony will provide an opportunity for its members to learn more about the redacted elements of the complaint, and to find out whether the the whistleblower has any further information about the president’s calls with Putin.