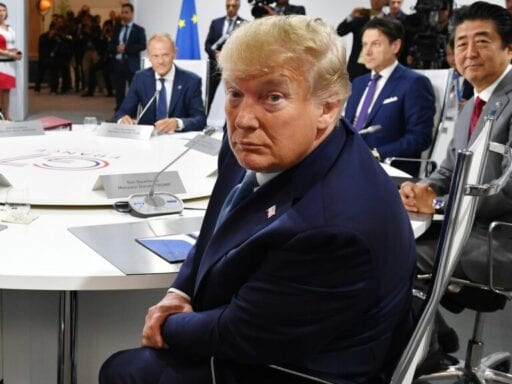 Share
Loading...
President Trump might wind up winning the war over his tax returns — or at least draw it out for a very long time. | Jeff J Mitchell-Pool/Getty Images

Democrats are battling for the president’s federal tax returns in court — and they haven’t even asked for the New York state ones.

As the 2020 election approaches, it appears likely that we won’t get to see President Donald Trump’s tax returns anytime soon.

House Democrats are becoming increasingly resigned to the idea that the battle over the president’s taxes will be a long slog, according to a report from Jeff Stein, Rachael Bade, and Jacqueline Alemany at the Washington Post. The White House has signaled it’s prepared to fight back at every turn. The court battle over Trump’s federal returns, even if Democrats do prevail, will probably drag on for months. And Democrats haven’t even asked for the president’s state tax returns from New York, which in July passed a law that would allow three congressional tax committees to request them.

How to go about getting Trump’s tax returns — and whether House Ways and Means Committee Chair Richard Neal (D-MA), who is leading such efforts, is doing enough — has been a matter of debate on the left for months. It is emblematic of a growing feeling among some progressives that Democrats have been too hesitant to take Trump to task since taking back the House in the 2018 midterm elections. The White House’s resistance efforts have worked better than expected, and the Democrats’ strategy has not.

Trump’s tax returns have been treated as a Holy Grail that would unlock the secrets of his wealth and, depending on where you fall on the political spectrum, potentially reveal him as a fraud or as having unsavory ties to foreign interests. If that were the case, it could be an important weapon again him in his reelection campaign — but it looks like Democrats aren’t going to have it.

The efforts to get Trump’s tax returns, briefly explained

On the federal level, Democrats have invoked Section 6103 of the Internal Revenue Code, a statute dating back to 1924, to try to get the president’s returns. It authorizes a handful of congressional committees, including Ways and Means, to get the tax return information of any taxpayer from the Treasury Department. That, conceivably, means the president’s as well. There’s debate about whether those returns could then be made public, but the committees, at least, are supposed to be allowed to request and access them. (I have a full explainer on the legal plan and how it’s supposed to work.)

Democrats asked the IRS for the president’s tax returns in April and in the months leading up to that spent time trying to build a case that leadership says they believe will have a better chance of standing up in court. They want to show that they are requesting the tax returns out of legitimate legislative and oversight duties, not as part of some partisan fishing expedition.

As expected, the Treasury Department has declined Democrats’ request, and in July, they sued to get them. As the Post notes, the judge currently assigned the case is a Trump appointee, which might not bode well for the Democrats’ case.

“The law doesn’t leave any wiggle room, so if the judge does his job, he can resolve the thing in a minute and give Congress the returns. If the judge is a shameless political hack, then it’s another story,” one Democratic aide told Vox.

Whatever decision comes down will likely be appealed, possibly up to the Supreme Court.

On the matter of the state tax returns, New York Gov. Andrew Cuomo signed a bill that would let Ways and Means and two other congressional tax committees request someone’s state tax returns from the New York State Commissioner of the Department of Taxation and Finance. Trump subsequently filed a lawsuit to block New York from releasing his tax returns. But here’s the thing: House Democrats never asked for them in the first place.

Neal has been criticized for moving slowly on trying to get Trump’s federal tax returns, and there’s been some head-scratching around his decision not to pursue the state ones at all. The Massachusetts Democrat told Bloomberg in June that his committee doesn’t “have jurisdiction over New York taxes.” He appears to be worried that going after the state taxes would make the federal request look too partisan and potentially weaken his case.

Some Democrats have backed his prudent approach. Others are encouraging him to move faster, including Rep. Bill Pascrell (D-NJ), an early proponent of going after Trump’s tax returns. “The American people deserve to know if their president is a crook,” he said in a statement after the New York law was passed in July.

Neal has also attracted a primary challenger for his 2020 reelection, 30-year-old Holyoke, Massachusetts, Mayor Alex Morse. “[Neal is] the one person that has the authority in Washington to get Trump’s state tax returns from New York, and he’s the one person standing in the way,” Morse recently told me.

Neal’s office did not return a request for comment in this story.

Beyond the ins and outs of the specific battle over the president’s tax returns, the broader question is that of expectation versus reality when it comes to what Democrats can and will accomplish in terms of investigations, subpoenas, and even impeachment now that they’re in control of the House. The White House has stonewalled many efforts to request documents and interviews, and Democrats have been slower than anticipated to launch probes in the first place.

Impeachment has become an especially contentious topic in the wake of the release of special counsel Robert Mueller’s report on the Russia investigation. More than half of House Democrats now support opening an impeachment inquiry into the president, but members of leadership, including House Speaker Nancy Pelosi, have been hesitant to move forward and warned that such a move could backfire.

Complicating matters more are comments from House Judiciary Committee Chair Jerry Nadler (D-NY) in early August that impeachment proceedings were already underway. “The fact is we are doing an investigation. We are investigating the facts. We’re investigating the evidence,” Nadler said in an interview on CNN. (As Vox’s Andrew Prokop explained, it’s not clear anything materially different is happening on impeachment than there was before.)

House Democrats are in a tough spot when it comes to holding Trump accountable. They were propelled back into power, in large part, on hopes that they would be able to take the president to task. Doing so has proven easier said than done for a number of reasons. Democrats waiting for a treasure trove of information they believe will be in the president’s tax returns might be waiting a long time, even forever.

The disturbing history of tear gas as the weapon of choice against protesters
Matt Bevin’s defeat in Kentucky wasn’t just about him
75 books from university presses that will help you understand the world
The Trump administration freeze on Obamacare’s risk adjustment payments, explained
A new social network makes an old bet: That we want to hear from rich people
Tech companies feel pressure to 'gobble up' more of our data for ads, app developer warns