Do plastic bag taxes or bans curb waste? 400 cities and states tried it out. 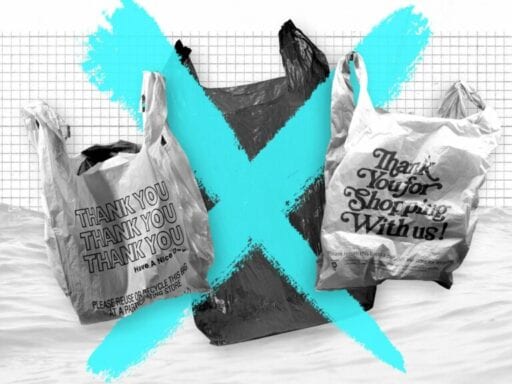 And will it work for plastic straws?

Where: In more than 400 states and cities in the US

Plastic bags are forever. The thin sacks that hold our groceries, toothpaste, and takeout meals have little hope of being recycled, and instead just might be reused as liners for our trash cans or containers for our dogs’ waste, after which they find themselves either blown into storm drains and rivers or hopelessly clogging landfills. According to one 2009 estimate, some 100 billion of these bags were used a year in the United States and somewhere between 500 million and 1.5 trillion worldwide.

More than 400 laws and ordinances across the country ban or tax plastic bags, according to Jennie Romer, an attorney at the Surfrider Foundation and a leading advocate and expert on plastic bag policies. The bans actually started outside the United States, with Bangladesh banning them countrywide in 2002 and Pakistan announcing recently that it, too, will ban single-use plastic bags. “Our slight change in habits will do miracles for future generations,” one politician wrote.

In the United States, bans were spurred by a wide range of environmental groups, especially those concerned with oceans and waterways like the Surfrider Foundation. Plastic bags and other plastic products can easily wind up in rivers, storm drains, and oceans, creating massive floating patches of garbage and threatening marine life. (Activists are already moving on from plastic bags to encouraging bans on plastic straws and foam food containers.) California passed the first statewide ban in 2014, after several local governments had already banned single-use plastic, including San Francisco, which did so in 2007.

While a straightforward ban may seem like the most effective way to stop people from using plastic, researchers and consultants suggest another strategy is working better: a tax on all non-reusable bags, which may or may not be combined with an outright ban on some plastic.

That’s because straightforward bans can lead to skyrocketing use of paper bags or thicker plastic that’s allowed because it’s considered reusable. While paper bags do not have the unique environmental downsides of single-use plastic (they can be recycled more easily and they don’t blow around as much), the processing of paper can be environmentally nasty. California’s ban, which also places a 10-cent tax on paper or reusable bags, is one of the most extensive in the nation, while all of Hawaii’s counties have passed laws that ban single-use bags, with some also tacking on a tax as high as 15 cents on other bags.

This has led to some backlash, including lawsuits from the plastics industries and efforts to roll back the laws. More than a dozen states, typically more conservative ones like Oklahoma or Mississippi, have passed laws that preempt local bag policies and put the question of taxes or bans solely in the hands of the state legislature.

Chicago banned thin plastic bags in 2015, but it allowed stores to use thicker plastic bags that could ostensibly be reused. “When that ban went into effect, the retailers’ response was that ‘Our customers want plastic, we can’t offer thin, let’s just start offering thick plastic bags,” said Tatiana Homonoff, an assistant professor of economics and public policy at New York University who has studied the plastic bag laws. The resilience of stores giving their customers some kind of plastic bag, she says, was “an unintended consequence of leaving close substitutes unregulated.” Chicago soon scrapped that policy and by February 2017 had implemented a new law: a 7-cent tax on all checkout bags.

“That’s where we see big changes in disposable bag use,” Homonoff said.

According to Homonoff’s research in both Chicago and Montgomery County, Maryland, “very small financial incentives can lead to big behavioral change,” she said. The fact that small fees, 5 or 7 cents, can lead to a big reduction in disposable bag use suggests that a sizable portion of the population is perfectly happy to use a reusable bag or not use a bag at all, and need just the smallest push to get there. Homonoff said that in her surveys, people would tell her, “I have a reusable bag in my car. Now I bring it into the store and actually use it.”

“As long as there is a fee component in place, that really drives people to not want to get that bag,” Romer said. “You see people walking out with something pressed under the arm.”

In Montgomery County, which implemented a 5-cent bag fee, the portion of customers observed by researchers at eight stores in the county who used disposable bags went from 82 percent to 40 percent, while the number of bags per trip also fell, according to Homonoff’s research. Beyond any environmental effects, these policies also seem to be changing the culture around single-use plastic, which many people know is environmentally damaging but still need a slight nudge to change their behavior. Alongside the bans, there’s been a surge of public awareness of the persistence of plastic waste and the folly of recycling it.

And these policies have real effects downstream — literally. San Jose, California, implemented its Bring Your Own Bag Ordinance in 2012, which included a ban on single-use plastic and a 10-cent fee for paper, and found dramatic decreases in “bag litter” in the city’s creeks and waterways. “The litter surveys demonstrated a reduction in bag litter of approximately 89 percent in the storm drain system,” a city environment and transportation committee report read, “60 percent in the creeks and rivers, and 59 percent in city streets and neighborhoods, when compared to data collected from 2010 and/or 2011 (pre-ordinance) to data from 2012 (post-ordinance).”

What drove the decrease in litter wasn’t just more people using more reusable bags — although that happened — but also a rise in using no bags. Reusable bag use jumped from about 4 percent of bags, the city said, to 62 percent, while the portion of people who used no bag doubled, and the average number of bags used per customer fell from three to fewer than one.

The Ferguson Foundation, a Washington, DC-area nonprofit group that organizes cleanup efforts in and around the Potomac River, found that after DC implemented a 5-cent fee in 2010 on single-use bags, the number of plastic bags removed by volunteers dropped by almost three-quarters.

But the preferred policy of the advocates and researchers isn’t being implemented everywhere. After the New York City Council approved a 5-cent fee for all takeout bags, the state legislature and Gov. Andrew Cuomo killed it before later passing a statewide law that banned plastic and allowed individual counties to impose a tax on paper.

“From what we’ve seen in other cities, it’s not going to be particularly effective,” Homonoff said of the New York law, as opposed to a tax on all takeaway bags. Romer, who worked on previous attempts to implement plastic laws in New York City, described the new law as “disappointing.” While New York City is following through by taxing paper, it is not required across the state, which means that outside the city, municipalities might allow for unlimited and untaxed paper bag usage, thus not encouraging overall bag usage to go down.

“We really want people to not get a bag at all if they’re getting an item or two, or bring their own bag,” Romer said. “I like visiting California to see that that works.”

Joe Biden explains why he flipped on the Hyde Amendment
Coronavirus’s threat to the global economy — and what to do about it
In defense of Twitter
Trump says he misspoke about Russia’s election meddling. Twitter isn’t buying it.
A volcano in the Philippines is spewing ash and threatening a bigger eruption
ISIS breakouts, US troop withdrawals, Assad advances: the weekend in Syria news