Dwayne “The Rock” Johnson is not running for president in 2020. Good. 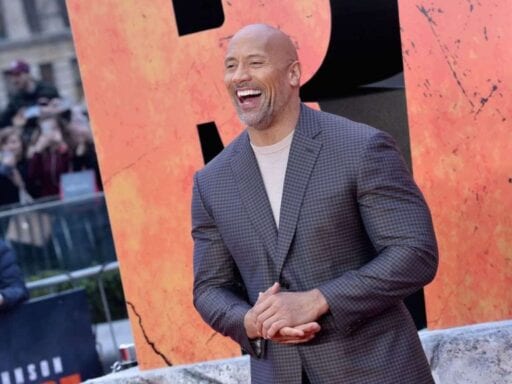 In a world where the Simpsons joke that Donald Trump would be our president has actually come true, it sort of makes sense that we’d consider our highest-grossing box-office hero for the job, too.

Dwayne “The Rock” Johnson’s return as the King of Summer officially begins Friday with the release of Skyscraper, which promises to be a true thrill ride filled with physics-defying stunts. In his return comes a revelation a year in the making: due to time constraints, Johnson will not run for president — at least not in 2020.

Talk of Johnson’s potential political cachet reached a fever pitch last year after an entertaining GQ cover story by Caity Weaver, in anticipation of Baywatch and the third season of his HBO series Ballers. With interest in Johnson seemingly higher than ever, and with politics influencing everything under the sun, the profile’s headline itself plainly proposed “Dwayne Johnson for President.”

The central question had become whether a beloved celebrity and nearly (nearly) infallible box-office draw could wind up in the White House. Even Johnson was in on the joke, as he and Tom Hanks buddied up during his Saturday Night Live monologue to announce they were running together for president.

Sure, at one point in time, this sounded like a ridiculous question: A hulked-out former pro-wrestler with whom America fell in love for his over-the-top action movies and laying the smackdown on his opponents in the ring, for political office? Give me a break.

The transition from celebrity to politico is not insurmountable — actress Cynthia Nixon is currently betting on that. And on the flip side of the political-popularity association, some politicians gain a certain level of celebrity that either catapults them into office, or keeps them there.

Does this mean that The Rock is perfect for public office? Maybe. But he’s also one of the few entities most Americans can actually agree about. That’s because Johnson has done a fine job of keeping his more controversial political beliefs to himself — there’s nothing for half of the country to disagree with him about.

So why would we want to waste him on politics?

For those of you who didn’t obsessively tune into WWE programming every night of the week in the 1990s, let me quickly catch you up. The Rock gained popularity in what’s known as the WWE’s “Attitude era,” which is where you get your Stone Colds and your Chynas. This was a time of huge personalities for pro-wrestling.

After his less-than-stellar introduction as a third-generation wrestler, then his turn as a heel — that’s a bad guy — The Rock emerged as a wise-cracking, endlessly entertaining, astoundingly athletic star of a golden era of pro wrestling.

From 1999 to 2002, the arena would erupt every time he was called to the ring. His face practically popped off every Megatron from Wooster, Massachusetts, to San Diego, as he spouted the best smack talk in the business.

With the crack of “Can you smellllll what The Rock is cookin’!?” blaring over the loudspeaker at the beginning of his entrance music, every fan rose to their feet as though the president was entering Congress to deliver the State of the Union. In the background of every Rock match, cameras flashed from the cheap seats to ringside, hoping to catch the moment that the People’s Elbow came flying down on an opponent.

As he truly lived up to his label as “The Most Electrifying Man in Sports Entertainment,” Hollywood came calling. The Rock stole the show as Scorpion King in an otherwise forgettable Mummy movie, to the point where he got his own spinoff. Then came Saturday Night Live, on which he made his fifth appearance as host in 2017. Then came more TV. More movies. Starring roles. Sequels. Franchises.

Eventually, people who wouldn’t be able to name a Pay-Per-View match beyond Wrestlemania knew Johnson as an action hero who used to be a wrestler. His electric personality fit in perfectly with his film characters, and once he was able to dial back the over-the-top wrestler persona, you get what we know today: a funny, humble guy who eats like a beast and works out like, well, two beasts.

As Weaver notes in her profile, Johnson’s outspoken in his respect for military service members and veterans. He loves his family. He talks openly about how hard he works, whether it’s in the gym, or on a movie set, or for charity. Plus there’s no ignoring that the star sounds like a leader with a campaign slogan: “More poise, less noise,” as he said on the Tonight Show.

Minus some policy talk, you might say he’s been cultivating a version of himself that’s similar to that of an emerging politician, tweeting and Instagramming glimpses into his life that make him seem accessible — like someone you’d want to have a beer with. Aside from hammering opponents on health care, for example, isn’t that how politicians (or anyone, really) make a name for themselves now, anyway?

Over the years, Johnson’s earned a built-in base of millions of unwavering fans. Yet despite his life being an open book, there’s also very little we really, truly know about how he thinks.

Wait, what, exactly are The Rock’s politics?

By now we know Johnson’s political stances are quite mysterious, and he admits in Weaver’s profile that he’s kept it that way for a reason. Especially with a nation so politically fractured, opening up on potentially unpopular opinions could lose him fans and potentially harm his career. And even relying on flat stereotypes to guess where he comes down politically isn’t that easy.

Think about it, what do you really know about The Rock’s politics? He’s getting acquainted with feminism, has clearly stated he dislikes the Muslim travel ban, and played gay in a movie before it was cool, so he must be somewhere on the left, right?

But he spoke at the 2000 Republican National Convention, he loves, loves, loves the troops, and seems, in his movies at least, comfortable with guns, so maybe he’s on the right? He opted not to endorse either presidential candidate back in 2016, and hasn’t publicly said how he voted. He is exceedingly cautious in how he criticizes Trump, which could be either because he doesn’t want to alienate Republicans, or to prevent Democrats from appropriating his statements as a rejection of the president.

There’s also the matter of his race — let’s face it, especially after a black man was elected president and the tumult of the 2016 election, race plays a factor in politics. Johnson is black and Samoan, and comes off as ethnically ambiguous, a blank slate upon which anyone can project whatever they see — or whatever they want to see. In the GQ profile, Johnson jokes that “white people often guess he is ‘… Greek?’” with Weaver going on to note, “In other words, pretty much anyone can find themselves, or a slightly tanner or paler version of themselves, in Dwayne Johnson if they look hard enough; appearance-wise, he has a hometown advantage everywhere on earth.”

All of this is makes up Johnson’s appeal. He’s both superhuman and down to earth. He works incredibly hard and is rewarded handsomely for it. He’s sought out for political endorsements and starring roles in movies. He’s the living, breathing American dream: rich, influential, and beloved by all four quadrants of movie-goers.

As David French of the National Review asserted in his cover story about the star last year, Johnson is the celebrity Americans need. At a time of deep political polarization, where Facebook has become a minefield for anger, only one man can drive an upside-down, tricked-out American muscle car into the hearts of America and make us whole again.

Perhaps that’s why we shouldn’t waste Johnson on politics. Yes, it all sounds fun now to have a president who was once half of the most delightfully mismatched tag-team champion duo, The Rock ’n’ Sock Connection. Sure, Ronald Reagan and Jesse Ventura provided blueprints for how entertainers can have second lives as politicians, while Barack Obama and Bill Clinton have used the power of celebrity to harness political influence.

However, there’s no avoiding the two things that would inevitably undermine a Dwayne Johnson presidency: politics and policy. We’d have to know what he really thinks, and we’d have to experience how he’d make his policies happen. Are we really ready for that? His lack of hard political experience doesn’t necessarily mean he would be bad in office. But do we really want to risk losing America’s most beloved action star — one of the few ideals most people can agree on, in such a polarized era no less — to see how he’d govern?

This isn’t to say he should never run for political office. As Johnson said, and as his longtime friend Hiram Garcia has reiterated to Vanity Fair, the star takes this prospect very seriously. “I have so much respect for the position,” Johnson told reporters at the premiere of his film on Tuesday. “It’s something that I seriously considered. What I need is time to go out and learn.” Besides, being a good public servant doesn’t require one to enter politics. As Johnson already knows through philanthropic efforts, being a good citizen isn’t only about running for office.

Still, he’s positioned himself as the upstanding, hardworking everyman with values instead of political stances. What happens when Johnson’s luster wears away thanks to the partisan bickering inherent in a political career? All we’d be left with is another guy in a suit (perhaps with the sleeves torn off?) with likely measured political ideas.

So will we see Johnson-Hanks at the 2020 Whatever National Convention? Nope. But it would be a hell of a lot more entertaining to watch it play out on a movie screen than in real life.

Bernie Sanders got more young voters in New Hampshire than everyone else combined
Netflix’s Atlantics is a gorgeous, angry romance set in Senegal
Trump’s catastrophic foreign policy weekend, explained
Twitter, Microsoft, LinkedIn, and other companies are calling for an end to Trump’s rule to keep out...
How thrifting became problematic
3 winners and 2 losers from the August 7 primary and special elections