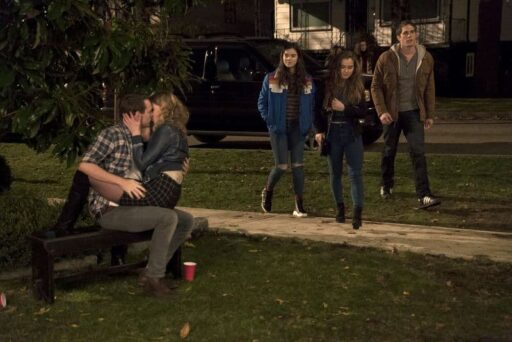 You’ve got to be in at least 11th grade if you want to buy a ticket to Eighth Grade.

Bo Burnham’s new coming-of-age comedy began its theatrical run this past weekend, but prospective moviegoers in the same age bracket as lovably awkward protagonist Kayla (Elsie Fisher) were plum out of luck: In their infinite and highly arbitrary wisdom, the Motion Picture Association of America saw fit to brand the film with an R rating, barring all viewers under 17 years old unaccompanied their parent or an adult guardian.

Their rationale: a bit of salty language involving four-letter words and coarse slang terms, a situation more accurately described as sexually charged than sexual, and one painful, hilarious scene in which our hero does some intrepid YouTube searching on blow job technique. Even Common Sense Media, the organization whose entire mission is sniffing out objectionable content in family-geared entertainment, called the film “a good (if slightly cringeworthy) movie to watch with your teen.” Regardless, for this, the scarlet R.

The frustrating, paradoxical notion that the average teen cannot handle a frank account of being 13 years old until four years after the fact is nothing new, however. It’s just the latest reminder of how the MPAA’s highly specific hangups can restrict some spheres of film while taking a laissez-faire attitude to others. And it’s the youngest class of ticket-buyers who are paying for it — or, rather, being forbidden from paying for it.

Eighth Grade is far from the first high-school-set film slapped with a prohibitive rating on questionable grounds, despite being leagues removed from the full-bore raunch of a Superbad or a Blockers. There was nary a boob to be seen in 2016’s Hailee Steinfeld vehicle The Edge of Seventeen, but a handful of F-bombs, some scenes of underage drinking, and a recitation of one particularly frank sext were enough to earn the dreaded R rating. The same fate awaited 2014’s Boyhood, an even tamer film dinged for a bit of sailor talk, some mild birds-and-bees conversations, and scattered underage drinking and cannabis-smoking.

Then there’s the curious case of the 2012 screen adaptation of Stephen Chbosky’s bildungsroman novel The Perks of Being a Wallflower: The MPAA initially went for the R, for language as well as a nonjudgemental depiction of acid use and the scandalizing sight of Emma Watson clad in a white bra for a screening of The Rocky Horror Picture Show. The producers appealed the rating, and ultimately got it bumped down to a PG-13 for “mature thematic material, drug and alcohol use, sexual content including references, and a fight—all involving teens.”

In all these instances, the material in question is handled with sensitivity and delicacy befitting films unabashed about their intent to speak directly to youth audiences. Aside from a bit of uncomfortable shifting in their seat, any high school sophomore could safely watch them alongside Mom and Dad.

This raises the question of following the law’s letter versus its spirit, whether the undefinable quality of a film supersedes the superficial criteria placed on it. Pursuing that line of inquiry leads to some sticky deliberations in the Escher-style labyrinth that is the MPAA’s standard operating practice.

The MPAA adheres to an arcane, not-fully-known set of rules occasionally verging on the ridiculous. The classic example: One utterance of “fuck’ will slide in a PG-13 release, but a second places it firmly in R territory. (Though the MPAA’s official Classification and Rating Rules allow for extenuating circumstances based on the context of the dialogue, pending a two-thirds majority vote. One such beneficiary of this policy: Adventures in Babysitting.)

In a recent interview with Julie Taymor and Evan Rachel Wood about their time working on 2007’s Across the Universe, they mentioned that they could get away with one exposed breast and manage a PG-13, but revealing a complete pair is apparently grown-up business, and accordingly would’ve gotten them an R. Because the MPAA is not required to specify for the public precisely how they arrive at their conclusions, viewers are often left wondering how Boyhood ends up with the same classification as Natural Born Killers.

That Oliver Stone’s hallucinogenic bloodbath got downgraded from an initial rating of NC-17 with the excising of four minutes of footage is a testament to the MPAA’s amenability where violence is concerned. The American fetish for barbarism has seeped into the national film culture with a quiet insidiousness, creating a governing body that writes off mass destruction as no biggie while going for the fainting couch at the sight of a second nipple.

A recent review of the PG-13 blockbuster Skyscraper pointed out that it contains exponentially more death and destruction than its clear antecedent Die Hard, but the Christmastime classic landed an R rating due to its bloodshed. The new Dwayne “The Rock” Johnson tentpole includes suicide bombings, civilians mowed down by gunfire, and weeping children facing down the business end of a firearm — but hide the hemoglobin, keep the tone light, and you’re a PG-13 film in good standing.

Contrast that with the MPAA’s positively puritanical attitudes toward sexuality at the movies, a subject thoroughly explored in the 2006 investigative documentary This Film Is Not Yet Rated. Sex scenes are picked through with a fine-toothed comb, any detail — a wiping of the chin, a moan too emphatically acted, any maneuver beyond the most vanilla standards — sufficient to bump a film up to the R zone and limit its reach.

All the same, it was a small win, and the underlying issue persists today. A little sexual curiosity and experimentation is a perfectly normal part of the adolescent experience. Grievous bodily harm, one hopes, is not.

All things said, we’ve come pretty far. Our current ratings system is a vast improvement over the blanket censorship of the Hays Code that the MPAA’s ratings were created to replace. Long gone are the days when married couples were mandated to sleep in separate beds, left in the past along with the pre-PG-13 era in which the glue-huffing, dummy-blowing Airplane! squeaked through with a PG.

But the MPAA is still a highly imperfect organization, and because it’s not a governmental agency, it’s difficult for regular folks to lobby for improvements. (Though that much is probably for the best; a state-operated body of cultural censorship, under this or any administration, would be a step or five backward.)

So let this be a call for common-sense policy on the hot-button issue of what sophomores are permitted to watch after school. In 1964, Justice Potter Stewart famously said of hardcore pornography, “I know it when I see it.” The instantly immortal quote was his shorthand argument that though he may not be able to explain why, it’s clear to anyone who watches Louis Malle’s The Lovers that it’s more than common smut.

Likewise, though films like Eighth Grade may contain mature elements, their execution renders them more palatable for a younger class of viewers than an R rating would suggest. Intangible qualities like a sense of gentle empathy, candid humor, and tasteful camerawork mark the invisible line between trauma fuel and a safe vicarious taste of early adulthood. The elastic clause that safely cleared a way to theaters for Adventures in Babysitting needs a workout.

A bit of cussing and sex chatter is a standard, arguably even essential component of most people’s teenage years, and many kids first start to wrap their heads around the concept via the remove of movies and TV. In no small way, that’s the moral of such stories erring on the side of the developmentally instructive: It’s cool that you can’t stop thinking about sex, don’t worry that you’re so awkward and sweaty, the instinct to test your limits is healthy.

It doesn’t take a lot of emotional intelligence to see that this would be a positive example for anyone at the same juncture in life. Those hindered from joining Kayla on her stumbling journey through puberty are precisely the viewers who would benefit the most. In other words, won’t somebody please think of the children?

Olivia Nuzzi and Sam Sanders talk about the final days of the Trump White House
Why Mitch McConnell relented on his demands about preserving the filibuster
Covid-19 “long-haulers” find a community online
Kansas primary recount rules, explained
The sorrows of Ben Affleck
Why the game of Life used to have poverty, suicide, and ruin