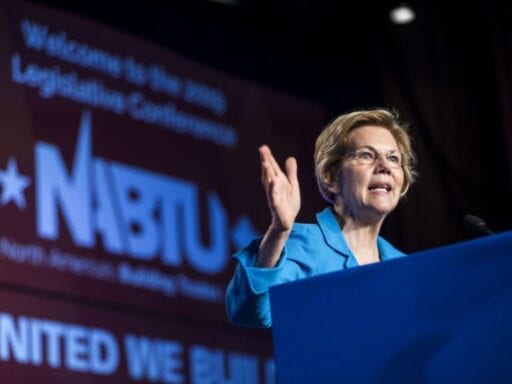 She and Julian Castro are the first 2020 contenders to do so.

Sen. Elizabeth Warren (D-MA) has called for President Donald Trump’s impeachment after the release of the Mueller report.

The senator and 2020 hopeful reacted to special counsel Robert Mueller’s 448-page report, which was released on Thursday and detailed the findings of a nearly two-year investigation, in a series of tweets on Friday.

Warren wrote that the report shows that a “hostile foreign government,” as in, Russia, “hacked our 2016 election to help Donald Trump and Donald Trump welcomed that help.” And once elected, Trump “obstructed the investigation into that attack.”

Warren noted that Mueller wrote in the report that Congress “has the authority to prohibit a President’s corrupt use of his authority in order to protect the integrity of the administration of justice.”

Ultimately, she called for Trump’s impeachment: “The severity of this misconduct demands that elected officials in both parties set aside political considerations and do their constitutional duty,” Warren wrote. “That means the House should initiate impeachment proceedings against the President of the United States.”

Mueller put the next step in the hands of Congress: “Congress has authority to prohibit a President’s corrupt use of his authority in order to protect the integrity of the administration of justice.” The correct process for exercising that authority is impeachment.

The severity of this misconduct demands that elected officials in both parties set aside political considerations and do their constitutional duty. That means the House should initiate impeachment proceedings against the President of the United States.

The Mueller report outlined 10 potential instances of obstruction of justice by Trump, including his decision to fire FBI Director James Comey and his attempts to oust the special counsel. But Mueller declined to come down on whether the president committed criminal obstruction of justice and instead left the decision in Congress’s hands.

Some Democrats have called for Trump’s impeachment in the wake of the report. Rep. Alexandria Ocasio-Cortez (D-NY) on Thursday tweeted that she would sign on to a resolution put forth by Rep. Rashida Tlaib (D-MI) in March calling on the House Judiciary Committee to investigate whether Trump committed impeachable offenses. Reps. Ilhan Omar (D-MN) and Ayanna Pressley (D-MA) have also called for Trump’s impeachment.

Former Housing and Urban Development Secretary Julian Castro in an appearance on CNN earlier in the day on Friday told journalist Anderson Cooper it would be “perfectly reasonable” for Congress to open impeachment proceedings. “It’s clear that Bob Mueller and his report left that in the hands of Congress,” Castro, a Democrat running for president, said.

Other Democrats, however, have been more hesitant about impeachment.

House Majority Leader Steny Hoyer said in an interview with CNN’s Dana Bash on Thursday that impeachment is “not worthwhile” at this time: “Very frankly, there is an election in 18 months, and the American people will make a judgment.”

House Speaker Nancy Pelosi in March essentially ruled out impeaching Trump. “I don’t think we should go down that path, because it divides the country,” she said in an interview with the Washington Post magazine’s Joe Heim. “And he’s not just worth it.”

Pelosi sent a letter to House Democrats to set up a meeting a Monday to discuss the “grave matter” of the Mueller report. “Congress will not be silent,” she wrote.

House Judiciary Committee Chair Jerry Nadler (D-NY) issued a subpoena on Friday demanding an unredacted version of the Mueller report and the underlying materials by May 1. Nadler said on Thursday that it was too early to talk impeachment, but he didn’t rule it out, either. “That’s one possibility; there are others,” he said. “It’s too early to reach those conclusions; it’s one reason we wanted the Mueller report … and we’ll want other evidence too.”

Most other 2020 Democrats have been more hesitant on impeachment

While Democratic presidential candidates have called on Congress to continue investigating Trump and held up the Mueller report as evidence that the president should be defeated, most have steered clear of explicit impeachment talk.

Vox’s Li Zhou on Friday did a rundown of 2020 reactions: Sen. Bernie Sanders (I-VT) called on Congress to “continue its investigation into Trump’s conduct and any foreign attempts to influence our election.” Former Housing and Urban Development Secretary Julian Castro said the report “exposes disgraceful behavior.” Sens. Amy Klobuchar (D-MN), Cory Booker (D-NJ), and Kamala Harris (D-CA) have all urged Mueller to appear before Congress. Former Rep. Beto O’Rourke (D-TX) during his 2018 Senate campaign in Texas said he would vote for impeachment proceedings if elected, but he has softened his rhetoric somewhat on the issue during his presidential bid.

As Zhou points out, many in the group have avoided the topic:

Klobuchar and Harris are among the Democrats skirting the question of impeachment, for now. “Our job is to be jury, so I’ve been really careful talking about if an impeachment is brought before us,” Klobuchar told MSNBC’s Chris Hayes.

“Well, I think that there’s definitely a conversation to be had on that subject, but first I want to hear from Bob Mueller and really understand what exactly is the evidence that supports the summary that we have been given today,” Harris noted.

With her call for impeachment on Friday in the wake of Castro’s comments, Warren is upping the ante for the rest.

5 ways to prevent another 100,000 coronavirus deaths in the US (and beyond)
Online romance scammers stole more hearts (and money) in 2020 than 2019
Experts worry Trump revealed US secrets when he tweeted a photo of an Iranian launch site
Dark matter, humility, and coming to grips with the unknown
We’re underestimating the mind-warping potential of fake video
Lobbyists tried to ban labeling veggie burgers “veggie burgers.” The EU said no.