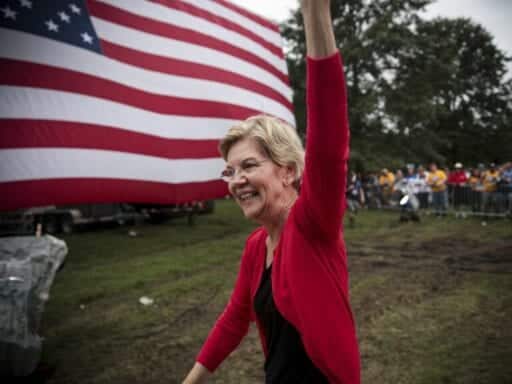 The 2020 presidential candidate is adding to her cadre of proposals aimed at addressing corruption in Washington, DC, which she sees as the root cause of dysfunction and policy stalemate. The latest is to increase pay for congressional staffers — from chiefs of staff to legislative aides to policy directors.

The reasoning is twofold: Warren argues paying congressional staff more would maybe keep them from leaving Congress and becoming wealthy lobbyists, and it could also help lawmakers attract more talent to their teams, instead of having to rely on outside sources, like lobbyists, for policy information.

Currently, each House and Senate office gets to act like a business: They are given a budget and are allowed to set salaries, with some limits, for staffers as they see fit. But that budget has shrunk over time. And between 2001 to 2018, a Congressional Research Service report tracking 15 congressional staff positions, found that the median pay for 10 of them actually decreased by at least 5 percent. A lot of lawmakers have proposed simply increasing that budget.

But Warren wants to do something different. She wants to make congressional staffers’ pay follow the same structure government agencies use to pay federal workers — through different grades and levels that are adjusted annually. It’s called the General Schedule (GS). General Schedule employees in Washington, DC saw an average 8.19 percent increase between 2001 and 2018. Their “base pay schedule is usually adjusted annually each January with an across-the-board pay increase based on nationwide changes in the cost of wages and salaries of private industry workers,” according to the U.S. Office of Personnel Management.

To do this, Warren’s campaign said they would advocate for a change to a part of the U.S. code that manages federal employee pay to include any “agency, office, or other entity for which the pay of the employees of the agency, office, or other entity is disbursed by the Secretary of the Senate or the Chief Administrative Officer of the House of Representatives.” This change would exempt lawmakers.

Warren is touching on some clear trends. Congressional pay for many top level staff has actually decreased over time, and is subject to the whims of congressional leaders, who often like to limit budgets for Congressional offices out of a political show of fiscal restraint.

As Vox’s Matt Yglesias explained, not only is pay going down for these congressional staffers, but the pay gap between private sector — particularly lobbying:

A big part of the wage stagnation story, meanwhile, is that inequality of labor income has risen drastically in an era of rising CEO pay and windfalls for “superstars” in law, finance, and entertainment. So not only has congressional pay fallen in real terms, it’s fallen faster compared to the average worker and even faster compared to other elite occupations.

In other words, lobbying pays a whole lot better, and Warren, who is arguing for more independence between Congress and the lobbying world, sees that as a problem that can be addressed. After all a lot of congressional staffers go on to becoming lobbyists, including one of Warren’s own senior Senate health policy advisers.

“Nobody should be surprised, then, that the average tenure of House staffers is less than four years for all positions, compared to 13.5 years for the average federal employee — and that congressional staffers often leave to take lobbyist jobs working on behalf of giant corporations,” Warren’s proposal reads.

Warren isn’t the only one to raise this issue. When Rep. Alexandria Ocasio-Cortez (D-NY) first made it to Washington D.C. after being elected to the House, she shared a story about going to a dive bar where she met congressional staffers working second jobs as bartenders, managers and servers.

This week I went to dive spot in DC for some late night food. I chatted up the staff.

This is a disgrace. Congress of ALL places should raise MRAs so we can pay staff an actual DC living wage.

Ocasio-Cortez called for giving congressional offices bigger budgets. Warren just wants staffers to be treated like all other federal employees.

Bernie Sanders’s evolution on immigration, explained
Vox Sentences: Picket lines round the US
These memes want Democrats and Republicans to be friends. Good luck!
Why Ta-Nehisi Coates is hopeful
Tony Blinken, one of Biden’s most trusted aides, will be his secretary of state
With E3 and SXSW canceled, the direct losses from major tech events soars beyond $1 billion