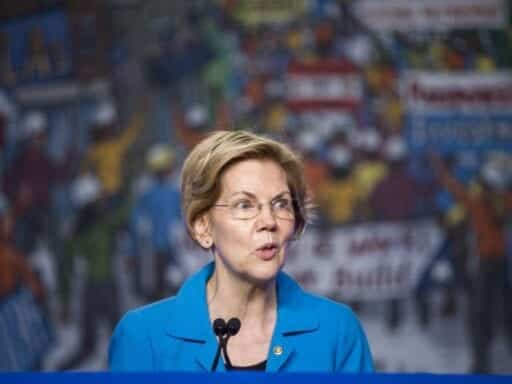 This riff from Elizabeth Warren is Amazon’s worst nightmare.

When it comes to big tech, Sen. Elizabeth Warren (D-MA) has been the most aggressive candidate in the Democratic primary. She’s detailed policies for breaking up behemoths like Amazon, Google, Facebook that would, among other things, force Amazon to give up control over Whole Foods, and Facebook to spin off WhatsApp and Facebook.

A lot of us — including Elizabeth Warren! — are customers of one or more of these companies, benefitting from their simple, integrated services. At Warren’s CNN town hall on Monday night, an audience member asked her why an Amazon user should still support her policy.

Her answer was at once simple and compelling: Big tech is crushing competition.

The problem, Warren argued, was in the dual nature of modern tech companies. They are at once a platform, which Warren defines as “the place where people come to buy and sell goods,” and an information aggregator, collecting vast amounts of data on what people who use their platforms want. All that information allows them to put their own products on the platform, micro-targeted to appeal to the most consumers, and crowd out any competitors.

This may sound a bit abstract, but Warren explained it clearly by using a hypothetical brand called “Pet Pillows” selling their doggie goods on Amazon:

Every time you go to buy something, they get your information and they aggregate it with the other information they had about you. Every time you come to sell something, they get information. And then they see that, whoa, over there it looks like Pet Pillows is starting to make a big profit. Huh, says Amazon. I know what we’ll do. Let’s jump in front of Pet Pillows and do “Amazon pet pillows” and move Pet Pillows from the front page back to page 16. And the consequence is that Amazon, because of its superior information, can come in and knock out all of the [competition] …

So the core vision in her “break up big tech” reform, she explains, is to prevent Amazon (and Google and Facebook) from this kind of anti-competitive behavior. This time, she used baseball rather than Pet Pillows as the analogy:

If we break off the platform from the parts that are competing, what you’ll see in America is a platform that works really well. It’s a very profitable business. But you’ll see a lot more competition where little businesses have a chance to get going where when you’ve got a good idea you can build that good idea into something, where there’s really a chance for everybody to get in and compete. So that’s the reason I want to see the two of them broken apart.

This answer, at least to my mind, is part of what sets Warren apart among the Democratic candidates — and one reason she’s faring relatively well in the polling so far.

There are certainly questions about Warren’s candidacy; she faced two electability questions on Monday night and didn’t have a great answer to at least one of them. But Warren is taking on a huge 21st-century question — the power of big tech — at a level of policy detail other Democrats aren’t really matching. And when challenged on this policy, she gave an answer responsive to the audience member’s concern — one that was crystal clear on a topic that often feels abstract and reasonably compelling to boot.

How South America became a coronavirus epicenter
Inconceivable! The Vox Book Club is reading The Princess Bride in June.
The House just passed a $1.4 trillion spending deal — taking a major step to avoid a government shut...
When a sex offender calls, she’s there to listen
Coachella 2020: The good, the bad, and the “OK, sure” of this year’s lineup
The fall equinox is Saturday: 8 things to know about the first day of autumn