Emirates flight from Dubai to JFK: how many are actually sick? 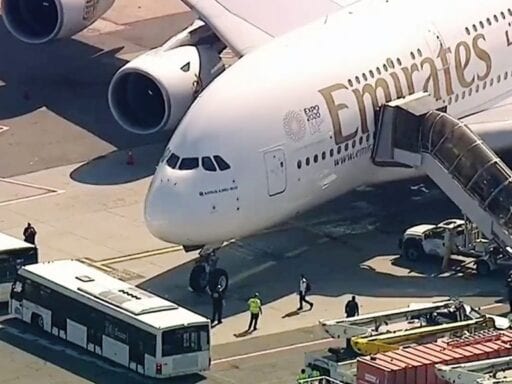 At least 10 people who were on the plane have been hospitalized. The rapper Vanilla Ice was also on board.

It’s a nightmare scenario for the global age: You’re on a plane and passengers around you come down with coughing and fever. This is apparently what happened on an Emirates airline flight from Dubai to New York’s JFK Airport, which had to be quarantined upon arrival for part of Wednesday morning.

But exactly how many are sick? There were conflicting estimates flying around: Emirates said “about 10,” while the US Centers for Disease Control and Prevention Wednesday morning put the number closer to 100.

While the details are still fuzzy, here’s what we know so far:

BREAKING: An Emirates A380 in quarantine at JFK Airport right now awaiting CDC officials after about 100 passengers became ill with fevers over 100 degrees and coughing. Flight 203 had just arrived from Dubai. pic.twitter.com/lyUgNbMaEW

Deplaning and having temperature taken pic.twitter.com/MVxWqJPLTe

Correction: An earlier version of this article stated Vanilla Ice was an 1980s pop star. While he was active in the 1980s, he rose to fame in the 1990s.