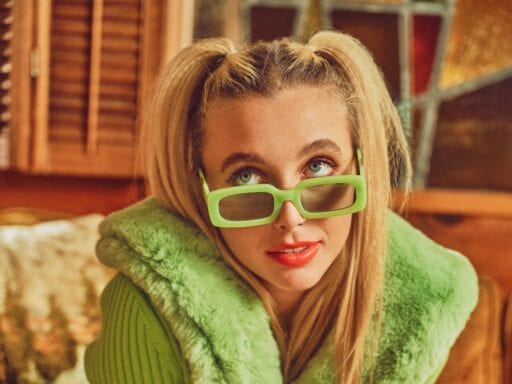 Plus, why “boring” jobs are going viral.

A video of a day in the life of Emma Chamberlain, a 19-year-old in Los Angeles, has more than six million views on Youtube. It is not a particularly eventful day; Emma makes iced coffee and eggs. She drives to Trader Joe’s, then goes on a run. At minute 13, she announces, “I’m probably gonna go lay in bed for the next three hours until I’m hungry again.” It could have been a day in my life, or anyone else’s.

Yet the fact that Emma Chamberlain’s life could be yours is precisely why people have clicked on her videos a grand total of 1.2 billion times, and why she’s the reigning queen of the segment of Youtube that thrives on young women doing relatable activities. Through clever, fast-paced editing and goofy witticisms, Emma, often makeup-free and wearing a hoodie, has made herself endlessly watchable to a generation of kids who identify more with what vlogger they grew up with than their favorite TV show.

Emma is not just the most popular girl on “Relatable YouTube,” she is its inventor. Since a video of herself picking through a dollar store haul went viral in 2017, she has set the tone for “the way people talk on YouTube now, particularly the way they communicate authenticity,” as a New York Times profile described it. She treats the camera, and thereby the viewer, as if it is her best friend, a permanent fourth wall off which to bounce asides and throwaway jokes. Viewers feel as if they know her; if you were to conduct a study on 21st century parasocial relationships, Emma Chamberlain would be its cleanest example.

The irony is that being professionally relatable has made Emma Chamberlain extremely famous and rich, which for most viewers makes her the very opposite of relatable. Her revenue from YouTube videos alone could net up to $1.7 million per year, in addition to sponsored content deals like her ambassadorship with Louis Vuitton. Earlier this year, she purchased a $4 million home in West Hollywood.

It is obvious why so many brands want to work with her — she’s funny, she’s pretty, she lends a company an ironic-but-still-friendly face to use as its mascot. Emma herself is a saleswoman too; like all successful YouTubers she has her own line of merch, as well as a collab with a sunglasses brand, and most recently, a line of fair-trade coffee.

Chamberlain Coffee is ostensibly the reason why I was able to interview her last week, in what publicists pitched as a “Zoom coffee date” with Emma. I thought about how someone so good at being relatable would also, of course, make an amazing businessperson, and I thought about how Emma is widely known as one of the most hardworking vloggers working today. She has a professional editor now, but before that she’d spend 20 to 30 hours working on a single video. It’s clear she takes her work very seriously, despite the lo-fi goofiness that ends up on her channel.

I also thought about how much our interview reminded me of so many conversations I’ve had with other “relatable” or “alt” TikTok stars. These kids, who seem so bizarrely weird online, whom viewers might think are just turning on the camera and doing their thing, are acutely aware of their personal brands, their engagement metrics, their career growth. This is not to suggest that it is all an act, or that Emma or anyone else is a phony. It’s to say that coming across as relatable online takes far more work and self-awareness than perfecting a TikTok dance or filming high-budget YouTube pranks. It is, I would argue, almost a form of art, one that the term “influencer” can’t really convey.

Emma is smart, and she has a lot of thoughts about all this, too. So here’s what we chatted about during our Zoom coffee date, which ultimately ended up being a phone coffee date, because Emma’s wifi went out. Relatable!

I’m sitting here having some of your coffee. It’s great! Was this something you always wanted to do?

Ever since I was a kid, coffee was a staple in my life. Lowkey, when I was super young my dad and I would go to Starbucks every morning. God, I shouldn’t say that.

When I got a little bit older, we started going to San Francisco and exploring some of the really cool, artsy coffee shops and we’d just talk for hours in there and have fun playing cards. When I started my YouTube channel, it became such a big part of my brand without me realizing it or meaning to do that.

So when my team was like, “Do you want to do something with this?” I was like, “Yes, that’s my dream. That’s all I’ve ever wanted.”

You moved to LA from the Bay Area not too long ago and have spoken a little bit about why it can be hard sometimes. What’s it been like?

I’m not the biggest fan of Los Angeles, if I’m being completely honest with you. It’s tough to live here and it’s a tough place to be, but at the same time, it’s so perfect for what I do and I’ve met such amazing people. It’s definitely helped with my career 1,000 percent.

[But] everyone who does the same thing as you is here, which can make it feel very high school-esque, because there’s no escape from the internet. You log off, go outside, and you just see more people that you were seeing on your phone. That’s really tough for me, because I need that escape.

It’s like there’s nothing for yourself here. In your hometown, you have that one coffee shop where you can be there for hours and you won’t see anyone you know, there’s no paparazzi. It’s harder to find that here.

When did you start noticing people like the Hollywood Fix, which has become almost like a TMZ for Gen Z, following you around?

I had a few experiences about a year ago and that was very jarring to me, but then it kind of stopped for a whole year. Then recently, I think the whole culture of TikTok has made that stuff 10 times crazier. It’s just weird, because when I was younger, who got paparazzi? Models, musicians, movie stars, that’s it. It’s crazy to see that it’s happening to digital influencers as well.

How does it make you feel when you hear girls say they want to be you?

I mean, of course it’s such a compliment. I have an amazing life and have amazing people in my life and I’m so grateful, but at the same time, the grass is always greener. There’s so many things that I struggle with on a day to day basis and there are some struggles that I definitely don’t share. There’s definitely months and months on end where I want to be [someone else]. My number one priority in life is genuine relationships and friendships between me and other people. Without that nothing else matters to me.

Obviously, with fame comes backlash. A lot of the criticism towards you has accused you of no longer being relatable now that you’re successful. Does stuff like that still get to you?

It bummed me out a lot in the beginning, because I was like, “Okay, wait a minute, y’all — that’s not my fault!” I was just doing this for fun, and so it was out of my control what happened next. Listen, I get it. Weird shit has happened to me. But I’m still the exact same me that I was when I started my channel, if not a more mature and a better person. I understand it now.

This is the most realistic portrayal of hot people on TikTok I’ve ever seen.

Democratic senators weren’t getting meetings with Trump’s AG pick. Republicans realized it was a bad...
Protesters tore down a statue in the former capital of the Confederacy. More may follow.
The most chilling aspect of Trump’s Monday night crackdown on law-abiding protestors
Protests aren’t what they look like on TV
Is a super-sized agenda the key to Democrats’ 2022 success — or their demise?
A new poll finds strong support for the Supreme Court ending LGBTQ discrimination