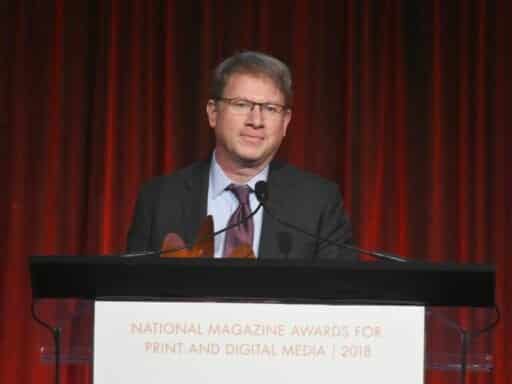 The editor of The Atlantic maligned a reporter for getting the story right.

The Atlantic Editor-in-Chief Jeffrey Goldberg took heat on Twitter Thursday for remarks he made in an interview about why there are so few women and people of color writing cover stories at his magazine. Then he tried to pin the blame for his own words on the female journalist who published them.

Goldberg spoke with Nieman Lab’s Laura Hazard Owen about recent diversity achievements at The Atlantic, when he conceded that the writers of the print edition’s most important stories are overwhelmingly white and male. Nieman Lab noted that of the 15 issues published this year, 11 had cover stories written by men.

It’s really, really hard to write a 10,000-word cover story. There are not a lot of journalists in America who can do it. The journalists in America who do it are almost exclusively white males. What I have to do — and I haven’t done this enough yet — is again about experience versus potential. You can look at people and be like, well, your experience is writing 1,200-word pieces for the web and you’re great at it, so good going!

That’s one way to approach it, but the other way to approach it is, huh, you’re really good at this and you have a lot of potential and you’re 33 and you’re burning with ambition, and that’s great, so let us put you on a deliberate pathway toward writing 10,000-word cover stories. It might not work. It often doesn’t. But we have to be very deliberate and efficient about creating the space for more women to develop that particular journalistic muscle.

It’s difficult to take this position seriously since there are obviously lots of women and people of color who already have the particular journalistic muscle required to write excellent long-form nonfiction, as evidenced by the fact there are lots of women and people of color doing it all across America, including for the Atlantic! For example, The Case for Reparations by Ta-Nehisi Coates, changed the political debate inside the Democratic Party on the question of reparations. Why Women Still Can’t Have it All, by Anne Marie Slaughter, is a defining piece of our era on women and work.

The most charitable view here is that Goldberg was thinking about how to create a pipeline of diverse, future talent for The Atlantic. (Executive Editor Adrienne LaFrance put it this way.) But instead of attempting to explain he misspoke or offer some context, Goldberg responded to critics by claiming Hazard Owen misquoted him. He even said that he had requested a correction.

But Goldberg had not asked for a correction and The Atlantic does not plan to ask for one, either, a publicist confirmed to Vox.

Goldberg did not even speak with Hazard Owens before he sent the tweet claiming he had asked for a correction. She tweeted “I was blindsided by those comments.” Hazard Owen recorded the interview, stands by the quotes, and Vox has confirmed this.

Politicians, public figures, and other savvy players do this kind of thing — they blame the reporter when they look bad in a story. But Goldberg isn’t a politician or a celebrity. He is a journalist — the leader, in fact, of an institution built on journalistic credibility and ethics. But instead of living those values, he apparently decided to protect himself, while maligning a reporter doing her job.

If Goldberg wants to help women build the muscle necessary to write long-form journalism, he should credit reporters like Hazard Owen, not try to gaslight them.

Goldberg hasn’t taken down his claim that he asked for a correction, but he did send fresh tweets attempting to explain what he had meant to say. “It went from him saying he was misquoted to being misunderstood,” Hazard Owen told me. “Those are two different things, obviously.”

The irony of all this is that the point of the interview was to highlight The Atlantic’s recent success in promoting women. A magazine that was once an old-boys club is now led by a team of 63 percent women. LaFrance, who participated in the interview, is now the publication’s executive editor — the first woman in that position in the magazine’s history. (LaFrance wrote for Nieman Lab before joining The Atlantic as their technology editor and then their website editor. I also wrote for Nieman Lab, nine years ago.)

“I feel bad. I genuinely think it’s a shame that it distracts from the story about the women being promoted at The Atlantic,” Hazard Owen said. “At the same time it shows how complicated this stuff can be and how blind people can be even when they’re trying really hard.”

Hazard Owen hopes the flap doesn’t deter newsroom leaders from having an open and honest conversation about the challenges of diversity.