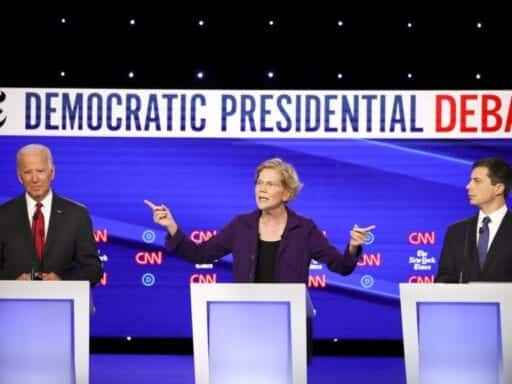 Warren got a frontrunner’s treatment over the hard questions of Medicare-for-all.

Sen. Elizabeth Warren (D-MA), having established herself as one of the two leading contenders, came under repeated attack over her support for Medicare-for-all and the question of how to pay for it.

Warren took the first health care question from moderators: Would her health care plan raise taxes on the middle class? She dodged the narrow question of whether taxes would increase and instead argued that overall costs for those families would go down, because their health insurance premiums and out-of-pocket costs would be virtually eliminated.

That has become Warren’s stock answer throughout the debates, which have typically kicked off with a version of this question. (Tuesday’s debate shook it up a bit by starting with a question about impeachment.)

She later added an ironclad promise: “I will not sign a bill into law that does not lower costs for middle class families.”

Warren was quickly criticized from both the right and the left: Pete Buttigieg, the mayor of South Bend, Indiana, and Sen. Amy Klobuchar (D-MN) tweaked Warren repeatedly for not saying that taxes would need to increase to pay for a single-payer Medicare-for-all plan that covers every American. Sen. Bernie Sanders (I-VT), who wrote the Senate Medicare-for-all bill that Warren supports, said Warren wasn’t being direct about the implications of the plan.

Sanders said taxes would go up, but then pivoted to the same case Warren was making: total costs would decline because premiums, copays, and cost-sharing would be a thing of the past.

Under Medicare-for-all, most Americans would pay a larger tax bill to the federal government. But private insurance premiums would be eliminated, as would out-of-pocket costs under Sanders’s bill. The argument from Sanders and Warren is that middle-class families end up with a good deal in that trade, but whether that’s true is a difficult question to answer without an analysis from a source like the Congressional Budget Office.

A RAND study of single-payer in New York state suggested that consumers might experience a 1-for-1 taxes-for-premiums trade under such a bill. But other studies, including one cited by Biden at the debate, indicate otherwise.

Warren has generally sought to align herself with Sanders on Medicare-for-all, while parrying the attacks pushed by debate moderators, center-left Democrats, and the GOP. And she’s succeeded. But Tuesday night made clear that her strong polling numbers have made her a target.

The center-left Democrats see Warren as vulnerable on health care

The Buttigieg campaign said before the debate that their candidate would attack Warren over Medicare-for-all, contrasting her roundabout answer to the tax question with her detailed plans on other policy issues. When he got the chance, Mayor Pete went for it.

“A yes or no question that didn’t get a yes or no answer. This is why people are so us from are frustrated. Your signature is to have a plan for everything, except this,” he said to Warren. “No plan has been laid out to explain how a multi-trillion dollar hole in this plan that Senator Warren is putting forward is supposed to get filled in.”

Buttigieg instead made the case for “Medicare for all who want it.” That concept, also broadly supported by Biden, would allow existing private insurance to continue while also creating a new government insurance plan that anybody — from the uninsured to people who have employer-sponsored insurance now — could join.

He emphasized the value of choice, while Warren warned that any plan that preserves private insurance runs the risk of people discovering in a moment of need that their insurance doesn’t cover as much as they thought it would.

To be fair, the kind of plan Buttigieg supports would include regulations designed to prevent that from happening. On the other hand, there would be substantially high out-of-pocket costs for health care under his plan than single payer, which effectively eliminates them.

The other notable moment came when the conversation involved Sanders. He said he would be direct about the need for tax increases — an implicit dig at Warren, his top rival for progressive votes.

“I do think it is appropriate to acknowledge that taxes will go up. They will go up significantly for the wealthy and for virtually everybody, the tax increase will be substantially less,” Sanders said. Substantially less than what they were paying for premiums and out-of- pocket expenses.”

(Klobuchar, one of the more moderate Democrats on stage, credited Sanders — “Bernie is being honest” — before digging in against Warren. “We owe it to the American people to tell them where we will send the invoice.”)

There was a fundamental difference among the Dem candidates on stage, as there has been in every iteration of this debate. The progressives believe a full overhaul is the only way to guarantee health care as a human right. The moderates argue that Democrats can build on the existing system.

But the reason the conversation revolved around Warren is her newly minted status as a top contender for the 2020 Democratic nomination. With frontrunner status comes scrutiny.

More men are dying from coronavirus than women. Why?
Teens are calling themselves “ugly” on TikTok. It’s not as depressing as you think.
Study suggests Democrats should be running more ads about Biden, fewer about Trump
These AI-generated coronavirus memes are better than human-generated ones
9 charts that explain the coronavirus pandemic
A brief guide to the State of the Union guests