Facebook is lifting its political ad ban — in Georgia only 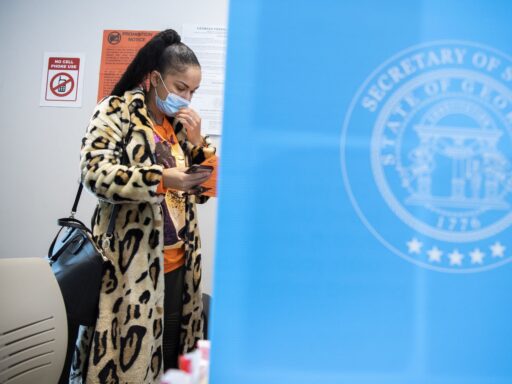 An extended pause on political ads had complicated the Senate runoffs.

Less than a week after Joe Biden secured a victory in the 2020 presidential election, it looked like Facebook’s post-election plan was backfiring.

In November, the company announced it would extend its ban on political ads for at least another month, and possibly longer, in an attempt to quell confusion over an election that President Donald Trump lost but still hasn’t conceded. Google similarly told advertisers it was unlikely to lift its political ad ban in November or December, according to the Wall Street Journal. Then, last week, Google lifted its ban on political advertisements.

On Tuesday, Facebook said that it had too had changed course, announcing that it would lift its political ad ban for the campaigns in Georgia. The announcement came following criticisms from both the Republican and Democratic Senate candidates in the race, and after the company had said it did not have the technical ability in the short-term to make exceptions to its national political ad ban. The company’s overall hold on political ads remains in effect, according to a blog post published by the company.

“[W]e have developed a process to allow advertisers to run ads with the purpose of reaching voters in Georgia about Georgia’s runoff elections,” said the post, adding that it would focus on onboarding advertisers with “direct involvement” in the Georgia election.

Since the 2016 election, Facebook has sought to avoid intense and continued criticism over its policies on political ads. Now, as the latest presidential election season is drawn out by an extra couple of months due to the dual runoff in Georgia that will decide control of the Senate, some claimed the political ad ban’s extension constituted voter suppression.

The frustration with Facebook’s handling of the election extends well beyond its political ad policy. Democrats and others have condemned the social media platform for enabling viral misinformation. The Biden campaign, in particular, has criticized Facebook’s approach, which often involves applying mealy-mouthed labels to content rather than removing posts that push conspiracy theories about voter fraud and sow doubt in the election. At the same time, Republicans complain that Facebook is systematically biased against conservatives and that tech companies unfairly censor right-wing voices. (These complaints usually lack evidence.)

The week after the election, Facebook seemed to respond to the litany of criticism in a blog post. The company wrote that, despite conservatives frequently dominating the lists of the most-engaged content on its platform, most of what people see on Facebook is not hyperpartisan political content.

Both sides are upset about how the platform treats organic content, but they’re also anxious about maintaining their ability to advertise on Facebook — a way to more directly spread their messaging on the site. So as the presidential election begins to appear in our rearview mirror and the Georgia runoff approaches, the problem of Facebook being bad for democracy — one that Facebook itself has admitted to — isn’t going away.

The Georgia runoff has both parties mad at Facebook — again

Because Facebook and Google were not allowing any political ads to run on their platforms, which is an extension of previous policies, the candidates hadn’t been able to use the two highly valued digital platforms to reach voters with advertisements or supply them with information about Georgia’s somewhat unusual runoff-election process. This, of course, is happening in the midst of a pandemic, when in-person campaign activities are limited.

While Google has not revealed much about its plan to extend the political ad ban, Facebook’s director of product management, Rob Leathern, offered some detail about his company’s decision on Twitter, explaining that the company’s systems don’t have a way to enable an exemption to the political ad pause for individual advertisers.

We do not have the technical ability in the short term to enable political ads by state or by advertiser, and we are also committed to giving political advertisers equal access to our tools and services. (4/4)

Critics quickly pointed out that Facebook, which is worth hundreds of billions of dollars, has had years and a seemingly endless supply of resources to build this feature.

Now, Facebook seems to have figured out how to make such an exception work. Starting Wednesday, previously approved advertisers working on the race in Georgia will be able to run campaigns through Facebook’s system, the company said in the Tuesday blog post. Facebook said its decision was influenced by experts who emphasized the importance of Facebook to political campaigns. The company also emphasized that it was continuing its election integrity efforts — including helping voters sign up to vote in runoff before the registration deadline last week — and directing voters to accurate information about the election.

The extension of the ad ban had left the Georgia Senate candidates to question how Facebook — and, to a lesser extent, Google — would continue to impact the election. The Democratic Georgia Senate campaigns have accused Facebook of allowing its algorithms to boost misinformation and hyperpartisan, right-wing accounts.

Miryam Lipper, communications director for the Ossoff campaign, told Recode in a statement in November that the companies “are putting their fingers on the scale for millionaire Republican candidates” and “ignoring the rampant disinformation on their platforms.” Terrence Clark, a spokesperson for Warnock’s campaign, said that by “preventing campaigns from sharing crucial information about how to register to vote, sign up for an absentee ballot, and how to ensure their vote counts,” the platforms were engaging in voter suppression.

Meanwhile, Republicans had resorted to accusing the social network of anti-conservative bias, which has become the party’s signature talking point on tech companies. In a tweet Thursday, Loeffler accused the companies of “silencing conservatives” and “suppressing free speech.” Perdue’s campaign spokesperson told Recode in November the bans constituted “an infringement of basic First Amendment rights.”

While their particular grievances may be different, politicians from both parties have been increasingly vocal about their frustrations with Facebook since the 2016 election. Things especially heated up in the weeks before November 3.

For example, conservatives fumed after the platform limited the distribution of a New York Post story about Hunter Biden. The outrage ultimately spurred a Senate hearing in which Republicans pushed their claim that Facebook, among other social media companies, was tampering with the election. Members of both parties were also angered when Facebook inadvertently blocked a slew of campaign advertisements from going up days before the election.

The frustration over Facebook’s ad policies reflects both sides’ broader frustrations with its handling of organic content. Democrats seem like they’re only growing more upset about rampant misinformation on the platform in the days after the election. Bill Russo, a Biden spokesperson, accused the company of “shredding the fabric of our democracy” in a series of November tweets lambasting Facebook’s failure to clamp down on content that promoted Trump’s false accusations of widespread voter fraud and claims of victory.

We knew this would happen. We pleaded with Facebook for over a year to be serious about these problems. They have not.

Our democracy is on the line. We need answers.

At the same time, conservatives, including the Georgia Republican Senate candidates, had continued to argue that Facebook is censoring them.

Other Republican frustrations with Facebook concern its voter registration efforts. Trump’s digital director once argued, without evidence, that Facebook’s attempt to register voters was a ploy to register more Biden voters than Trump voters. Some Republican secretaries of state even wrote to the company objecting to its Voter Information Center, an online platform for helping people register to vote, discouraging the effort and arguing it was redundant.

With what’s happening with Georgia, it seems clear that neither side will let up in their criticism of Facebook. At the same time, this latest episode is a reminder that companies like Facebook and Google have by no means perfected their policies toward US elections, and that political content, from misinformation to candidate advertisements to hyperpartisan Facebook pages, do not exist in a vacuum.

In this most recent case, the move to extend a ban on political ads might have had a technical explanation. But for the candidates in Georgia, it had a real impact on their campaign plans. Even with Facebook’s political ad being lifted now, the candidates have lost out on more than a month of time to push digital advertisements, and missed the critical window for registering new voters in the state.

After all, Facebook’s policies leading up to one state’s runoff elections could influence which party controls the Senate — and whether Biden can push through a ledger of Democratic policies without hurdles from Republicans. It’s a reminder that the company’s influence over politics seems to only be growing.

Update, December 15: This article has been updated to reflect Facebook and Google changing their political ad policies.