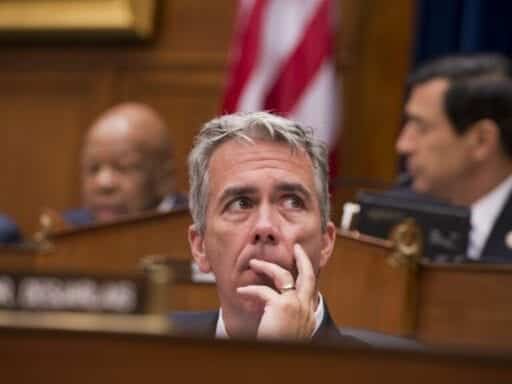 Walsh says he’s running for president because “the country is sick of this guy’s tantrum.”

“I’m running because [Trump is] unfit, somebody needs to step up and there needs to be an alternative,” Walsh said on ABC’s This Week. “The country is sick of this guy’s tantrum, he’s a child.”

“We’ve got a guy in the White House who is unfit, completely unfit to be president and it stuns me that nobody stepped up” https://t.co/P6iz1j1VA4 pic.twitter.com/0Sct3l7zEc

Primarying Trump will be far easier said than done. First, Walsh wouldn’t be alone in doing so — former Massachusetts Gov. Bill Weld has also launched a primary campaign, and former South Carolina Republican lawmaker Mark Sanford says he is weighing one as well. But Trump remains extremely popular among Republicans, and some states are aiming to cancel their primary elections in order to protect him.

Walsh downplayed these challenges, telling This Week host George Stephanopoulos Republican support for Trump is high only because “they don’t have an alternative,” and that he believes he will garner support because “most of my former colleagues up on the Hill agree privately” with his criticisms of Trump. He also claimed the president must be primaried because “most of my former colleagues think Trump’s going to lose in November.”

One major challenge Walsh will have to overcome — beyond the fact that he is running against a sitting president popular with his party — is the matter of the former representative’s, shall we say, “colorful” past, which ranges from owing hundreds of thousands of dollars in child support payments to tweeting that if Donald Trump lost on Election Day, he’d be “grabbing” his “musket” to presumably mount some sort of violent protest. Perhaps more concerningly, Walsh has also shown deep passion for birtherism, racist invective, and anti-Muslim conspiracy theorizing about Barack Obama, as tweets collected by the Daily Caller’s Peter J. Hasson show.

Obama is a Muslim

Once again blacks in America try to burn their own neighborhood down.

Uh…setting fire to businesses in your own hood accomplishes what?

Stephanopoulos asked Walsh to address some of his past tweets that read, “We LOWERED the bar for Obama. He was held to a lower standard cuz he was black” and “If you’re black & a woman, you can say dumb things. Lowered bar.”

The now 2020 candidate turned things back on Trump, and said the president’s racism has led him to regret his own, “The beauty of what President Trump has done is he’s made me reflect on some of the things I’ve said in the past. I had strong policy disagreements with Barack Obama, and too often I’ve let those policy disagreements get personal.”

Walsh further contrasted himself with the president on this point by saying he’s apologized for some of the racist and Islamophobic things he’s said about Obama, but that “we have a guy in the White House who has never apologized for anything.”

The comments mirror those Walsh has made on Twitter in recent days, when the candidate has attempted to walk back his many years of Trumpian Twitter talk.

.@realDonaldTrump represents the absolute worst of us: Dishonest, cruel, ignorant, indecent, narcissistic, disloyal, unpatriotic, and cowardly. And I helped create him.

And for that I apologize.

It’s not exactly clear which Republican constituency would find Walsh appealing: Republican voters turned off by Trump’s own conspiracy theorizing and racism are unlikely to support another Republican prone to the same, his current disavowals of such behavior notwithstanding, and Republican voters who don’t find Trump’s invective unappealing will simply vote for him again.

So if I understand the political news from my time off, Republican primary voters next year are being offered a choice between a candidate who thought Obama was a Muslim and one who thought he was a Kenyan. Can’t wait for the debate.

However, Walsh has already begun to reach out to some of Trump’s high profile opponents. After publishing an op-ed in the New York Times explaining the need for a primary challenge, last week, Walsh reportedly met with George Conway, a conservative lawyer and anti-Trump voice who is also the husband of Kellyanne Conway, a high-profile Trump aide, to discuss a role for Conway in a Walsh administration.

And among the people who think that Walsh stands a shot in an effort to primary Trump is Bill Kristol, former editor of the since-shuttered Weekly Standard magazine and a long-time conservative writer who told the New York Times, “The fact that he was a Tea Party congressman who voted for Trump in 2016 gives him an ability to speak to Republican primary voters that ‘Never Trumpers’ like me don’t have.”

Whether Kristol is correct in this belief remains to be seen. The Trump campaign is unbothered by the challenge however. ABC News reports that when asked about Walsh’s announcement, the Trump campaign responded with just one word: “Whatever.”

Vox Sentences: The GOP puts the Kochs on ice
The first Democratic debate qualification rules — and controversies — explained
Maxine Waters could be a serious problem for Trump if Democrats win the House
3 top Trump advisers are considering resigning following the Capitol insurrection
How the Navajo Nation helped Democrats win Arizona
Trump’s attempt to smear DACA recipients as “hardened criminals” is untethered from reality