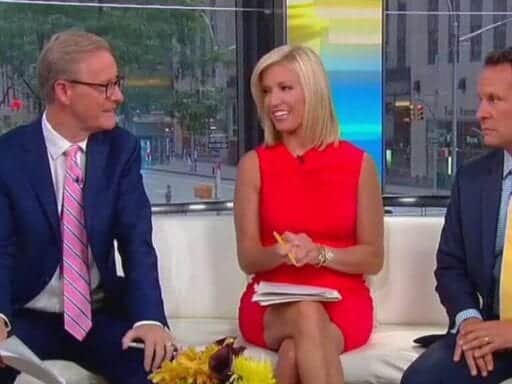 Their defense of one of Trump’s most corrupt proposals suggests they think their viewers will believe anything.

President Donald Trump’s push to hold next year’s G7 summit at Trump Doral, a Florida resort he owns and profits from, was one of the more brazenly corrupt things he’s suggested so far. But if you thought Trump’s attempt to turn one of the world’s foremost diplomatic summits into a free promo for one of his resorts might be a bridge too far even for Fox & Friends, think again.

On Tuesday, Trump’s favorite show — one that remains the most watched among all the cable news morning programs — went to extreme lengths to justify Trump’s desire to have the G7 at one of his resorts.

“He would want to do it there anywhere, whether he owned it or not,” host Brian Kilmeade said, credulously, prompting Ainsley Earhardt to interject, “He said they looked at 12 different sites. ‘Why don’t we do it? We have the facilities!’”

Fox & Friends’ third co-host, Steve Doocy, also got in on the act, noting that “apparently the Secret Service did inform the Doral, Florida, police department two months ago that the resort was one of about a dozen potential venues for the summit” — as if planning corruption in advance somehow makes it okay.

Brian Kilmeade says the Trump Doral resort is “the perfect site” for the next G7 summit. pic.twitter.com/NriuxbisQW

Later, Earhardt said that holding the next G7 at Trump’s private resort in Doral — a club where initiation fees run to $150,000 in suburban Miami — “would be a beautiful place” for the summit, because world leaders could “see what our country looks like.”

Fox & Friends’ support of Trump on Doral was an exception; the network basically ignored the story the rest of Tuesday. According to SnapStream transcripts, as this is published on Tuesday afternoon, the word “Doral” hasn’t been mentioned since Fox & Friends hosts sang the praises of the club.

Trump’s effort to sell his resort at a diplomatic event, briefly explained

Trump first raised the idea of hosting next year’s meeting at his Doral, Florida-based golf resort during a bilateral meeting with German Chancellor Angela Merkel on Monday, the last day of this year’s G7 in France, saying of Trump Doral that “we haven’t found anything that could even come close to competing with it, especially when you look at the location right next to the airport” in Miami.

Trump’s comments raised some eyebrows, and during his G7-ending news conference in France on Monday, Trump was asked by NBC’s Hallie Jackson to respond to people who are concerned that his push to have the 2020 G7 at Doral is an example of how he’s profiting from the presidency. He responded by plugging Trump Doral.

“With Doral we have a series of magnificent buildings — we call the bungalows — they each hold from 50 to 70 luxurious rooms, with magnificent views. We have incredible conference rooms, incredible restaurants. It’s, like, such a natural,” Trump said, before adding, dubiously, that “in my opinion I’m not going to make any money.”

Shortly after the press conference ended, the official White House Twitter account seemed to make the announcement official in a tweet that doubled as a taxpayer-funded promotion of Trump’s private club.

President @realDonaldTrump shares the location of the next @G7 summit, hosted by the United States! pic.twitter.com/CMtHG2Dump

Then on Tuesday, Trump — freshly back from the just-completed G7 in France — went on Twitter to try to twist a corruption scandal into one about bedbugs.

“No bedbugs at Doral,” he tweeted. “The Radical Left Democrats, upon hearing that the perfectly located (for the next G-7) Doral National MIAMI was under consideration for the next G-7, spread that false and nasty rumor. Not nice!”

No bedbugs at Doral. The Radical Left Democrats, upon hearing that the perfectly located (for the next G-7) Doral National MIAMI was under consideration for the next G-7, spread that false and nasty rumor. Not nice!

Trump was alluding to a 2017 settlement his lawyers reportedly reached with a man who, according to the Miami Herald, “woke up from a night’s sleep at the resort in March 2016 with dozens of [bedbug] bites.” That man, identified as New Jersey insurance executive Eric Linder, later sued Trump Doral, and photos of the bites on his back and neck continue to circulate around the internet.

But the bedbugs situation pales in comparison to the president leveraging his office to not only make money for the family business but provide it with free international promotion as well — a move that Sen. Ron Wyden (D-OR) described in a statement as “one of the most egregious examples of corruption and self-dealing in a presidency replete with them.”

Trump’s supporters on America’s top-rated cable news network were ready to defend him. It’s enough to make one wonder what they wouldn’t defend.

Trump has fired the intelligence watchdog who first flagged Ukraine whistleblower complaint
The Lost Year: A quiet year, alone in one’s head
Amazon is selling its cashierless technology to other vendors, starting with airports
The controversy around a black man killed by police in his own home, explained
Why bird nests aren’t covered in poop, explained to kids
A life insurance company wants to track your fitness data