Giuliani: Mueller can interview Trump if he can prove the president committed a crime 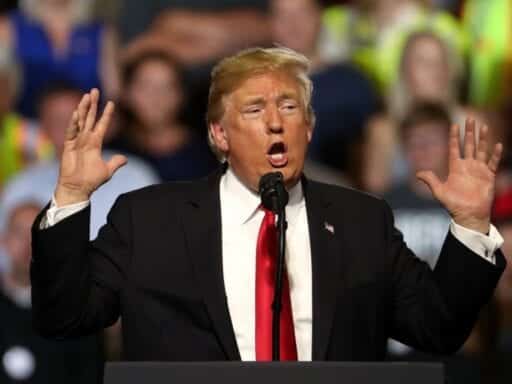 Trump’s lawyers keep stalling — and are waging their PR battle against Mueller in the meantime.

Rudy Giuliani, Trump’s attorney, is again playing hardball with special counsel Robert Mueller — and it’s looking even less likely that the president will sit down for an interview with Mueller’s team.

The New York Times’s Michael Schmidt and Maggie Haberman reported that Giuliani is setting new terms for the interview: Mueller must show evidence that Donald Trump committed a crime and that an interview is necessary, or forget it. Trump’s legal team is also insisting Mueller prove that he exhausted all other avenues and that he has no choice but to interview the president.

“If they can come to us and show us the basis and that it’s legitimate and that they have uncovered something, we can go from there and assess their objectivity,” Giuliani told the Times.

The prospect of sitting for an interview with Robert Mueller has gotten increasingly fraught since the president shook up his legal team months ago, bringing on former New York City Mayor Rudy Giuliani and Emmet T. Flood, who represented Bill Clinton in his impeachment. Both embarked on a more combative, aggressive approach toward the Russia investigation compared to the more cooperative stance favored by his former attorneys.

Giuliani has shifted the terms (and deadline) of a Trump-Mueller interview more than once since joining Trump’s legal team. Giuliani had said in May that he was working with the special counsel to narrow the scope of the investigation, and that no decisions would be made until after Trump’s summit with North Korean leader Kim Jong Un. The summit came and went, and the deadline was July 4.

As the back-and-forth over the Trump interview continues, Giuliani is waging a PR campaign against Mueller and the investigation that’s been echoed in his boss’s Twitter feed. According to the latest Times report, this seems to be the crux of the strategy — delay until the midterms and damage the investigation’s credibility. (It may also force Mueller to subpoena Trump — which will set off a protracted, likely messy, court battle.)

Trump’s lawyers have suggested Mueller will abide by Department of Justice guidance that says a sitting president can’t be indicted — which would mean Mueller’s most likely option is a written report, which could make its way to Congress. If such a report is damning against Trump, and if Democrats retake the House of Representatives in the fall, the chance of impeachment increases. But if the public can be convinced, that, as the president says, that the special counsel’s investigation is a total “WITCH HUNT,” lawmakers might be more leery of taking on the president.

“Nobody is going to consider impeachment if public opinion has concluded this is an unfair investigation, and that’s why public opinion is so important,” Giuliani told the Times.

Giuliani, Trump, and his allies in Congress have done their best to discredit Mueller. Giuliani played up the debunked “Spygate” conspiracy — that the FBI planted a spy on the Trump campaign — admitting last month that the drama was conjured up “for public opinion.” The House of Representatives is waging war against Deputy Attorney General Rod Rosenstein — Mueller’s boss — sanctioning him on the House floor for failing to turn over requested documented about the investigation.

The war against Mueller has shown some signs of working. A Politico/Morning Consult poll in June put Mueller’s favorability at just 32 percent. More people — 36 percent — had an unfavorable opinion of Mueller than a favorable one. Opinions have dipped sharply among Republicans, too: According to that same poll, 53 percent of Republicans viewed Mueller unfavorably, up from 27 percent in July 2017, according to Politico.

But the Times pointed to a Washington Post-Schar School poll, published Friday, that put Mueller’s approval rating at 49 percent among all adults — and it reached 52 percent among registered voters.