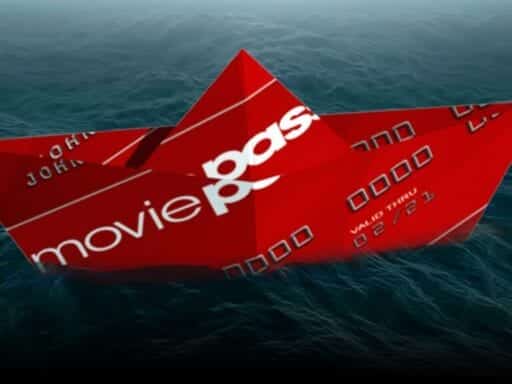 The movie ticket subscription service finally shut down for good in September. (Maybe.)

The news, when it finally arrived, was swift and decisive: MoviePass was dead. After more than a year of catastrophes that left customers and investors increasingly confused and irate, the discount movie ticket subscription service kicked the can on Saturday, September 14.

In a way, the biggest surprise was that it lasted as long as it did. MoviePass was six years old, with a modest customer base and several reasonably priced plans, when it was acquired in 2017 by data analytics firm Helios & Matheson. The company soon announced a new barnburner of a deal: For $9.95 per month, subscribers could see up to one movie per day. All they needed to do was use their MoviePass card — which looked and acted like a debit card — to “buy” their ticket, and MoviePass would reimburse the movie theater for the full cost. Everybody wins.

Except MoviePass. As I wrote last summer, the company’s strategy was obviously unsustainable, but it was banking on something big: the idea that it could eventually leverage an enormous customer base to broker profit-sharing partnerships with movie theaters and distributors.

Whether that would mean pocketing a cut of concessions sales, giving priority promotion berths on its apps to specific films, or marketing services that might enhance a night out at the movies (like discounts for ride-hail services or specials at nearby restaurants), the key to MoviePass’s success was expected to roughly mimic the one that’s powered magazines for a long time: Get a huge number of people to subscribe at a very low cost, and then convince advertisers and partners to pay you for access to those customers.

It was a big gamble, and for MoviePass, it didn’t work. It’s not that the service had trouble selling subscriptions — after the introduction of the $9.95 unlimited plan, membership jumped from about 20,000 in August 2017 to 3 million at its highest point in 2018.

But Ted Farnsworth (former Helios & Matheson CEO) and Mitch Lowe (MoviePass’s CEO and a former executive at Netflix and Redbox) seemed to have never really grokked the way the movie theater business works. In most cases, film distributors make a deal with theaters to show their films, usually for an exclusive period of time, and then the distributors share profits from the ticket sales. MoviePass was trying to insert itself into that equation as a middleman, and that’s where it failed — particularly in its very public fight with AMC, in which AMC emphatically denounced what MoviePass was trying to do.

MoviePass fought back with rhetoric, and in some cases, even blocked its customers from seeing films in AMC theaters. But there was good reason for AMC’s stance. AMC didn’t need MoviePass; it knew it could just create its own MoviePass-style system and bypass the middleman altogether, and that is exactly what it did, launching its Stubs A-List program in June 2018 (and enjoying extreme success with it). As Nick Statt points out at The Verge, MoviePass’s business model is easily replicated, and movie theaters can repeat the model with tweaks aimed at their individual customer bases (like access to 3D movies, or even just a service that — unlike MoviePass — reliably works).

Some of MoviePass’s business decisions also seemed odd, at best — particularly the launch of MoviePass Films, a production company presumably intended to create additional revenue streams and brand recognition for the company. A few of the movies it invested in made a measure of sense; for instance, the production company took an equity stake in two festival-favorite films from NEON (the distribution arm of Alamo Drafthouse company), Border and Monsters and Men. Others were baffling; it invested in Gotti, the widely reviled mob movie starring John Travolta, and then had to resort to “fake news” tactics to get people to see it. As late as December 2018, with MoviePass in turmoil, it was signing Bruce Willis to a three-movie contract (one of the three films, Trauma Center, is now in post-production).

In addition to floundering in its strategy, MoviePass may have also adopted some particularly lousy business practices — and not just the ones that sent subscribers running in the opposite direction once they got fed up with the frequent service outages and constantly changing pricing structures. The company is currently under investigation for securities fraud and for misleading its investors; it’s also been named in several class action lawsuits, which allege that the company defrauded customers. And in a particularly galling move, news surfaced in August that the company may have changed the passwords of particularly heavy users in order to stop them from accessing the service.

And yet, MoviePass did provide a proof of concept, and whetted the appetites of audiences for movie ticket subscription services. The subscription model, as I wrote last year, has growing appeal, particularly to millennials seeking financial predictability. The biggest three movie chains in the country — AMC, Regal, and Cinemark — have all unveiled their own subscription services, and other movie theaters are experimenting with replicating the model as well. It’s possible to imagine a future in which people devote a line item in their household budget to movie ticket subscriptions, alongside Netflix, HBO, Disney+, and other streaming platforms whose content serves their interests.

But it looks as though MoviePass might live to see another day after all. Shortly after the service’s “final” demise was announced, news surfaced that Farnsworth, who had been CEO of MoviePass’s parent company Helios & Matheson, had resigned both his CEO job and his spot on the board and then made an offer to buy both Helios & Matheson and the MoviePass service. “I believe there is great unrealized value in MoviePass and we want to rebuild and make sure it reaches its full potential,” Farnsworth said in a statement. “I have always believed in the business model and the brand Mitch Lowe and I built at MoviePass. There’s tremendous appetite for movie theater ticket subscription.”

Some of this seems a tad delusional — at this point, the MoviePass brand is unlikely to ever instill confidence into the hearts of former subscribers. But we’re now in an era when movie theaters are not just competing with other movie theaters, but with streaming services like Netflix, which are shortening the window between when a film opens in theaters and starts streaming for home viewers. Perhaps there’s still an opportunity for Farnsworth, Lowe, and whatever MoviePass becomes — as long as it’s planned a little more carefully.

Protesters at the Nevada Democratic debate were immigrant rights activists
9 women to watch from this year’s midterms
Savannah Guthrie delivered the Trump interview we’ve been wanting for years
Want to fix obesity and climate change at the same time? Make Big Food companies pay.
Who is Andrew Gillum? Meet Florida’s history-making Democratic nominee for governor.
Kamala Harris: “I may be the first woman to hold this office. But I won’t be the last.”