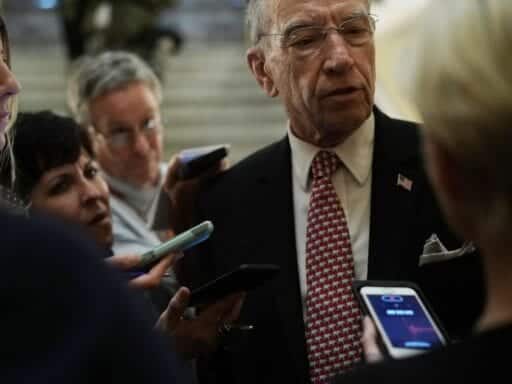 The Senate Judiciary Committee chairman later walked the comments back.

It wasn’t a great look: 11 white male senators, lined up to question the woman who’d come forward with sexual assault allegations against Supreme Court nominee Brett Kavanaugh — something that happened because there’s not a single female senator on the Republican side of the Senate Judiciary Committee. Committee Chairman Chuck Grassley (R-IA) has an explanation for that lack of diversity: Supposedly, Republican women don’t want to be there because it’s too much work.

The Wall Street Journal reported that Grassley made the assertion while speaking with reporters on Friday — and later walked it back.

“It’s a lot of work — maybe they don’t want to do it,” Grassley said. “My chief of staff of 33 years tells me we’ve tried to recruit women and we couldn’t get the job done.”

According to WSJ, Grassley later came back to clarify that he didn’t mean to single out women. .

“We have a hard time getting men on the committee. It’s just a lot of work whether you’re a man or a women, it doesn’t matter,” he said.

“It’s a lot of work – maybe they don’t want to do it,” Grassley said, explaining why there aren’t more women on the Senate Judiciary Committee. “My chief of staff of 33 years tells me we’ve tried to recruit women and we couldn’t get the job done.” https://t.co/UxFJMsOFV0

Further trying to clean up his comments, Grassley said that he hopes next year more women will join the judiciary panel and said he believes that “on average, any woman in the United States Senate, whether they’re on the Judiciary or any other committee, probably works harder than the average man.”

Grassley also said he thinks “probably five” would be the right number of women on the nine-member US Supreme Court. He voted to confirm Supreme Court Justices Sandra Day O’Connor and Ruth Bader Ginsburg, nominated by Presidents Ronald Reagan and Bill Clinton, respectively, and against the confirmation of Justices Sonia Sotomayor and Elena Kagan, both nominated by President Barack Obama.

The Senate Judiciary Committee is over 200 years old. Republicans still haven’t had a woman serve on it.

The Senate Judiciary Committee was established on December 10, 1816, according to the panel’s website, as a “forum for the public discussion of social and constitutional issues.” In the nearly 202 years since, Republicans haven’t been able to find a single woman to sit on the panel.

And it’s not that women aren’t in the Senate, both Republicans and Democrats. There have been a total of 52 women to serve in the Senate, starting with Rebecca Latimer Felton, who served for just 24 hours after being appointed in Georgia in 1922. Eighteen Republican women have served in the US Senate in its history.

There are currently 23 women serving in the Senate, 17 of whom are Democrats, and six of whom are Republicans: Sens. Lisa Murkowski of Alaska, Joni Ernst of Iowa, Susan Collins of Maine, Cindy Hyde-Smith of Mississippi, Deb Fischer of Nebraska, and Shelley Moore Capito of West Virginia.

Democrats have found women to fill out their Senate Judiciary Committee ranks. There are four women among its 10 members, including ranking member Sen. Dianne Feinstein from California.

That disparity didn’t do the Republicans any favors during the Kavanaugh hearings: The optics of 11 white Republican men interviewing the nominee and Palo Alto University professor Christine Blasey Ford, who has accused him of sexual assault (allegations he denied), were bad. That’s why the GOP brought on a female prosecutor to do some of the interviewing. And the all-white, all-male committee members advancing Kavanaugh’s nomination is a bad look, too.

The GOP appears aware of the optics, but instead of putting a woman on the committee, Grassley claimed they just can’t find one — despite at least five current members fitting the bill.

Rudy Giuliani: the Mueller indictments are great news for Donald Trump
The insurrection is happening at state capitols, too
How the 2010s changed health care
All of this week’s best new movies are about anxiety. In a good way.
Live results for 2 key abortion ballot initiatives
Why we’re reading bucket list books in quarantine