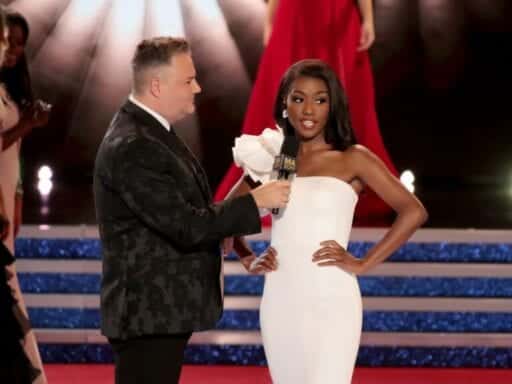 The revamped pageant even got a little political.

When Gretchen Carlson — the former Fox News anchor and Miss America 1989 — took over as chair of the Miss America Organization earlier this year, she promised that the 2019 pageant would “join the empowerment movement” and become “open, transparent, and inclusive” by judging contestants on their talking points and social impact initiatives rather than their outfits and looks. And at Sunday’s final competition, it seemed that Miss America 2.0 was indeed the (slightly) less pageant-y pageant that Carlson intended.

Thanks to sweeping changes announced this summer that included removing both the swimsuit and evening gown portions, as well as a major branding overhaul, this year’s event was markedly different from the others in the pageant’s 97-year history.

The viral highlight? Miss Michigan, Emily Sioma, introduced herself not with an overview of her college and major but by drawing attention to the ongoing water crisis in Flint. “From the state with 84 percent of the US’s freshwater but none for its residents to drink, I am Miss Michigan Emily Sioma,” she said.

“from the state with 84 percent of the u.s. fresh water but none for its residents to drink, i am miss michigan emily sioma” — the new #missamerica2019 pageant did not come to play pic.twitter.com/H05eifix2e

According to the Daily Beast, Sunday night’s competition, which aired live on ABC, was “50 percent less offensive than the average pageant, with 100 percent more pantsuits.” There were earnest calls from the contestants for everything from diversity to the importance of investigative journalism, women in STEM, and wheelchair adaptive sports, while the opening script relied heavily on words like “sisters,” “future leaders,” and “empowered.”

Yet despite reports of turmoil behind the scenes — as well as a very public rift between Carlson and the most recent Miss America, Cara Mund — Miss America 2.0 could provide a possible model for what beauty pageants might look like in the future.

Beauty pageants have a pretty sexist and racist history

Because women have always been judged heavily on their looks, beauty pageants have existed around the world for millennia. When Miss America debuted in 1921, it was to attract more crowds on the Atlantic City boardwalk, and audiences would clap for their favorite contestant, which accounted for 50 percent of the vote.

In the pageant’s beginnings, non-white women were not allowed to enter the competition. Even though the rule that required “contestants must be of good health and of the white race” was repealed in 1950, the first black contestant wasn’t included until 1970, and the first black winner was Vanessa Williams in 1984. It was the first time that a winner received death threats and hate mail, and also the first time that a contestant was forced to resign following the discovery of nude photographs (ones that she was told would never appear in print), leading to a contentious national conversation often tinged with racial undertones.

Meanwhile the second-most famous pageant in America, Miss USA, was co-owned by none other than Donald Trump between 1996 and 2015, a time in which the future president engaged in behavior such as entering the Miss Teen USA dressing room while contestants were changing and bragging about it. Trump, who remains very preoccupied with judging women’s appearances, went on to attack Alicia Machado, the Venezuelan Miss Universe, for gaining weight during the 2016 election.

The Miss America Organization has been plagued by scandals

It isn’t entirely surprising that the Miss America Organization has desperately attempted to shed its sexist past. Last December emails between CEO Sam Haskell and lead writer Lewis Friedman leaked in which contestants were referred to as “cunts” and called “piece of trash” and “huge,” among other misogynistic comments.

When Gretchen Carlson, who became a vocal advocate for #MeToo after settling a sexual harassment lawsuit against former Fox CEO Roger Ailes, took over as chair of the organization and named several more women to its board, the goal was to transform the pageant into one that focused less on the contestants’ looks and outfits and more on the social issues they champion.

But in doing so, another minor scandal erupted: In the weeks prior to this year’s pageant, Miss America 2018, Cara Mund stated in a public Facebook post that the organization “systematically silenced me, reduced me, marginalized me, and essentially erased me in my role as Miss America in subtle and not-so-subtle ways on a daily basis.” She accused the organization of prioritizing Carlson over her, as well as using passive-aggressive tactics to minimize her status.

Last week, a sash that read “Gretchen sucks” was placed on the statue of Miss America in Atlantic City, and several posters mocking Carlson with the words “So Fake” were hung from nearby traffic light poles.

Toward a feminist future of beauty pageants?

Despite the drama, however, it seems as though this year’s contestants largely adhered to the mission of Miss America 2.0. In place of the traditional evening gown portion, the women were free to wear attire that made them feel confident and expressed their personal styles. (Read: lots of jumpsuits).

Even the revamped pageant’s branding looks like that of a hip, socially aware startup — the hero image on its website is a cinemagraph of a woman in a billowy skirt leaping in Converse-like sneakers, while the font is, of course, a cool sans serif.

But besides Sioma’s bold statement about the water crisis in Flint, most of the contestants who had made it to Sunday’s finals stuck with less overtly political issues to champion — the environment, youth empowerment, and support for people with visual impairments, for example.

There were certainly politics present onstage a few nights before, however. During the pageant’s preliminary round on Friday night, Miss West Virginia, Madeline Collins, stated that “Donald Trump is the biggest issue facing our country. Unfortunately, he has caused a lot of divide in our country, and until we can trust in him and the choices that he makes for our country, we cannot become united.”

And on Thursday, when Emili McPhail (Miss Virginia) was asked how the NFL should respond to its players kneeling during the national anthem, she said that the protests were “absolutely about police brutality,” and that “kneeling during the national anthem is absolutely a right that you have, to stand up for what you believe in, and to make the right decision that’s right for you.”

This, perhaps, could indicate the changes coming to the beauty pageant world. And unlike the overwhelming majority of Miss America winners, this year the judges selected a nonwhite contestant, New Yorker Nia Imani Franklin, who chose youth art education as her social impact initiative.

Miss America 2.0’s goal is to make pageants more like serious job interviews. But to be clear, the Miss America pageant has always been a job interview — it determines the woman who will represent the organization over the next year in speaking and travel engagements. It’s just that being hot and likable can no longer be the only requirement.

However much this year’s pageant was a leap toward the future, it’s still difficult to imagine a Miss America who is queer (although 2016 saw the competition’s first openly gay contestant), who is disabled, who is fat, or who is trans- or gender nonconforming. It’s even difficult to imagine a winner whose personal style is a little off-base, who doesn’t have perfect hair, not to mention one who takes a stand on a controversial political topic.

These are ingredients that are baked in to the Miss America recipe, and though there are plenty of pageants that aim to subvert the norm — drag and queer subcultures have their own versions; there’s even an event to crown the “smallest penis in Brooklyn” — anyone hoping for a truly subversive Miss America probably shouldn’t bother holding their breath for Miss America 3.0.