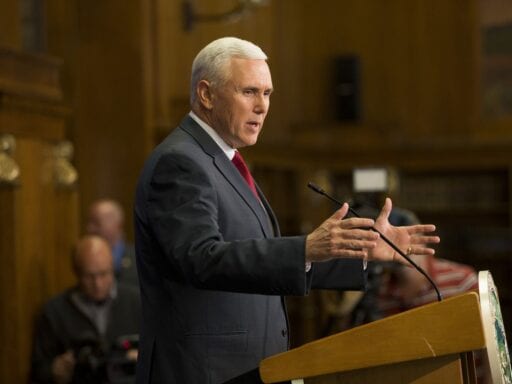 Share
Loading...
Vice President Pence has tested negative for the coronavirus, but health experts argue he should still be isolating himself. | Aaron Bernstein/Getty Images

An in-person debate would be “astonishingly risky.”

Amid a growing Covid-19 outbreak at the White House, public health experts are calling for Wednesday’s vice presidential debate between Vice President Mike Pence and Sen. Kamala Harris to be called off — or made virtual.

Pence has been exposed to several infected individuals, including President Donald Trump himself, who announced he’d tested positive for the coronavirus early Friday morning. Since Trump’s diagnosis, the vice president has been tested regularly, returning negative results each time. Nevertheless, public health experts have warned it would be astonishingly risky for him to participate in the upcoming in-person debate, which is set to be held in Salt Lake City, Utah.

Rochelle Walensky, an infectious disease expert at Harvard University, told the New York Times that “there is no way under the sun that Pence should be anywhere but in his home. He was sitting in a sea of people with [Covid-19].”

A negative test does not necessarily mean someone does not have Covid-19 because the amount of virus in an infected person can take time to reach detectable levels. And one’s status can change rapidly. For instance, White House press secretary Kayleigh McEnany had tested negative every day since Thursday, but announced on Monday that she had tested positive.

The Commission on Presidential Debates has said it will take some additional precautions in light of this, moving the candidates’ podiums for the vice presidential debate to 12 feet apart as opposed to the originally planned 7 feet. But USA Today Washington bureau chief Susan Page, who will moderate the debate, will still be less than 6 feet from Pence and Harris.

Trump and Democratic nominee Joe Biden were also 12 feet apart at last week’s presidential debate, but Biden is still potentially at risk. The candidates were indoors, where the virus can travel farther than the CDC-recommended distance of 6 feet, particularly if one is shouting, as everyone involved did at one point or another.

Given the inherent risk of any indoor event — particularly one that includes someone who has been exposed to Covid-19 — Kumi Smith, an assistant professor of epidemiology and community health at the University of Minnesota, told Vox that the safest course of action would be to make the vice presidential debate a virtual event.

“The thing I noticed when I watched the presidential debate was a lot of other people seemed to be gathered in the room unnecessarily,” Smith said. “These live events do seem to necessitate a lot of people coming into closer contact with each other in an indoor space than social distancing guidelines would currently recommend.”

Smith said if the debate is ultimately held in person, it should take place in a large ventilated space with as few people as possible in attendance. And David Celentano, chair of the epidemiology department at Johns Hopkins University, told Vox all participants should arrive at least 30 minutes early to receive a rapid Covid-19 test. He also recommended everyone in the audience should wear a face covering, a precaution not taken by many of Trump’s guests at the first presidential debate.

As Smith noted, these extra precautions are paramount considering the debates feature people who will be the next elected leaders of the United States. And in the case of Wednesday’s debate, they have additional importance given Pence would assume presidential responsibilities should Trump — who remains ill with Covid-19 — become incapacitated at any point due to his illness.

The debate commission has not made any decisions on altering plans for the last two presidential debates, scheduled for October 15 in Miami, Florida, and October 22 in Nashville, Tennessee. Both campaigns have indicated they would like to debate in person. Trump campaign adviser Jason Miller told Meet the Press on Sunday, “We see Joe Biden and Kamala Harris out there campaigning — certainly, they’re not asking for a remote debate.”

And Monday, Biden told reporters he would be comfortable attending both events in person “if the scientists say that it’s safe and the distances are safe.”