Here’s everything you need to know about the October debate 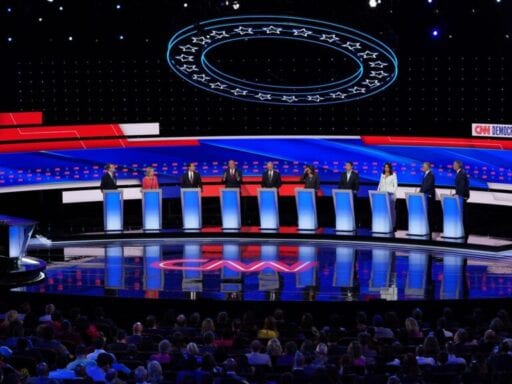 Democrats in the 2020 presidential primary have until the beginning of October to make it into the fourth Democratic debate, which will be held in Westerville, Ohio, on October 15.

And possibly on October 16, too.

While the September debate put 10 of the leading Democrats in the 2020 primary on stage together for one three-hour marathon debate, now 12 Democratic candidates have qualified for the October debate, and candidates have even more time to make it in. The debate will be hosted by CNN and the New York Times and be held at Otterbein University, outside of Columbus, Ohio.

That might mean the debates will go back to being split between two nights.

To make it on to the stage in October, Democratic candidates must raise donations from 130,000 people and earn 2 percent support in four polls approved by the Democratic National Convention between June 28 and 11:59 p.m. Eastern on October 1. Both Rep. Tulsi Gabbard (D-HI) and San Francisco billionaire Tom Steyer have qualified for the fourth debate, after coming in short to make it on the stage in September.

The thresholds to make the fourth debate are the same as the September one, but candidates have a little more time to qualify this time. That said, it’s clear that the these rules are already winnowing the field on the national stage.

One candidate has met just the donor requirement, but still fall short of the polling threshold:

And there are still 7 candidates that have not met either threshold:

The Democratic field has slimmed in the past month; New York Mayor Bill DeBlasio has dropped out, as has former Colorado governor John Hickenlooper, who has now decided he will challenge Republican Sen. Cory Gardner in the Colorado Senate race instead. Rep. Seth Moulton (D-MA) dropped out, as did Sen. Kirsten Gillibrand and Washington Gov. Jay Inslee, who has instead been elevated as Democratic candidates’ climate guru.

The debates serve as an important opportunity for smaller campaigns to get their message out to the rest of the country. But between the three rounds — and five nights — of debates, none of the break out moments have really stuck for lesser-known candidates. Instead, polling shows the Democratic primary increasingly looks like a three-way race between Biden, Warren and Sanders.

Vox Sentences: A huge victory for LGBTQ rights in India
2020 in 20 charts
The Trump administration says it must lock up families to keep them together. That’s not true.
Who got married in Love Is Blind’s volatile season finale?
How a star orbiting a supermassive black hole proves Einstein is (still) right about gravity
The 70% marginal tax rate is only the beginning of a fair system