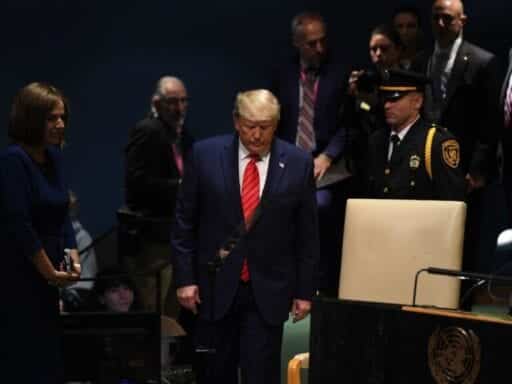 Trump ordered the aid held just ahead of a call with Ukraine’s president.

President Donald Trump reportedly asked his acting chief of staff Mick Mulvaney to ensure Ukraine did not receive the $391 million in military aid Congress had approved — at least one week ahead of the phone call he made to that country’s leaders that now sits at the center of a whistleblower’s complaint.

According to a report from the Washington Post Monday night, officials at the Office of Management and Budget (OMB) told the Pentagon and State Department in mid-July to freeze the aid over “concerns” that the money didn’t need to be spent.

The funds were finally released on September 11, but the timing of that request — not to mention Trump’s personal involvement — is drawing extra scrutiny as the whistleblower complaint roils Washington.

That complaint reportedly alleges Trump attempted to coerce Ukraine’s president to investigate a potential political rival, former Vice President Joe Biden, by threatening to withhold the funds unless an investigation was launched. This has led to concern among some lawmakers that the president may have used the power of his office to attempt to influence a foreign country to meddle in the 2020 election.

Trump has admitted to discussing Biden on the call but maintains he did nothing wrong and that he “had every right to” bring up the former vice president because “we don’t want a country that we’re giving massive aid to to be corrupting our system.”

But the Post’s reporting — corroborated later Monday night by the New York Times — casts further doubt on that reasoning and lends support to those concerned that the president hoped to create some kind of quid pro quo agreement in which Ukraine investigated Biden in exchange for the money.

Trump has denied this, telling reporters at the White House Sunday, “No quid pro quo, there was nothing.”

At a moment when leading Democrats like Sens. Elizabeth Warren and Kamala Harris are explicitly calling for impeachment, when senior House lawmakers like Rep. Adam Schiff who have been hesitant to support an impeachment inquiry are signaling they’ve changed their thinking, and when freshman lawmakers in swing districts are calling Trump’s alleged actions on the call an impeachable offense, the fact Trump asked his staff to postpone the aid just before his call would seem to add another piece of incriminating evidence to the timeline.

As scrutiny on the issue intensifies, it will be important for Trump to lay out clear reasons for why the money was withheld and to defend against claims he tried to use the aid as leverage should he want to avoid an impeachment inquiry. For now, it seems he is struggling to do so.

The military aid at the heart of Monday’s reports — and, possibly, the whistleblower’s complaint — was approved in the 2019 federal budget. It was meant to bolster Ukrainian forces in their ongoing conflict against Russian actors in the country’s east and included money for arms and radar systems as well as funding for naval forces and NATO aid.

Trump’s administration had initially told Congress it was releasing the aid to Ukraine on February 28. It told Congress again on May 23 that the aid would be released and has struggled to explain — both publicly and to the lawmakers who approved the aid — exactly why the funds were withheld. Trump has recently suggested corruption was a key factor in his decision but on Monday changed his mind, saying the reason was he wanted our allies to pitch in more money to support Ukraine: “I want other countries to put up money. I think it’s unfair we put up the money.”

But the Washington Post reports the president did not use either of those reasons with officials and lawmakers.

Mulvaney’s OMB told leaders at the State Department and Pentagon in July that Trump wanted the money held because he had “concerns” about the aid’s necessity. And those departments were instructed to inform members of Congress with questions about the delay that the money was coming but that its disbursement had been held up by “interagency process.”

Those questions did come, but congresspeople received little information. The money was finally released in September — according to Senate Republicans, it happened because Sen. Dick Durbin (D-IL) threatened to block $5 billion in Pentagon spending for 2020 if the aid wasn’t sent.

The day after the money was finally released, Senate Republicans said it had been held while the White House assessed whether the newly elected Ukrainian President Volodymyr Zelensky was aligned with the US and NATO or with Russia. That reasoning is particularly odd given the money was meant to be used to bolster Ukraine’s military in its current war against Russia.

Publicly, Ukraine has attempted to stay neutral, with Ukrainian Foreign Minister Vadym Prystaiko telling reporters the call “was long, friendly, and it touched on many questions, sometimes requiring serious answers.”

Zelensky himself came away from the July call with an understanding that the delay was over his stance on Russia, according to Sen. Chris Murphy (D-CT), who spoke with the president about the matter in September. Murphy told the Post the Ukrainian president “directly” said to him that he feared “the aid that was being cut off to Ukraine by the president was a consequence” of his refusal to launch a Biden investigation.

Still, Murphy said what Zelensky thought is less of an issue that what Trump did, per the Post:

“I don’t think it really matters . . . whether the president explicitly told the Ukrainians that they wouldn’t get their security aid if they didn’t interfere in the 2020 elections,” said Sen. Chris Murphy (D-Conn.). “There is an implicit threat in every demand that a United States president makes of a foreign power. . . . That foreign country knows that if they don’t do it, there are likely to be consequences.”

The exchange at the middle of Trump’s call with Zelensky centers on Joe Biden’s role in efforts to remove Ukraine’s top prosecutor, Viktor Shokin, in 2016. Trump and his allies have asserted — without any evidence — that Biden’s participation in Shokin’s ouster was itself corrupt and specifically that it was aimed at protecting his son Hunter.

At the time, Hunter Biden was on the board of a company, Burisma, whose owner was under investigation for corruption and money laundering. Shokin was believed to be hindering that investigation and anti-corruption investigation in Ukraine more broadly. This was frustrating the Ukrainian executive branch, the US, international finance officials, and some NATO allies — all of which had stakes in a corruption-free Ukraine, given the civil and military aid some were funneling to the country to help it fend off Russian aggression. So in 2016, Biden told the Ukrainian government that their loan guarantees would be cut off unless they removed Shokin. He told the story at a session at the Council on Foreign Relations in 2018.

But though Biden may have taken credit for it, this was hardly his unique idea. “Everyone in the Western community wanted Shokin sacked,” Anders Aslund, a senior fellow at the Atlantic Council, told the Wall Street Journal. “The whole G7, the IMF, the EBRD, everybody was united that Shokin must go, and the spokesman for this was Joe Biden.”

So despite his boast last year, Biden seem to have played a very minor role in Shokin’s firing. Within the Obama administration, the idea to remove him came from the US’s embassy in Ukraine, and the sentiment the prosecutor was hindering anti-corruption efforts was shared by the US’s partners and Ukrainian citizens.

Nevertheless, Trump maintains Biden personally had Shokin fired in order to protect Hunter from criminal liability. This does not make a lot of sense considering the removal of Shokin had the potential to hurt Hunter, given the US hoped to replace the prosecutor with someone more fully committed to pursuing an anti-corruption agenda.

Biden himself has called the accusation false and has said Trump concocted it to distract from the whistleblower investigation: “Trump’s doing this because he knows I’ll beat him like a drum,” Biden said Saturday. “And he’s using the abuse of power and every element of the presidency to try to do something to smear me.”

For the most part, Republicans have supported the president, and some have argued Biden does need to be looked into. Sen. Lindsey Graham told Fox News on Sunday, for instance, that there should be a domestic investigation into Biden.

“I’m calling for somebody in the Justice Department to look at all things Ukraine,” Graham said. “I’m hoping the Department of Justice will look at the Biden-Ukraine connection, like we looked at the Trump-Russia connection.”

“I believe it’s extremely important that their work be handled in a secure setting with adequate protections in a bipartisan fashion, and based on facts rather than leaks to the press,” McConnell said.

Democrats, particularly in the House of Representatives, are discussing whether to begin impeachment. Biden himself has only called for investigations, a call echoed by House Speaker Nancy Pelosi. But Pelosi is facing increasing pressure to move beyond investigations and into the impeachment process as even members of her caucus hesitant to come out in support of impeachment in the past, like Schiff or Rep. Rosa DeLauro, have begun to publicly signal they have changed their calculus on the issue.

Democrats plan to have an all-caucus meeting Tuesday evening at which impeachment will be discussed. But even should the party decide to take a more conservative approach and launch new investigations, the White House will need to answer for what seems to be an increasingly incriminating timeline. It will also face new questions about why its reasons for withholding the Ukrainian aid were first hidden and now keep changing.

The administration will have a chance to make its case more formally soon. Acting director of national intelligence, Joseph Maguire, will testify before the House Intelligence Committee on Thursday.

One day encapsulated everything that’s wrong with Fox News
House of the Dragon is the first Game of Thrones prequel that’s actually happening
Half of Republicans say increased racial diversity will be “mostly negative”
The 5 best TV shows of August 2019
“No matter what, there will be persistent doubts about how this process was carried out”
Exclusive: A new bill pushes Congress to do more to combat coronavirus racial disparities