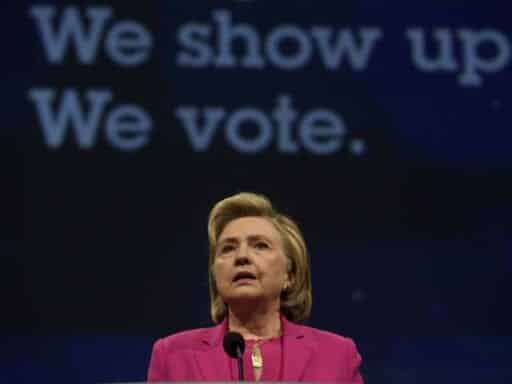 The former secretary of state painted a grim picture of America’s future under President Trump.

Hillary Clinton has a lot of thoughts about Donald Trump’s presidency so far. In an appearance this weekend in Pittsburgh, the former secretary of state and presidential candidate described the current administration as pushing a system of “organized cruelty” and warned Americans of the “grim” future that lay ahead if they don’t vote Republicans out of Congress in November.

Clinton’s remarks at the annual convention of the American Federation of Teachers, a national labor union, were among her harshest words yet about the Trump administration. Clinton has given few speeches since losing the presidential election in 2016, and she didn’t hold back her views of where America is heading under Trump. She drew a picture of an America that often resembled the fictional dystopia of Gilead in A Handmaid’s Tale.

“I used to worry that they wanted to turn back the clock to the 1950s. Now I worry they want to turn it back to the 1850s,” Clinton said to thousands of teachers who attended the convention, which included appearances by Sens. Elizabeth Warren (D-MA) and Bernie Sanders (I-VT).

“This nomination holds out the threat of devastating consequences for workers’ rights, civil rights, LGBT rights, women’s rights, including those to make our own health decisions,” Clinton said. “It is a blatant attempt by this administration to shift the balance of the Court for decades and to reverse decades of progress.”

Then she ripped into the administration’s practice of separating immigrant families at the border. “I find this beyond politics,” Clinton said. “The inhumanity of it, the disgrace, the indecency of it.”

Clinton didn’t spare any criticism for Republicans in Congress either. She denounced their efforts to repeal the Affordable Care Act and their tax cuts for corporations and wealthy Americans. She warned the audience that “the pressure and forces against progress are stronger than ever, they control our government and they are determined to have their way.”

The people in power are trying to rip out the heart of America, Clinton said. “They want to turn us against each other. They want to divide and conquer … a man-eat-man and woman-eat-woman society.”

Clinton even went as far as to compare America to 18th-century France on the verge of revolution, reading a few lines from Charles Dickens’s A Tale of Two Cities.

Clinton’s speech at the AFT convention follows months of turmoil facing teachers across the country. Public school teachers have rallied, gone on strike, and shut down schools in half-a-dozen states since February, demanding raises and more school funding.

The teachers unions have supported these efforts, but now they are facing another crisis: The Supreme Court’s ruling in Janus v AFSCME. The ruling, handed down in June, allows government workers in every state to opt out of paying agency fees to labor unions that represent them. The change will be a financial blow to teachers unions, such as the AFT, which represent large numbers of government workers.

At the convention, Clinton urged teachers to continue their rallies to boost funding for public education and to continue running for state and federal office. “We are in the midst of a struggle for our nation’s heart and soul,” Clinton said.

The former secretary of state gave her stinging critique of the current administration without ever uttering Trump’s name, or the name of any Republican in Congress. But her message was pretty clear: vote Republicans out of office in November.

“Then we can start holding people accountable,” Clinton said. “The alternative is too grim to think about.”

Warren and Sanders — two potential 2020 presidential candidates — echoed Clinton’s remarks during their own speeches at the conference, commending teachers for reviving the US labor movement.

“Across this country, educators are rising up, speaking out, and fighting for the future of this country,” Warren said. “People are no longer silent.”

One of the Democratic Party’s biggest donors is exploring a new anti-Trump boycott
9 questions about trans issues you were too embarrassed to ask
A tiny Amazon seller’s hand sanitizer went viral because of coronavirus. Then the trouble began.
High-ranking US cardinal resigns from Catholic Church amid sexual abuse allegations
8 great fitness apps for socially distant gym-goers
With “Kill This Love,” K-pop queens Blackpink have made YouTube and iTunes history