Hospitals are cutting staff just when America needs them most 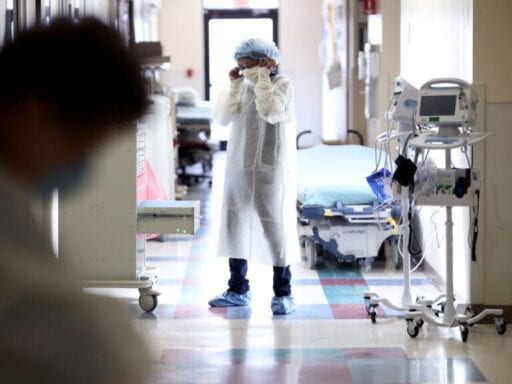 Share
Loading...
One nurse told Vox of being furloughed during the coronavirus pandemic: “You’re a hero, but also we don’t value you enough to prepare or pay you.” | Win McNamee/Getty Images

One nurse characterized the situation as: “You’re a hero, but also we don’t value you enough to prepare or pay you.”

The American health care workforce is being squeezed from two sides: by the coronavirus itself and a shortage of protective gear but also by the economic crisis, which is driving physician practices and now some hospitals to furlough or lay off staff at the very moment they are most needed.

My colleagues and I sounded the alarm about the first problem in this piece a couple of weeks ago. But the second is only beginning to fully reveal itself.

Altarum, a nonprofit research and consulting firm, reported last Friday that 43,000 health care workers had been laid off in the first month of the Covid-19 outbreak. That is a historical aberration: Health care has usually been cushioned from deep job cuts during economic crises, as this chart shows:

As you can see, there is nothing in the past 30 years that compares to the long red line on the right, representing those 43,000 lost jobs.

Most of the initial losses were in ambulatory services, according to Altarum: physician offices, dental practices, and other practitioners. Hospital staffing stayed mostly flat through the first month of the crisis.

But that is beginning to change already, with a slew of hospitals announcing furloughs or layoffs in recent days. Here is a collection of news reports I found, just by spending some time searching Google News:

I’m sure there are many more stories like these. But you get the idea.

Hospitals have typically said in these announcements that they are starting with nonmedical staff for furloughs and reduced hours, which is no solace to those workers but softens the impact on our medical capacity.

But it’s not clear how long medical systems can avoid cutting doctors and nurses as well, and some of them clearly cannot. I heard from a nurse in Texas, who asked that neither she nor her hospital be named for fear of professional repercussions, who has been furloughed because of the ongoing economic crisis.

She said how constrained she felt by the news. If she wanted to help with the coronavirus response by taking a job with a travel nursing service offering temporary postings in Covid-19 hot spots, for example, she would lose her old job and her health insurance.

”It really is frustrating to hear that you’re a hero but also we don’t value you enough to prepare or pay you,” she said. “I would be happy to temporarily relocate, work in a hot spot, and make the same wages as I normally would. I can’t afford to work for free, exactly, but it’s frustrating if I can’t work at all.”

Hospitals have taken huge revenue losses as they postpone elective surgeries and other routine care so they can make more staff and space available for the Covid-19 response. Some hospitals expect to lose half their income, and the top industry trade groups have warned that hundreds of hospitals could close after this crisis.

Congress pumped $100 billion into US hospitals as part of its first stimulus package, and Democratic leaders are already calling for another $100 billion in the next stimulus bill they hope Congress will pass.

But that may still not be enough, in the end. When one in four rural hospitals were already vulnerable to closure before the coronavirus struck, the current pandemic is almost certainly going to leave some hospitals with no choice but to close, no matter how much money the federal government provides.

”Even with all of that, there are going to be hospitals that close because of this,” Susan Dentzer, senior policy fellow at Duke University’s Margolis Center for Health Policy, told me recently.

Although today the need for increased health care capacity — for workers and facilities — is more apparent than ever, a grim future may await. And the fewer nurses and doctors we can keep employed in the meantime, the more difficult it will be to get the coronavirus under control in the first place.