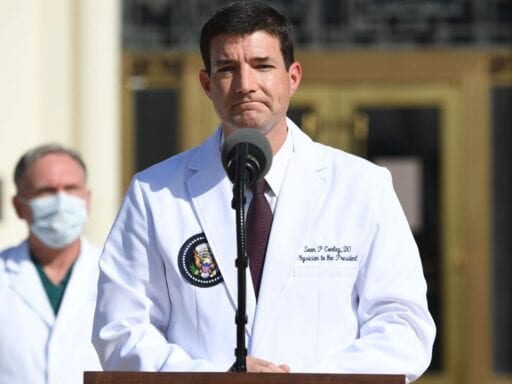 HIPAA protects every patient’s privacy, including Trump’s. But he seems to be using it for political advantage.

White House physician Sean Conley had a ready explanation on Monday for why he couldn’t share certain information about President Donald Trump’s Covid-19 case with reporters or the public: HIPAA.

Those five letters (typically pronounced hip-pah) stand for the Health Insurance Portability and Accountability Act, a 1996 federal law meant to protect medical patients’ privacy. When reporters asked the president’s attending physician whether chest scans had shown any damage to Trump’s lungs since he had contracted the coronavirus, Conley cited HIPAA to deflect the question.

“There are HIPAA rules and regulations that restrict me in sharing certain things for his safety and his own health and reasons” — Conley won’t talk about what Trump’s lung scans show pic.twitter.com/acsuFEWoUY

It may have felt opportunistic. After all, Conley had spent most of his press conference explaining in detail how much better Trump was feeling, how encouraged doctors were by his progress, and declaring that the president was “back.” Yet when faced with some uncomfortable questions, about Trump’s lung scans or when Trump last tested negative for the coronavirus, Conley hid behind HIPAA.

But the truth is HIPAA is meant to protect patients from having details of their health or medical care released without their permission. So while Conley may not have expressly said that Trump didn’t want his lung scans or test results disclosed, the president would have the power — as would any other patient — to prevent his doctor from sharing those details if he didn’t want them to become public, while allowing other details to be shared.

The White House physician just finished and is being hammered over his invocation of HIPAA to refuse to answer some questions. There is a contradiction in what information was revealed and what information was withheld. The only legal basis would not be HIPAA per se but…

… patient consent under HIPAA. President Trump can decline to have details of medical tests revealed. That can create this curious contradiction in the information being supplied.

…45 CFR §164.508 stipulates that all uses and disclosures of protected health information (PHI) require an authorization to be obtained from a patient before information prior to any disclosure. A patient can be selective in PHI disclosures.

Other health law experts I consulted agreed with Turley’s read on the law as it applies to Conley and Trump.

“Since Dr. Conley is one of Trump’s treating physicians, he’s covered by HIPAA,” Sharona Hoffman, a Case Western law professor who specializes in medical privacy, told me over email. “Consequently, he is obligated under HIPAA to withhold medical information that Trump doesn’t want released.”

HIPAA was passed at a time when medical records were starting to be digitized and so privacy was a paramount concern for the public and policymakers. And the law has served a real purpose in protecting patients, as Angela Chen wrote for The Verge in 2019:

In some cases, health information can lead to discrimination, such as higher life insurance premiums. In other situations, privacy itself is valued. You wouldn’t want a gossipy doctor or office secretary telling everyone which patient has cancer, and before HIPAA, that was far more common. “It’s hard to overstate the cultural change that HIPAA did bring about, and that’s been good,” says Margaret Riley, a health law expert at the University of Virginia.

But there is another way to think about how the law applies to Trump. Yes, it is true that Conley cannot share any of Trump’s medical information without the president’s permission. The law does allow for personal health details to be released, however, if the patient waives their HIPAA protections.

Trump could do that, if he wanted to. Whereas less famous patients might waive HIPAA so that information can be shared with their family or loved ones, the president could agree to a broader exemption that allows more details to be shared with the public at large.

In other words, the only reason Conley couldn’t tell reporters what Trump’s lung scans showed or the timeline for his test results is if Trump didn’t want him to. That’s his right as a patient. But it is bound to engender more distrust.

The White House has already been inconsistent at best in its description of the president’s condition, with what we do know of Trump’s care regiment suggesting a more serious case than the official prognosis. The vast majority of Americans — 69 percent — say they don’t trust the information coming from the White House about the president’s health, according to a new CNN poll.

There is a long history of White House officials being opaque about the president’s health or withholding worrisome medical information from the public. But at other times, they have been more forthcoming. For example, when President Bill Clinton required hearing aids or had a skin cancer lesion removed from his back, those details were disclosed by the official White House physician.

The Trump White House’s behavior in the middle of a pandemic that has now landed the president himself in the hospital therefore still feels different than prior situations.

“I think in the past, presidents have understood that details about their health are important to the public, so they have been much more transparent,” Hoffman said. “The complaint we are hearing is really about that, not about Dr. Conley’s conduct under HIPAA.”

Trump seems intent on insisting that his bout of Covid-19 — which has landed him in the hospital for four days, during which he was given experimental treatments and drugs usually reserved for patients with breathing problems — was no big deal.

“Don’t be afraid of Covid,” he tweeted on Monday. “Don’t let it dominate your life.”

The US has now tallied more than 7.4 million confirmed Covid-19 cases and more than 210,000 confirmed deaths. The country is currently averaging roughly 42,700 new cases and 700 reported deaths every day, eight months into the pandemic.

With Election Day less than a month away, Trump apparently feels downplaying the coronavirus threat is still his best reelection bet, despite his personal experience. It may not be a winning gambit, given polling that shows Americans think he’s acted irresponsibly and don’t approve of his administration’s handling of the pandemic.

But Trump, who admitted in private to hiding the true extent of the virus’s threat from the beginning, seems intent on sticking to that strategy to the end. His willingness to let his personal doctor talk about all the positive signs of his progress — but refusing to share any of the more potentially negative information — would be part of that playbook.

For better or worse, HIPAA does give him the ability to pick and choose which details the American public will hear about their president’s health. But remember: It’s his choice. Trump could, if he wanted to, provide his constituents with a more complete accounting of his health over the last week.

He’s just decided not to.