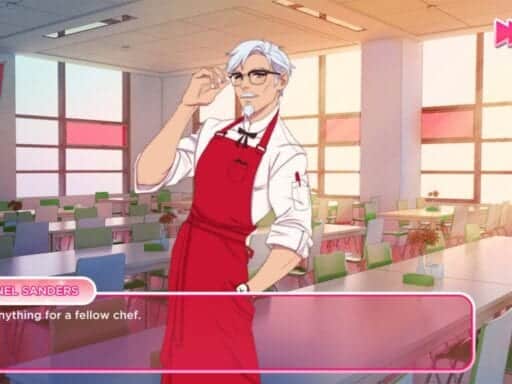 The game is a marketing stunt disguised as a fun romantic conquest.

America is engaged in a love affair with fried chicken. In August, our insatiable appetite for fried chicken (invigorated by the Popeyes versus Chick-fil-A controversy) created a chicken sandwich shortage: People stood in nearly hour-long lines, workers couldn’t afford to take breaks, and a Texas man even pulled a gun on a Popeyes cashier. To top off the fried chicken craze, KFC’s newly released dating simulator wants us to fall in love with Colonel Sanders.

Developed by Psyop and released on September 24, the game “I Love You Colonel Sanders!” is a clear marketing stunt disguised as a fun romantic conquest. (The tagline claims that it’s a “finger lickin’ good” dating sim.) The goal is to woo a very handsome and very buff Colonel Sanders, and I — and at least 4,000 other players — couldn’t resist the challenge.

I’ve always been intrigued by dating sims, how the gameplay process facilitates intimacy between a person and their digital partner. They’re games that are typically crafted in the form of a visual novel guided by a series of choices: Players can create their own adventures by selecting dialogue or physical actions from a list of options as the story progresses, which prompts certain reactions and responses from the virtual love interest.

The appeal of dating sims (unlike real-life dating) is that you’re expected to fall in love and relentlessly pursue the object of your affection. You date without emotional subtext and even if you mess up, you have the comfort of the restart button that’s a click away. I’d never extensively played a dating sim before, but the more time I spent on Tinder and Hinge this year, developing a romantic connection with a virtual character sounded appealing — especially when they’re unlikely to ghost me.

KFC promoted its game alongside a whimsical, anime-like introduction to its cast of characters, most of whom are unrelated to the fast-food chain. There’s the love interest (Colonel Sanders), best friend, rival chefs, and a culinary professor that’s a talking dog. The game — and by extension the brand — received plenty of interest for its outlandish, “can you believe it” premise prior to its release. This led me to wonder: Why did KFC venture into dating sims instead of opting for a cooking simulation game like Overcooked, where players prepared dishes in a restaurant? Why did the chain want players to pursue love with its mascot rather than directly interact with its menu items?

The simple answer is that brands like KFC are tiptoeing into gameplay to attract consumers — to make them invested in a game tangentially related to what they’re trying to sell. Revamping its mascot as an animated silver fox was a strategy “to make the Colonel a part of pop culture,” the company’s chief marketing officer, Andrea Zahuemsky, told the Wall Street Journal.

Colonel Sanders has always been KFC’s “north star,” and he has different personas for different audiences. For football season, he’s portraying Rudy, the star football player in a sports movie of the same name. The animated “hot Colonel,” as he’s dubbed by fans of the game, panders to gamers, fans of Japanese culture, and anyone looking for love, Zahuemsky told me in an email.

i went and did it
i downloaded the kfc dating sim and it’s?? not that bad?? just absurd??#iloveyoucolonelsanders pic.twitter.com/2Hg60XZEBN

“Colonel Sanders was the original celebrity chef and would stop at nothing to sell his world-famous fried chicken, so we always want our activations to tie back to his real-life persona,” Zahuemsky wrote. “So it made perfect sense that, even in a dating simulator that features a younger (available) Colonel, he is focused on his world-famous Kentucky Fried Chicken.”

As Jenny Zhang wrote for Eater, KFC has used video games as a vehicle for promotion before (it released an 8-bit game called Colonel Quest in 2015), but none has been as explicitly thirsty for its mascot. So in my pursuit to better understand KFC’s brand strategy, I decided to court Colonel Sanders.

I spent two hours at my kitchen table ruminating over the dialogue choices that would make Colonel Sanders fall in love with me. I have, in game-time, three “days” to do so, since the culinary school only offers three-day semesters. Your character is an aspiring chef, and on the first day, you find yourself attracted to the Colonel, a fellow culinary student.

“Even in a dating simulator that features a younger (available) Colonel, he is focused on his world-famous Kentucky Fried Chicken”

My character was drawn to the Colonel’s culinary expertise and winning looks. He bragged about using eleven herbs and spices to create his special fried chicken recipe, and after I pressed for more details, he divulged his special ingredient. Most of the conversation revolved around our shared passion of cooking as I tried to impress him with my culinary abilities in class. He praised my grandma’s mashed potatoes recipe and my scrumptious mac and cheese creation — both real-life KFC side dishes.

It’s impossible to play the game without constantly thinking about KFC, an undeniable success for the fast-food chain. My character was constantly overwhelmed by the sheer deliciousness of Colonel Sanders’s meals, which led me to think, am I supposed to be in love with the Colonel or the meals he serves up?

But as entertaining and easy as the gameplay is, our love story lacked substance — a major disappointment for me, a romantically parched soul. There were scenes that should foster intimacy (I slept over at his house and woke up to a biscuit breakfast), but as I’ve learned from previous dialogue suggestions, it’s easy to fall out of favor with the Colonel. (He got mad at me for wiping sauce from his mustache. Excuse me!)

The lack of romantic substance shouldn’t be surprising, as “I Love You Colonel Sanders!” is a branded dating sim, writes Nicole Carpenter for Polygon. And while the love story isn’t satisfying, by downloading the game itself I’ve already succumbed to the overarching power of KFC.

The fried chicken chain successfully infiltrated my mind, seizing control of my hunger-weakened thoughts and influencing every single one of my in-game dialogue choices. On the first day of class, for example, our canine professor quizzed us on “culinary basics,” which turned out to be a pop quiz on KFC’s brand history. Sprinkled throughout the gameplay were hints of the brand’s values: an emphasis on simple family recipes and small-town cooking.

The connection between chicken sales and game downloads has yet to be established, but KFC is undoubtedly attempting to connect intimately with customers and build brand goodwill. The game sought to familiarize me with KFC’s history and the Colonel’s values: Be your best self. Make a difference. Have fun. In a short two-hour span, I became familiar with his ambitions for his future fried-chicken establishment. I found myself naturally rooting for him, as a romantic partner should. And consequently, these thoughts influenced my perception of KFC.

According to Mario Natarelli, one of the authors of Brand Intimacy: A New Paradigm in Marketing, bonds between brands and consumers are vital to a long-term business strategy. Bonds should be reciprocal and fueled by emotion, he told Forbes. A 2019 brand intimacy study by marketing agency MBLM (which Natarelli is a partner of) ranked KFC within the top 10 fast-food companies with strong brand intimacy. The rankings rely on six archetypes, from nostalgia to identity, to analyze how companies develop an emotional connection with customers. KFC’s identity, which is enmeshed with Colonel Sanders, is its strength, the study found.

“I Love You Colonel Sanders!” didn’t satiate my fried chicken-oriented romance fantasy, but it’s undeniably a creative endeavor to modernize the old Colonel Sanders and build brand recognition. Still, my short-lived flirtation with the Colonel resulted in little more than a coupon offer to his restaurant, to which my character half-heartedly responded: “Gee … thanks.” It was the first time I’d been disappointed by a virtual man rather than an IRL one.

The House just passed its latest $3 trillion coronavirus stimulus package
Trump will reportedly name Chad Wolf as the new acting Homeland Security secretary
Biden announces veteran diplomat Linda Thomas-Greenfield as UN ambassador pick
Most cancer drugs fail in testing. This might be a big reason why.
The Supreme Court will hear a case that could destroy what remains of the Voting Rights Act
Vox Sentences: Emergency! Emergency!