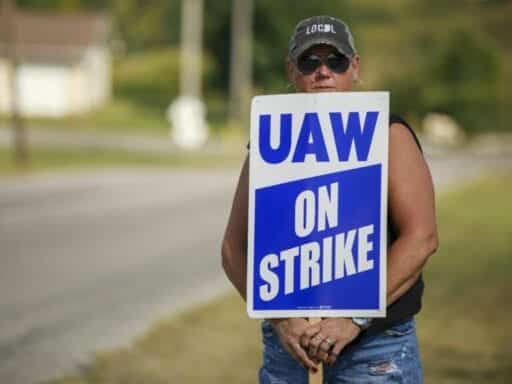 Sen. Bernie Sanders’ signature policy — Medicare-for-all — was once again under attack at an event with union workers Tuesday, when the news broke: General Motors cut off health benefits to nearly 50,000 workers currently on strike.

Former Vice President Joe Biden took the stage at a presidential forum with AFL-CIO union workers Tuesday, arguing that Medicare-for-all could be bad for unions.

“I have a significant health care plan. But guess what? Under mine, you can keep your health insurance you’ve bargained for if you like it,” Biden said. “If you don’t, you can move it, and you can buy into a public plan.” He continued to tell the workers, “You’ve broken your neck to get” their health care plans and “no plan should take it away from you if that’s what you decide.”

Biden is articulating an argument that’s been simmering in Democrats’ health care debate: the notion that moving every American to a single government-run health care plan could actually increase costs for union workers, who have negotiated generous benefits with little personal cost. Sanders, though, points to an argument on the left that the current system, reliant on employers, is unstable.

United Auto Workers at General Motors has long had what has been called the “gold standard” in union-negotiated health care plans — they pay little to nothing toward co-payments and deductibles; each employee covers roughly 3 percent of the cost. For comparison, the average worker pays 28 percent toward health care costs. It’s a benefit the union was able to largely keep intact through the auto industry crisis in 2009, and it has sacrificed wage and pension raises to maintain. This is the kind of health care plan Biden is talking about when he warns about Medicare-for-all.

This argument is playing out in real time. Thousands of GM employees are on strike this week in a bid for better wages and benefits and to address concerns for temporary workers. GM dealt its employees’ union, the United Auto Workers, an incredible blow on Tuesday; employees’ generous health care plan is being used as leverage to get workers to cross the picket line. GM has cut off health benefits to striking employees, shifting the cost to the workers — and in turn the union. UAW has offered striking members COBRA health care, which allows them to continue medical and prescription drugs coverage, but it doesn’t include dental, vision, hearing, and accident insurance.

GM had essentially spelled Sanders’s counterargument out for him. As employers use health care costs as a negotiation tactic, this kind of thing is bound to happen more. And for Sanders, it’s the perfect case for doing away with the current system.

The fight about Medicare-for-all and unions, explained

Their argument centered around the fact that Sanders’s Medicare-for-all bill does away with employer-sponsored insurance and puts every American on an expanded public health care system. Candidates like Biden point out that there are unions that have fought hard to secure generous health care packages from employers, and members shouldn’t have to switch from that.

Sanders says the cost of Medicare-for-all is that doing away with the cost of premiums, deductibles, and co-payments will outweigh increases in taxes. But Biden and the contingent of anti-Medicare-for-all candidates argue that may not be true for some union shops that have really strong health care benefits.

While not across the board, it’s true that collectively bargained health care plans are generally more generous than non-union employer-based plans; union employees on average pay less toward premiums, have lower deductibles, and typically have generous benefits, a study in Health Affairs of 2013 health plans found.

Sanders has long argued that if unions didn’t have to spend all their political will fighting for health benefits, they would have more room to win higher wages and benefits. But while there is a wealth of research indicating increased health care costs bring down wage growth, there’s less evidence that companies engage in the trade-off the other way. As Sarah Kliff reported, “there are no studies that show the reverse relationship — wages rising when premiums grow slower — but experts in labor economics believe this relationship exists.”

That said, Sanders campaign acknowledged these concerns in its labor plan, stating that if Medicare-for-all were signed into law, he would mandate companies with union-negotiated health plans enter contract negotiations under the National Labor Relations Board. The Sanders campaign says this would be enforced through a rule implemented by the NLRB as well as by legislation.

“Under this plan, all company savings that result from reduced health care contributions from Medicare-for-all will accrue equitably to workers in the form of increased wages or other benefits,” the plan reads, adding that the unions will continue to be able to negotiate any coverage that’s not duplicative of the benefits under Medicare-for-all. Sanders’s Medicare-for-All bill proposes expanding current Medicare coverage to also include dental, vision, and hearing.

The GM strike, however, emphasizes another of Sanders’ argument for government-run health care: union shop, or not, employer-based health care isn’t stable.

Companies use health care as leverage to negotiate down wage increases and other benefits. That’s why some of the biggest unions in the country support Medicare-for-all — or at least moving in that direction.

A note to anyone who wants to use union members as a wedge to oppose #MedicareForAll: @UAW has one of the best plans in the country, but management can still use it to hold workers hostage. #M4A puts power back in our hands. #1u https://t.co/Wsro6dOmlf

American Federation of Teachers President Randi Weingarten noted that AFT is supportive of Medicare-for-all and other universal health care plans. “Any plan that provides more people with the care they need and gets us one step closer to affordable coverage is a step in the right direction,” she said.

And Mary Kay Henry, the president of Service Employees International Union, one of the largest and most influential unions in North America, told Vox’s Alexia Fernandez Campbell that “no elected official should accept incrementalism.”

“American taxpayers are subsidizing multimillion-dollar companies that are making record profits but are not providing decent jobs for people,” Henry said. “You can’t nibble around the edges. All these bold solutions are not radical.”

Sara Nelson, president of the Association of Flight Attendants, who has previously called the notion that Medicare-for-all would be bad for unions a “great failure of understanding how unions work.” She also called the suggestion “offensive to me” in an August interview, pointing out that GM is making the case for Medicare-for-all.

A note to anyone who wants to use union members as a wedge to oppose #MedicareForAll: @UAW has one of the best plans in the country, but management can still use it to hold workers hostage. #M4A puts power back in our hands. #1u https://t.co/Wsro6dOmlf

United Auto Workers, has “one of the best plans in the country,” she writes, “but management can still use it to hold workers hostage.”