How to survive quarantine with these 215 songs 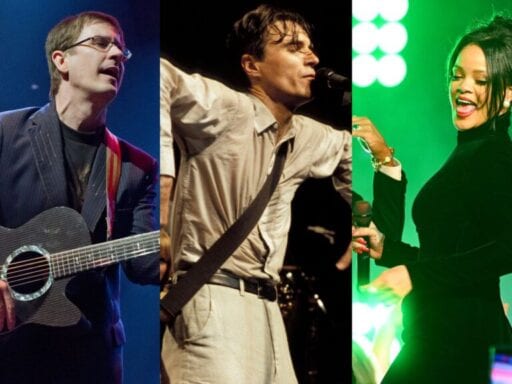 Share
Loading...
This playlist includes music from the Mountain Goats, Talking Heads, and Rihanna. All at once! (Okay, not all at once.) | Barney Britton/Redferns; Richard E. Aaron/Redferns; Dave Kotinsky/Getty Images for Diamond Ball

The ultimate quarantine playlist lasts just over 16 hours and features everybody from the Beatles to Frank Ocean.

Late last week, I issued a challenge to my Twitter followers, friends, and colleagues across various Slacks, social networks, and email chains: Give me the one song that would be on your perfect quarantine playlist.

The results that came in were incredibly varied and interesting, and I started collecting them into a Spotify playlist. By the time I was done, I had 215 songs that ranged all over the place, from classical music to modern hip-hop, from New Wave bangers to pop star excess.

Naturally, I had to share this with the world. And that’s just what I did.

Lasting a little over 16 hours, “Quarantine: A Playlist” has been sequenced (by me) to flow easily from one song to the next, so you can listen to it either shuffled or in order. (I prefer to listen to it in order, but then I would, as it is my artistic expression being realized.)

A note: If a recommended song was on Spotify, I put it on the list, including some songs with explicit language (though of the “four-letter words” variety, nothing more) and a couple of songs over 20 minutes long. For the former, Spotify lets you avoid explicit content by flipping a switch in the preferences menu, so if you have kids around or just don’t want to listen to songs with some four-letter words in them, you may want to switch that on. For the latter, why wouldn’t you want to listen to a half-hour-long piece of noise pop??

(Another note: A handful of songs recommended to me were not on Spotify, which is too bad. Some of those songs are great.)

Common themes crop up across the included tracks. There are a lot of songs about isolation and several about disease or sickness. There are songs filled with despair for what might be coming, but then just as many songs filled with optimism and hope that we might get through this after all. Working on the playlist exposed me to so much music I hadn’t heard of and led me to revisit some old favorites, too. This playlist project was honestly one of the things I’ve felt most sustained by during this quarantine.

Some stats! The most nominated artist was the Mountain Goats, who have four songs on the list, though if you give John Lennon credit for both the songs he performed with the Beatles and as a solo act, he has five songs on the list. The most nominated song period was the Mountain Goats’ “This Year” (“I am gonna make it through this year / if it kills me”), which was named by nearly a dozen people and closes out the playlist because, for as many times as I’ve heard it over the years, it never gets old.

The most recent song on the list is Dua Lipa’s “Physical,” which came out only a handful of days ago. The oldest song on the list is French romantic composer Camille Saint-Saëns’s “Danse Macabre,” which was written in 1874. So, yeah, there’s a wide breadth of stuff available here.

Hopefully you enjoy this playlist as much as I do. And if nothing else, I hope you appreciate how amazing it is when “The Book” from Alexandre Desplat’s score for Greta Gerwig’s Little Women rolls over into Jessie J, Ariana Grande, and Nicki Minaj’s “Bang Bang.” (Pretty amazing.) Enjoy, stay safe, and listen responsibly.

(PS: If you just want to read the original Twitter thread that led to this whole monstrosity/masterpiece, I’ve embedded the first tweet below. Naturally, suggestions that came in to me via email and other private spaces are not in the thread.)

What’s on your perfect quarantine playlist?

The pro-Trump inauguration protests at state capitols were complete duds