How Trump’s speech led to the Capitol riot 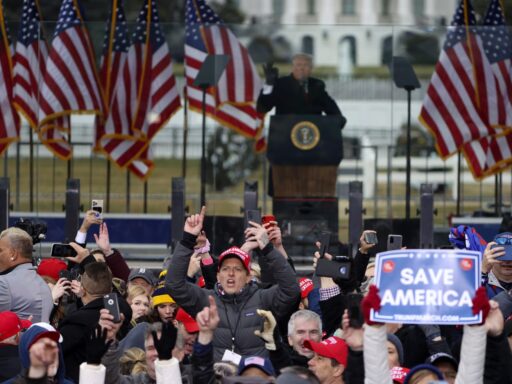 “We’re going to have to fight much harder.”

Just before a mob of his supporters descended on the US Capitol on Wednesday and caused a riot that killed five people, including a Capitol police officer who was beaten to death, President Donald Trump delivered a speech to them in which he used the words “fight” or “fighting” at least 20 times.

“We’re going to have to fight much harder and Mike Pence is going to have to come through for us,” Trump said at one point, alluding to Pence’s ultimate refusal to attempt to steal for the election for him during that day’s hearing where the Electoral College made his loss official.

“You’ll never take back our country with weakness. You have to show strength. You have to be strong,” he added at another, during a speech in which he pushed long-debunked lies about Joe Biden’s convincing victory over him being the product of fraud.

Trump’s comments at the rally are worth reexamining two days later, as he’s condemned by people across the political spectrum for inciting an afternoon of violence that forced lawmakers into hiding, left journalists at the mercy of a violent mob, and directly endangered the safety of Pence and other lawmakers perceived as betraying Trump or being anti-Trump.

I heard at least 3 different rioters at the Capitol say that they hoped to find Vice President Mike Pence and execute him by hanging him from a Capitol Hill tree as a traitor. It was a common line being repeated. Many more were just talking about how the VP should be executed. https://t.co/fxHREouEWF

Instead of being appalled by what was unfolding at the Capitol, Sen. Ben Sasse (R-NE) said on Friday that White House aides told him Trump was actually “delighted.” The president’s role in the mayhem was so egregious that it’s put him under enormous pressure to resign or be forced from office via the 25th Amendment or a second impeachment, even while there’s only 13 days left in his term.

Trump’s speech was the last in a series delivered at a “Save America” rally in which Republicans who had vowed to follow the Constitution by resisting the pressure campaign to steal the election were repeatedly portrayed as wimps or traitors.

Rep. Mo Brooks (R-AL) began the day by angrily yelling, “Today is the day American patriots start taking down names and kicking ass!” Donald Trump Jr. followed that up by warning Republicans in Congress that if they didn’t “fight” for his father later that day, “I’m gonna be in your backyard in a couple of months.”

“You don’t concede when there’s theft involved,” he said. “Our country has had enough. We will not take it anymore and that’s what this is all about.”

Trump encouraged his listeners to march to the Capitol following his speech “to see whether or not we have great and courageous leaders or whether or not we have leaders that should be ashamed of themselves throughout history, throughout eternity.” He did mention in passion that he was confident they would march “peacefully,” but his fans seemed to hear a different message, at one point chanting “fight for Trump!” as Trump said “we will not let them silence your voices. We’re not going to let it happen.”

This is the incitement earlier today that led to the violent insurrection against the government of the United States. https://t.co/wiCp0gLo1G

Indeed, shortly after Trump’s speech wrapped up, a mob of Trump supporters overran law enforcement officials and breached the Capitol, ransacking and looting and leaving the premises looking like a war zone. They succeeded in disrupting and delaying the proceedings that made Trump’s loss official, but didn’t change the ultimate outcome — and if anything did damage to Trump by turning political sentiment sharply against him in the final days of his administration.

As chaotic scenes unfolded at the Capitol, Trump’s first move was to post a tweet attacking Pence for lacking the “courage” to help him steal the election (he later deleted it as a condition of getting Twitter to unlock his account). Meanwhile, rioters unsuccessfully hunted for Pence, while others were photographed with zip tie handcuffs suggesting they hoped to take hostages.

The power of audio: Just minutes after Trump slammed Pence on Twitter, @sheeraf tells @mikiebarb that “on a livestream of someone inside the Capitol, you hear dozens of people shouting, ‘Where is Pence? Find Pence!’ ” and also “Fight for Trump!”https://t.co/Lg0SUhE57K

Only later did Trump call for peace, but even then he did so in the context of a video message in which he praised his supporters, telling them that while “you have to go home now … we love you, you’re very special.” Information that has since emerged is raising questions about if Trump may even have played a role in kneecapping law enforcement services that failed to prevent rioters from breaching the Capitol.

Rioters, looters, and those who engaged in deadly violence are of course responsible for their own actions, but Trump and other speakers at the “Save America” rally contributed to the chaos by whipping them into an unruly frenzy and encouraging them to do what they could to help him overthrow the election. Wednesday’s chain of events will go down as one of the clearest examples of Trump’s reckless rhetoric radicalizing his followers and ultimately jeopardizing victims.