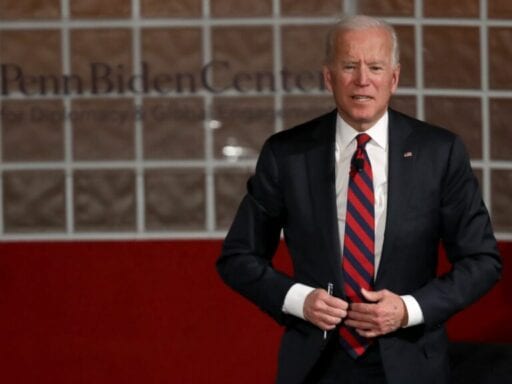 Workplace conduct standards are no longer just about illegal behavior, but also what makes others uncomfortable.

Human resources experts say that if former Vice President Joe Biden were facing the same complaints at work that he’s dealing with in politics, he’d probably require a conversation with management.

Biden’s habit of touching, embracing, and otherwise interacting in questionable ways with women in public has been on display for years at political events. Biden, who is mulling a presidential run, is suddenly dealing with the issue because two women recently came forward to say his behavior, long joked about, made them uncomfortable.

Biden has said that he has offered “countless handshakes, hugs, expressions of affection, support, and comfort” over the years and never believed he acted inappropriately. “If it is suggested I did so, I will listen respectfully. But it was never my intention,” he said.

The accusations have led to a debate over whether Biden’s conduct is okay or not, revealing that there’s no agreed-upon standard for such cases, particularly with behavior that’s not criminal.

Political campaigns don’t take place in a traditional office — as Lucy Flores explained in her personal essay describing an encounter with Biden at a 2014 Nevada rally, where she says he sniffed her hair. There is no HR department to contact for someone in a situation like the one Flores described.

But what if there was?

I spoke with four human resources experts and consultants and asked how behavior like Biden’s — both as described by these women and as exhibited in many public events — would be treated in a traditional workplace. Experts say that while the type of behavior Biden has engaged in would probably not add up to a lawsuit for a company, it’s the type of thing you want to head off as soon as you see it. Especially as the consensus about what sorts of actions corporations are supposed to police among employees evolves.

“Even if it’s not illegal, if it makes someone uncomfortable, it’s going to affect their ability to do their job, and ultimately, that’s what HR cares about,” Rita Risser Chai, a former Silicon Valley attorney with expertise in sexual harassment and workplace training.

Companies used to just focus on what’s illegal. That’s not the case anymore.

For a long time, HR departments focused on illegal behavior, rather than what’s appropriate in terms of interpersonal relations, harassment, or potential discrimination in the workplace. That largely translated to looking for instances of quid pro quo harassment — for example, a superior soliciting sexual favors in exchange for a promotion or work benefit — or of creating a hostile work environment — basically, when the harassment or discrimination becomes pervasive.

But that’s starting to change. Companies aren’t just focused on whether they might be sued, but they’re also looking increasingly at the grey areas of interactions between employees.

“What’s interesting here is really the way this is shifting in light of the #MeToo movement,” Ally Coll, cofounder of the campaign HR consulting firm Bright Compass, told me. “Now I think that a lot of employers are starting to train people and put in place policies that do address these smaller incidents and clarify some of the grey areas around what is appropriate and inappropriate on an individual level without necessarily needing to rise to the point where the company would be at risk of a lawsuit.”

In 2016, the US Equal Employment Opportunity Commission’s Select Task Force on the Study of Harassment in the Workplace released a report that found, among other things, that harassment training has been too focused on avoiding legal liability and that much of the legal-focused training enacted over the past 30 years has not worked as preventative tool to curb harassment or encourage reporting.

“It’s essential, of course, for employees to understand the legal parameters of sexual harassment, and any anti-harassment training needs to cover that,” Robyn Swirling, the founder of Works in Progress, an organization focused on gender and sexual harassment in progressive spaces, told me in an email. “But trainings should also go into detail on how and why behaviors like Biden’s would be damaging in a workplace: What does it feel like for someone to be touched without their consent in that way?”

You just have to ask

There’s no one-size-fits-all solution for every workplace, but among the experts I spoke with, they generally agreed that with physical contact, it’s always better to ask first. Is it the end of the world to hug a coworker? No. But you have to really be sure your coworker is okay with it.

“Training needs to include such things as respect and civility and recognizing that includes, really, you don’t touch people unless you ask them,” Susan Strauss, a harassment and bullying consultant based in Minnesota, said. “It’s just a boundary issue.”

Coll said the issue of hugging comes up a lot — the types of embraces Biden is known for. “The key question is: Does the other person want to be hugged? Do they want to be touched? Are they okay with that? And if you are not sure, you should ask,” she said.

Stephanie Carter, the wife of former Defense Secretary Ash Carter, in a Medium post published over the weekend explained that the image that is often shared of Biden holding her shoulders and whispering to her that is often cited as an example of him being inappropriate was taken out of context. It was a “longer moment between close friends,” she wrote, and welcome. In other words, in that instance, Biden was fine.

The type of interaction Flores mentions is, however, more questionable, in a workplace scenario or wherever. She said it made her uncomfortable, and that’s what matters. Moreover, there are also gender and power dynamics in play. (Biden was vice president when it happened.)

“People in positions of power may or may not … forget that by the mere fact that they’re in a position of power they need to me more cognizant of their behaviors, touch, in particular, and what they say,” Strauss said.

“Biden’s behavior is very clearly gendered — he engages in this kind of physical conduct only with women — and, whatever his intent, is experienced by many as being sexual in nature,” Swirling said. She also laid out questions any training would need to dig into in behaviors such as this:

What does it feel like for someone to be touched without their consent in that way? What strategies might they undertake to avoid a person who engages in conduct like that, and how does that affect their day to day life? What can someone actually do when they experience or witness misconduct, whether that’s speaking up as a bystander or reporting it to HR?

To be sure, not everyone views Biden’s behavior through the same lens. Some people see it as affectionate, while others see it as creepy. And not everyone has experienced his behavior in the same way, either. Moreover, this is nowhere near the level of what, say, Harvey Weinstein or Matt Lauer have been accused of.

In corporate America, this is the type of thing management would at the very least want to get out in front of before it gets out of hand. In the current political landscape with regard to Biden, it’s been out in the open for years, and for various reasons, it’s now getting more scrutiny than it has previously. Even if he did not mean for it to be inappropriate, if it made other people uncomfortable, that’s what matters and should be remedied, experts say.