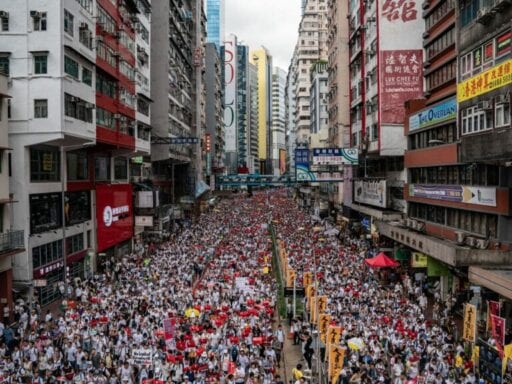 A new bill would allow for extradition to China. At least 240,000 (and maybe as many as 1.03 million) people marched in protest.

Hundreds of thousands of people — perhaps even more than 1 million — took to the streets of Hong Kong on Sunday to protest a government bill that would open the door to criminal extraditions to mainland China.

According to organizers, a total of 1.03 million people took part in the protests; if accurate, that would mean roughly one-seventh of the total population of the autonomous city-state took to the streets. A police spokesperson told Reuters that 240,000 were present at the “peak.”

Time lapse video shared online on how hundreds of thousands marched to protest against an extradition bill #extraditionbill in Hong Kong pic.twitter.com/hOps5KF5VC

Organizers said the turnout was the largest since the successful protest against a 2003 plan to amend national security law — 500,000 people attended that rally.

The crowd of protesters was diverse, and reflected the varied interests aligned against the extradition bill; it reportedly included teachers, businesspeople, drivers, students, and even young children.

“This law is dangerous, and not just for activists,” protester Lee Kin-long told the New York Times. “We are not activists. Even as regular citizens, we can’t stand to see China eroding away our freedom.”

Martin Lee, an activist who helped create Hong Kong’s Democratic Party told the Wall Street Journal, “This is the last fight for Hong Kong. The proposal is the most dangerous threat to our freedoms and way of life since the handover.”

College student Karen Chan told the Hong Kong Free Press she wasn’t sure the protests would make a difference, but felt she had to try: “I know it’s difficult to change the mind of the Hong Kong government, but I hope that the protest today can arouse some international concern about it through the power of mass media.”

The protesters carried signs calling for the resignation of Carrie Lam, the city’s chief executive who has advocated for the extradition bill, and wore white, to symbolize “light” and “justice.” Some also carried umbrellas, which became a symbol of the Hong Kong’s pro-democracy movement during 2014 protests.

While the march was mostly peaceful, the BBC reports that pepper spray has been used against some protesters. Just before Monday morning, some violence appeared to erupt near the city’s Legislative Council. Radio Television Hong Kong and the Hong Kong Free Press report that police used pepper spray and batons against protesters gathered near the legislative area. Protesters reportedly struck back by using metal barricades against officers and by throwing bottles. Students are said to have urged the protesters to leave the area as the police set up barriers and called in reinforcements. The midnight Legislative Council protest began as a peaceful sit in.

Physical altercations as police pull a demonstrator to the ground after crowds begin to remove metal barriers surrounding the LegCo complex. pic.twitter.com/wVX7bmS0zS

Hong Kong was once a British colony; following 150 years of British rule, the United Kingdom handed off control to the People’s Republic of China in 1997. Until 2047, Hong Kong is supposed to be able to govern itself under a policy known as “one country, two systems,” meaning the while Hong Kong is under Chinese sovereignty, it is supposed to be able to retain its own political and legal systems.

As Vox’s Alex Ward reports, the Chinese government has worked to limit Hong Kong’s independence: “At China’s direction, the Hong Kong government in recent years has quashed the city’s democratic movement, blocked opposition candidates from running for elected office, and put down nearly all protest movements.”

The pressure Beijing has placed on Hong Kong’s leaders to pass new extradition legislation is the latest development in this ongoing trend.

The legislation, sponsored by Hong Kong’s current pro-Beijing government, would empower officials to decide, on a case-by-case basis, whether to extradite wanted criminal suspects to stand trial in China itself. The bill would also require Hong Kong to extradite suspects to jurisdictions it lacks extraditions agreements with.

Government officials have promised the new law would not be used against people facing religious or political persecution, but Hongkongers fear China will not abide by that promise. They also worry citizens will suffer from arbitrary detention and point to allegations Chinese officials use enhanced interrogation techniques as a reason for caution. Businesspeople further fear that should the proposal become law, foreign interest in investment in Hong Kong will cool, and that some companies may even be forced to leave.

The Hong Kong government has partially answered these concerns by raising the threshold for potential extradition to crimes that carry penalties of seven years imprisonment or more, and has said anyone facing the death penalty would not be extradited.

Officials have also said extradition cases must first go through independent local judges, and then finally face approval by Hong Kong’s own chief executive. “We continue to listen to a wide cross-section of views and opinions and remain to open to suggestions on ways to improve the new regime,” a government official said.

In a separate statement, a government spokesperson said despite the protest, the bill will continue its path to becoming law on Wednesday, and said “most of those earlier concerns” expressed by protesters had been satisfied by the amendments made to the bill.

Why the alt-right loves ancient Rome
Russians reportedly hack Burisma, the Ukrainian gas company tied to Hunter Biden
Why baby boomers need immigrants to fund their retirement, in 2 charts
“That awful day could have been so much worse”: New videos show how narrowly rioters missed lawmaker...
Sunday’s virtual Sondheim concert was the most cathartic experience of quarantine so far
US officials say their pressure on Iran is working — and that’s why tensions are getting worse