I listened to the Supreme Court argue about my rights as a trans person. I have never felt more frustrated. 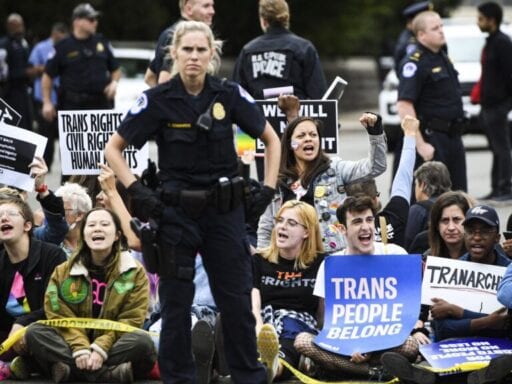 There was a lot of talk about bathrooms during cases about work discrimination.

At an early point in Tuesday’s Supreme Court oral arguments, I realized I had to pee. This was despite having just ducked into the ladies’ room to relieve myself before reporters were called into the press gallery. Maybe it was the large latte I drank on my walk to court. Maybe it was my anxiety, which was rolling through my gut as I prepared to listen to people argue over my civil rights as a trans person.

This, it turned out, was fitting. As soon as the first two of three cases over LGBTQ employment rights under Title VII of the 1964 Civil Rights Act got underway, it was clear to me that what was really on the justices’ minds was also what was on mine: my bathroom usage. The first hour of arguments were over two cases in which gay men had allegedly been fired for being gay, and though neither case had anything to do with gender identity, that didn’t stop even liberal justices Sonia Sotomayor and Ruth Bader Ginsburg from bringing up the most obsessed-over of all trans issues — bathrooms and who gets to use the ones labeled “women” and who gets to use the ones labeled “men,” an argument often led by conservatives.

The “big issue right now raging the country is bathroom usage. Same-sex bathroom usage,” Sotomayor said. According to the official transcript, the word bathroom was uttered nearly 20 times during arguments for a case that, again, had to do with work discrimination based on sexual orientation. The bathroom talk continued into the third case, which was at least about trans rights — but it was about the right to work free of discrimination as a trans person, not about where we pee.

While I get that Sotomayor knew bathrooms were bound to come up and perhaps wanted to beat everyone to the punch, this “raging” issue she described has long been dominated by conservative furor over “men in women’s bathrooms.” It was frustrating to hear cisgender justices argue about bathrooms and religious exemptions when what was at stake was my right to earn a living. The consequences of their decision could affect not just my livelihood but millions of people in the LGBTQ community.

The US trans community had been watching the trans rights case before SCOTUS, R.G. & G.R. Harris Funeral Homes v. EEOC, roll through the justice system for quite some time — and doing so with an imminent sense of dread. According to a 2015 National Center for Transgender Equality survey, 30 percent of all trans people have experienced discrimination in the workplace for being trans. Lack of employment opportunities has led to increased levels of poverty within the trans community and made access to gender-affirming health care more difficult. These numbers could get much better, or much worse, based on the justices’ decision.

On Monday, I spoke with Aimee Stephens, the trans woman at the center of the case who was fired from her job as a funeral director and embalmer almost immediately after coming out to her employer, and came away impressed with her cool optimism. But I’ve still been quite anxious about the outcome. Not this court, not with these five conservative justices, I thought. Trans people don’t ever get breaks in these situations.

In fact, trans and nonbinary people outside the courthouse also shared my doubts and apprehension. “If my normal level anxiety is around seven, I was feeling like an 11 today. I’m very nervous,” trans woman Jayde Coler, a 30-year-old George Washington University law student, told me.

Bre Kidman, the first nonbinary Senate candidate in US history and a Democrat in Maine’s Democratic primary, was also nervous. “I just had this feeling that it was going to be an instant smackdown of LGBTQ rights,” they told me.

My anxiety levels didn’t get any better as I listened to oral arguments in the Stephens case. I found myself at once frustrated and relieved by my obstructed view of the proceedings in the back section of the press gallery, thankful to be hidden while my most personal bodily functions, again, were discussed by nine of the most powerful people in the country.

The very first succession of questions, from Chief Justice John Roberts, was about bathrooms and dress codes. “In other words, if the objection of a transgender man transitioning to [a] woman is that he should be allowed to use, he or she, should be allowed to use the women’s bathroom, now, how do you analyze that?” he asked immediately.

My bladder let out a little yelp. Roberts’s unclear statement about a “transgender man transitioning to woman” is ostensibly referring to a trans woman. But the way he, and several other justices, phrased things made any argument confusing, especially in the context of whether a trans person is simply allowed to do their job.

This was followed by Justice Samuel Alito, who asked about trans women playing women’s sports and whether it would be a violation of Title IX. While I get that courts often look to how one anti-discrimination statute is interpreted when reading another, this case was about Title VII, which is about employment discrimination “because of sex.”

Alliance Defending Freedom attorney John Bursch, representing Stephens’ former employer, Harris Funeral Homes, brought up women’s shelters, completing the transphobe triumvirate. I couldn’t help rolling my eyes. What does any of this have to do with whether it’s legal to fire trans people just for being trans?

ACLU attorney David Cole, attorney for Stephens, made one of the most compelling arguments. He said that if you took the Price Waterhouse case, which deemed sex stereotyping illegal under Title VII, and the only fact you changed was making the plaintiff Ann Hopkins a transgender man, instead of cisgender woman, who refused to fit feminine stereotypes, you couldn’t possibly reach a different decision than the one the previous court reached in her case. It’s such a simple argument: You cannot discriminate against transgender people without imposing sex-based stereotypes based on how you expect people born male and female to present themselves and behave.

But probably most intriguing point was from Justice Gorsuch, who seemed to agree that through a textualist lens (which means, according to the literal written text of Title VII), Stephens had an obvious claim under the law on the basis of sex stereotyping. “I’m with you on the textual evidence,” he said, referring to the Stephens case. “It’s close, okay?”

Gorsuch, however, did have concerns, pondering whether a ruling in favor of Stephens would result in “massive social upheaval” with changing bathroom and dress code norms in workplaces. He went on to suggest that trans employment protections might be better left to Congress. “It’s a question of judicial modesty,” he said.

At that point I looked down, taking stock of the plaid dress I was wearing under a black women’s blazer and sensible, if too-small flats. “What social upheaval?” I wondered. Did my presence in the courtroom or the presence of dozens of other trans people, attorneys, and public gallery attendees in the courtroom Tuesday wearing clothes associated with their gender identity cause any upheaval?

I’m not a lawyer, but as a lay person and as a trans woman, I couldn’t get over the ridiculousness of the whole thing. Arguments for the case were kept to an hour — an hour to argue over the lives of nearly every trans person alive today. And what was the discussion about? Not the inherent right for an American to fairly make a living, not about the harms visited on a marginalized community by decades of discrimination. But instead, where we pee.

There’s the rub: Those who have never met a trans person before may think of us as new or exotic; maybe some are only familiar with us from porn, a literal fantasy. But we’re all just regular people — reporters, attorneys, funeral home directors. We don’t, on the whole, when around others, leave horror in our wake. And if people do react with revulsion toward us, that’s not our fault, nor is it a reason to legally exclude us from regular social activities and financial necessities like having a job. That’s why the Civil Rights Act of 1964 was passed in the first place — to remove sex as a determining factor in employment decisions. And trans people have a sex just as anyone else does.

Once the day’s proceedings concluded, we filed out of the gallery. I couldn’t hold it any longer and made a beeline for the ladies room. I did my business, wiped, washed my hands, and left, keeping my head down, knowing that there were likely women who opposed my presence in that bathroom waiting in line. I was in and out in two minutes. I had to get back to work.

As far as I know, civil society is still standing. No social upheaval was to be found.

Proof that Americans are lying about their sexual desires
Why the death of a 7-year-old black girl became a national story about race and violence
For years, brands have been pushing an at-home lifestyle. No one expected it to happen like this.
Here’s what the National Guard can and can’t do during the George Floyd uprising
The Nevada caucus tool is an iPad and a Google Form
YouTube has a pedophilia problem, and its advertisers are jumping ship