In a futile gesture, the majority of House Republicans voted to reject Arizona’s Electoral College votes 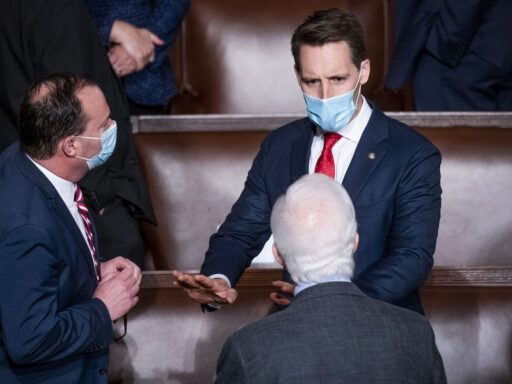 After a day of insurrection, 57 percent of House Republicans continue to promote debunked theories of election fraud.

A pro-Trump mob fueled by conspiracy theories stormed the Capitol Wednesday, leaving one woman dead and a nation rattled. Yet, mere hours later, the majority of House Republicans chose to feed into the same debunked ideas that fueled this insurrection by opting to reject Arizona’s electoral votes.

These votes had no material effect on the transition of power. Congress is meeting in a joint session to fulfill its legal obligation to count the Electoral College’s votes, but given that Democrats hold a majority in the House and most Senate Republicans were unwilling to object, there was no path forward, and the vote failed. A majority of both chambers have to reject a state’s votes for an objection to stick.

However, after a day of violent insurrection, it has become too clear just how dangerous it can be to feed into anti-democratic delusions.

Ever since Alabama Rep. Mo Brooks announced his intention to object in early December, the idea gained steam among the Republican caucus; at one point, as many as 14 Republican senators, led by Sens. Josh Hawley (MO) and Ted Cruz (TX), had signed on to object as well.

The objecting members point to baseless allegations of voting irregularities as well as claims that large proportions of their constituents believe the election was stolen as the basis for their stance. However, these Republicans have ignored their own role in fomenting conspiracy theories around the election. Their concerns also fail to account for the overwhelming evidence that there was no widespread voter fraud.

President Donald Trump and prominent Republicans’ focus on the normally mundane counting of the votes turned January 6 into perhaps the last showdown for Trump’s supporters who believed the election had been stolen. Marching from a rally where they were egged on by the president himself, rioters flooded into the Capitol and managed to stall the proceedings.

The state of the 2020 Democratic race before this final pre-Iowa debate, explained
Andrew Yang suspends his 2020 presidential campaign
Should you take public transit during a pandemic?
Trump won’t say the one thing that could really calm down his followers
How to watch Emma, Onward, and other new movies you can suddenly view at home
Two-thirds of US smokers say they want to quit. This company has a new idea for helping them.