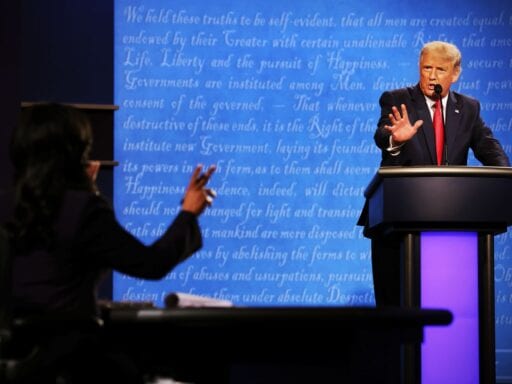 Trump “only” interrupted 34 times this time.

By Vox’s count, there were 96 interruptions and interjections in Thursday’s final presidential debate in Nashville, Tennessee.

At one point, after debate moderator Kristen Welker asked Biden about his vote for the 1994 crime bill, Trump repeatedly pushed the former vice president on why he didn’t accomplish his proposed criminal justice reforms during his eight years in the White House.

Trump: You had eight years to get it done. Now you’re saying you’re going to get it done because you’re all talk and no action, Joe.

Trump: You didn’t get anything done.

Trump: You got nothing done.

That was one of Trump’s 34 interruptions. Biden interrupted Trump occasionally as well (17 times by our count), but was much more likely to toss in a sarcastic or incredulous rejoinder, as he did when Trump was discussing climate change:

Trump: Solar doesn’t have it yet. It’s not powerful enough yet to really run our big beautiful factories that we need to compete with the world. So —

Trump: It’s all a pipe dream …

While we didn’t count the interruptions in the first debate, the follow-up certainly felt more civil (and by Slate’s measure, Trump interrupted 128 times all by himself in the first debate). This could be a win for the Commission on Presidential Debates, which introduced a mute button following the first unwieldy debate, but it’s equally plausible Trump’s relative restraint is due to polling indicating Americans didn’t approve of his first performance.

What is an interruption?

Interruptions are really hard to define.

As Kristin Anderson, professor of psychology at the University of Houston, told FiveThirtyEight in 2016 after another interruption-laden debate, “It’s unimaginable how many definitions of interruptions I’ve seen in the [scientific] literature. These are definitions that have to be operationally defined and submitted to peer review, and you still get a lot.”

Vox used the following rules for counting interruptions and interjections:

If after reading these rules you think there’s still quite a bit of room for subjectivity, you’re right, and it’s for good reason.

Imagine a normal conversation where someone who is listening says “yeah” in agreement with you while you’re speaking. That’s not something we’d usually consider to be an interruption, because in our normal lives we use tone and context to judge these exchanges. As FiveThirtyEight’s Maggie Koerth explained four years ago, there’s “something scientists call ‘back-channeling’ — the ‘yeah’ or ‘mm-hmmms’ that we all toss out while listening … and which are generally meant to encourage the speaker to continue.”

However, during a debate it’s difficult for us to judge objectively which of these interjections are truly disruptive and which were not intended to be. So we defaulted to counting them.

What’s clear from the breakdown of interjections versus interruptions is that Biden is much more likely to stop talking once he interjects and the other person doesn’t cede the floor. He also allowed himself to use verbal tics like “oh god” while Trump was speaking which, while non-disruptive, did spike his tally of interjections significantly.

Joe Biden is a master of the incredulous “come on!”

It’s too soon to tell how Americans will view the final debate. But the chaos of the first debate may have set the bar low enough for Trump to appear reasonable — despite “only” interrupting his rival and the moderator 34 times.

The real stakes in the David Shor saga
Inside Pedialyte’s journey from toddler flu remedy to hangover fix
The difference between the Grammys’ Song, Album, and Record of the Year categories, explained
How the press calls elections, explained
Taylor Swift on her victory against the man who groped her: “We have so much further to go”
The debate over Donald Trump’s alleged n-word tape, explained