Is it immoral if you feel schadenfreude about Trump’s Covid-19? 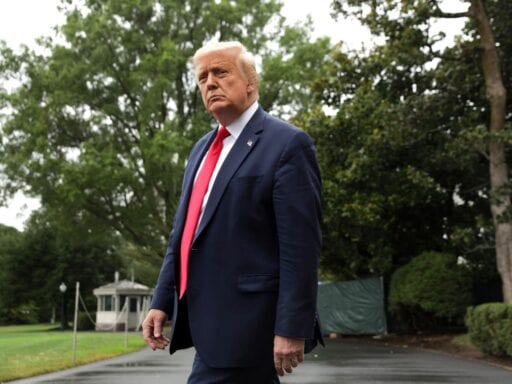 The ethics of feeling smug about another’s misfortune, explained.

When an older man tests positive for a pathogen that can kill him, is it wrong to feel gleeful about it? Ordinarily, we’d probably all agree the answer is yes.

But what happens when that older man is President Trump, and the lethal pathogen is one he’s spent months downplaying, to the detriment of hundreds of thousands of Americans who’ve gotten sick or died from Covid-19 under his leadership? What happens when he’s exposed several of his own staff members and supporters to the virus, after hosting a White House reception that now looks like it may have been a superspreader event?

Some prominent Democrats, including President Obama and former Vice President Joe Biden, immediately wished Trump a speedy recovery on Twitter. MSNBC’s Rachel Maddow did likewise, adding, “This virus is horrific and merciless — no one would wish its wrath on anyone.”

But many people did wish its wrath on Trump. Upon hearing that Trump and his allies had tested positive for the coronavirus, some instinctively took delight in the news — and wished for the president to die. Twitter, Facebook, and TikTok all reminded users that expressing this type of death wish is not allowed on the platforms. Many users objected, with Rep. Alexandria Ocasio-Cortez and Rep. Rashida Tlaib noting that they routinely get death wishes on Twitter and the platform doesn’t seem to care.

Plenty on the left refused to wish Trump well, slamming the liberal civility politics that would have everyone show etiquette no matter what. As Yolanda Pierce, the dean of Howard University’s divinity school, put it: “I will not perform false politeness in the presence of evil.” A few scoffed at all the tone policing, saying Trump wouldn’t have shown Biden the same courtesy if he were the one who had tested positive.

And there are limits to empathy, some argued. Mary Trump, the president’s niece, tweeted this hours after her uncle’s diagnosis: “I reserve my sympathy, empathy, and despair for those who are sick and for those who have died because they were misled, lied to, or ignored. Wear a fucking mask. #VOTE.”

Meanwhile, some Americans were wrestling with more ambivalent feelings. They wished that Trump would die … and then felt guilty about that. Schadenfreude, feeling joy at another’s misfortune, often produces a bitter aftertaste of shame. And Twitter users on both the right and the left were quick to shame the schadenfreuders.

I agree with this 100%. Especially from physician colleagues who are actively mocking Trump— this is not what we were trained to do. I wouldn’t wish this disease upon anyone. And having true empathy even for those whom we may have negative feelings toward speaks to who we are. https://t.co/mi9wd8VuKF

So who’s right? Are there some conditions under which it’s fine to feel smug at another’s misfortune — or should we have empathy even for people who we believe have caused a lot of harm, and who are now reaping that very same harm in turn?

The answer isn’t obvious. For centuries, philosophers have been engaged in a rich debate over the morality of schadenfreude. Some think it’s always immoral, even if it’s directed at the most powerful man on the planet, because they believe it’s rooted in pure cruelty. But others say that schadenfreude is sometimes rooted in other emotions, and whether it’s morally acceptable or not depends on the emotion underlying it.

Even if it is morally acceptable, mind you, that doesn’t mean it’s a great feeling to indulge — so it’s worth considering some other options.

How philosophers understood the morality of schadenfreude

The history of Western philosophy is full of thinkers who thought schadenfreude was a moral failing, period. The 19th-century German philosopher Arthur Schopenhauer, for example, saw it as rooted in pure malevolence. He believed that when we’re feeling this way, we’re taking delight in the other person’s misfortune even when there’s no benefit to us. It’s not like we’re happy because we think we’re going to profit off the other’s suffering — we’re just being cruel. So it’s a “diabolical” emotion that should not be indulged.

The 19th-century French essayist Charles Baudelaire had a different take. He said schadenfreude is often rooted in a sense of superiority. If you watch someone slip on the ice, he wrote, you feel a sneaky sense of pride in yourself: “I don’t fall, I don’t; I walk straight, I do; my footstep is steady and assured, mine is.” You’re not just being cruel for the sake of being cruel — your schadenfreude has an instrumental role to play. You’re unconsciously boosting your self-esteem by comparing yourself favorably with that other bungler over there. What you’re taking delight in is the sense that you’re smarter and better than them.

According to the 16th-century philosopher Michel de Montaigne, schadenfreude is really about our own vulnerability. When you exult at someone else’s calamity, you’re really exulting in the realization that you, by comparison, are safe. That person over there is sick — you’re not sick, thank goodness! The idea that schadenfreude may be grounded in awareness of our own susceptibility to harm offers a more sympathetic lens on the emotion.

René Descartes, in the 1600s, had a totally different way of understanding schadenfreude. He said it arises when calamity befalls somebody who we think deserves it. When we watch someone act poorly and then see them get their comeuppance, we may rejoice because we genuinely care about fairness and justice. There’s a certain pleasure in seeing justice triumph. If that’s what’s underlying our joy, a bout of schadenfreude could potentially be a morally permissible feeling.

Some contemporary philosophers take this same tack, arguing that schadenfreude is not a moral failing — it’s permissible unless it drives a causal chain that produces an immoral act.

There’s no reason to assume that only one feeling can be motivating an experience of schadenfreude. There’s likely to be a mix of feelings all coming together at once.

In the case of Trump’s illness, those who feel schadenfreude are probably feeling a mingled sense of superiority (per Baudelaire), vulnerability (per Montaigne), and justice (per Descartes). And yes, there may well be some malevolence in there, too; there’s no shortage of hatred for the “other side” in this highly politically polarized nation.

It’s natural to harbor a mix of emotions like this. After all, we’re talking about a president who insisted that Covid-19 is no big deal, who mocked mask-wearers and social-distancers, and whose failures are responsible for the deaths of many. There’s a certain superiority-fueling irony in seeing Trump fall sick, and, especially for those whose loved ones have died of the disease, a sense that justice is finally being served.

By examining how much of each emotion we are (consciously or unconsciously) harboring, we can learn something about ourselves. As the cultural historian Tiffany Watt Smith has pointed out, “Schadenfreude tells you things you don’t know.”

But although schadenfreude may be morally permissible in some cases, that doesn’t mean it’s morally praiseworthy. Even if we determine that our schadenfreude is driven by the pleasure of seeing justice served, we have to ask ourselves whether we’ve embraced a punitive understanding of justice — one that doesn’t actually help the world become a better place.

That said, what if someone wishes for Trump to die, not out of pure punitiveness, but out of a desire for Americans to get a new president who that person believes would save many lives?

Whether you think this is ethically acceptable depends a lot on your preexisting moral commitments. Specifically, you’ll answer differently depending on which school of ethics you gravitate toward: utilitarianism, deontology, or virtue ethics. Here’s a brief (and admittedly oversimplified) breakdown.

If you’re a utilitarian, you might argue this is a perfectly acceptable wish because something is moral if it produces good consequences — and having a president who doesn’t bungle a national pandemic response would prevent a lot of death, which is clearly a good consequence.

But if you’re a deontologist (also known as a Kantian), then you’d argue this is an unacceptable wish because something is moral if it’s fulfilling your duty to others and immoral if it’s not. Immanuel Kant famously said we have a duty always to treat human beings as ends in themselves, not means to our ends. Wishing death upon someone — even if it’s to save many more people from death — is treating that someone as a means.

A virtue ethicist would likely agree with the deontologist that wishing death on someone is unacceptable, but for a somewhat different reason: By doing so, you’re cultivating in yourself a negative trait, rather than a virtuous trait like empathy. Even if it doesn’t actually harm anybody else (wishes are different from actions, after all), it harms you as a moral being, potentially chipping away at your capacity for empathy in the long term.

If we examine what’s under the hood of our schadenfreude and don’t like what we see, it’s worth remembering that we have this option at our disposal.

The racial reckoning in women’s digital media
Vermont’s Christine Hallquist could become the US’s first transgender governor
Hurricane Florence: where you can donate to help with disaster relief and recovery
Hurricane Dorian photos: the aftermath of a Category 5 storm
Public transit in the US is already underfunded. The pandemic has made it worse.
Who will get the Covid-19 vaccine first? A CDC advisory panel just weighed in.