It turns out money can kind of buy happiness after all 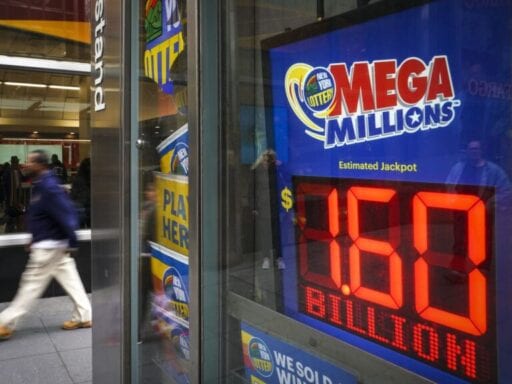 A new paper argues that, actually, winning the lottery totally does make you happy.

Does winning the lottery even make you happier? For a long time, researchers said no. Research hadn’t found any conclusive evidence that people who won large sums of money were happier afterward. There was even some evidence they were worse off.

This fact became widely known, partially because it’s so appealing to many people. It’s nice to think that life satisfaction isn’t just about how much money you have, that other things matter more, that we can’t solve all our problems with a sudden infusion of cash.

But there’s a problem with that research: It’s probably wrong. At least, that’s what is argued by economists Andrew J. Oswald and Rainer Winkelmann at the University of Warwick in the new academic book The Economics of Happiness. Their chapter in the book makes the case that past research about the lottery was badly designed, which is why it found the counterintuitive conclusion that lottery winnings don’t make us happy, instead of the much more boring truth: They totally do.

Economists have good reason — beyond just curiosity — to care whether lottery winners are happier than the rest of us. Lottery winners represent a great chance to explore whether increases in income make people happier. We know that there’s a well-established association between higher income and happiness, but it can be tricky to say for sure that it’s the higher income that causes happiness. Maybe happier people earn more money, or depressed people tend to earn very little money, or people with some general quality of life successfulness will be both happy and rich.

Lottery winners are selected at random, so they can help answer this question for us: Does money cause happiness?

Here’s what we know about the effects of lottery winnings

The first paper to take a serious look at the happiness of lottery winnings was a 1978 paper by Philip Brickman and colleagues, titled “Lottery winners and accident victims: Is happiness relative?”

The theory they were testing was that big life events didn’t affect happiness much. A big positive event, like winning the lottery, made smaller positive effects pale in comparison (and contributed less to happiness); similarly a big negative event, like a paralyzing accident, would not make people much sadder. They interviewed 29 accident victims, 22 lottery winners, and 22 people in the control group (meaning they didn’t win a lottery or get paralyzed in an accident). They indeed found that the lottery winners were not happier than the controls by a statistically significant amount.

That, the new paper by Oswald and Winkelmann argues, was their first mistake. Twenty-two lottery winners is simply not very many; the difference in happiness between them and the control group would have needed to be enormous for Brickman to find a statistically significant effect.

But later studies of lottery winners found results suggesting that there is an effect on happiness. A 2007 study in Britain, for example, found that the recipients of medium-sized lottery wins (between 1,000 and 120,000 pounds) “go on eventually to exhibit significantly better psychological health.” Their sample size is pretty small too — 137 observations — but six times as large as the sample size in the initial study.

So what on earth is going on?

The analysis by Oswald and Winkelmann is that nearly all of the research up to this point has been using samples that are too small to consistently detect real results. As a result, some of them have found results and some of them have found none; some have found results only for certain subgroups (like less-educated lottery winners) and some have found opposite results for different measures of wellbeing (like physical and mental health). But the confusion would all go away if we had enough data.

That’s where their own study comes in. “We have access to more winners with economically substantial winning amounts than almost any other study before us,” Oswald and Winkelmann argue. In part because people keep winning the lottery, the high-quality data from Germany used for many of these studies now has 617 lottery winners with significant earnings. (The country keeps good records on this.) That’s still not a very large sample size for complicated social science research, but it’s a whole lot better than 22, or even 137. (Counting only winnings of more than 2,500 Euros ($2,770), Oswald and Winkelmann are down to 342 winners to analyze.)

Unlike many of the previous studies, they find, “All effects of interest are statistically significant.” Winning the lottery does make you happier. Winning more money has a more pronounced effect on your happiness. There’s certainly a lot more work to do in this vein, from testing non-German data sets to exploring how life satisfaction from a lotto win sticks around five or 10 years out. But if these results hold up, then the mysterious paradox that puzzled economists — why doesn’t winning money make people more happy? — might be solved. Winning money does actually make people more happy.

The early studies look likely to have fallen prey to a common problem in social science research — studies that aren’t powerful enough to detect effects even if there are some. A surprising share of published studies are underpowered, meaning they collect so little data they wouldn’t find a result even if one was real. This can lead to false negatives — like the result that lottery winnings don’t make people happy — and false positives, when the small sample size produces noise that is interpreted as a positive result. Making studies bigger tends to solve this, but it’s expensive — so underpowered studies are likely to plague research for some time.

So the early research into the effects of the lottery may have gotten things wrong. But that’s not to say that every lottery winner is better off. It’s very plausible that a certain type of person is vulnerable to ending up worse-off than they started (though it’s unwise to try to analyze too many subgroups of winners when you have a small sample size to start with; you’re nearly sure to turn up false positives in your results). There are certainly notorious stories of people who won the lottery and ended up much worse off than if they’d never won at all.

But on the whole, it looks like the obvious is usually true — having more money makes people less stressed and more satisfied with their life. Money might not buy happiness, but it buys a lot of things that make the pursuit of happiness easier.

The new Democratic House just approved two bills to reopen the government
Vox Sentences: A mysterious, paralyzing disease hits the US
4 immigration questions that have gone unanswered in the Democratic debates
How to browse a used bookstore
How China is ruthlessly exploiting the coronavirus pandemic it helped cause
White House national security advisor denies Russian meddling on Trump’s behalf