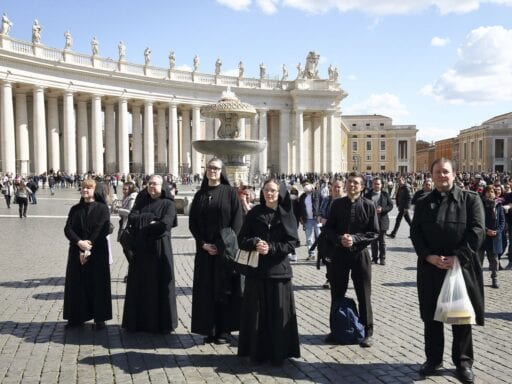 Share
Loading...
A group of nuns in St. Peter’s Square follows Pope Francis from the large screens, who for the first time recites prayers in the private library of the Apostolic Palace due to the coronavirus on March 8th, 2020. | Mondadori Portfolio via Getty Images

A quarantine that began in the country’s north — the epicenter of the outbreak — has now been extended.

Italy is now restricting travel across the entire country, an unprecedented move by the government as it furiously tries to stop the spread of the novel coronavirus.

Italy is the epicenter of the coronavirus outbreak in Europe, and the country is struggling to contain the virus: The number of cases in Italy has surpassed 9,000, and at least 450 people have died.

On Monday evening, Italian Prime Minister Giuseppe Conte said he was extending a ban on travel already in place in northern Italy to now cover all of the country — more than 60 million people. This effectively bars all personal travel that isn’t for essential work, or for health or family emergencies.

All public gatherings, including weddings and funerals, are also banned, and sport events are suspended. Theaters, gyms, ski resorts, and discos are shut down. Last week, Italy closed all schools until March 15. On Monday, Conte said that order would be extended almost a full month, until April 3.

The dramatic measures, which Conte is calling the “I Stay Home” decree, will go into effect Tuesday morning. Conte said Italy was facing a national emergency and needed to take these measures to stop the spread of the virus and to prevent hospitals from being overloaded. “This is the moment of self-responsibility,” he said, after announcing the travel ban in the north.

Previously, people across Italy were being told to stay at least one meter away from others at bars, cafes, and in supermarkets. Those “social distancing” measures are meant to thin crowds and stop people from spreading the virus, though people who experience symptoms of the coronavirus had been instructed to stay home altogether. But with public events canceled and even more restrictive travel measures are in place, all of Italy is essentially a “red zone” now.

Riots also broke out in prisons across the country over the weekend and into Monday after facilities banned family visits and restricted leave applications, leaving at least six dead. Many of the incarcerated are concerned that they would be particularly vulnerable should the virus spread in prison.

This has been an intense few days for Italy as it struggles to curtail the coronavirus. Initially, draft measures leaked on Sunday before the government’s formal announcement to impose a quarantine in northern Italy, causing confusion and anger among local leaders.

It also sparked mass panic, as people in the north rushed to board trains or get in cars to head to other parts of Italy to avoid the new restrictions. Northern Italy, which is the country’s economic center, attracts workers from southern Italy. In Puglia, for example, officials said those returning from the north would also face quarantine restrictions. Now, of course, everyone is looped into this latest decree.

The extension of this order to the entire country about 24 hours after the initial order underscores the challenges of imposing such severe restrictions in a democratic country like Italy. Chinese authorities put into place strict quarantine and travel restrictions, but Italy, as Conte said, is much more dependent on the public taking “self-responsibility” through social distancing and limiting movement.

Conte urged Italians not to “try and be clever” to get around the restrictions. Some prominent Italian figures used the hashtag #iostoacasa (“I’m Staying Home”) on Twitter to encourage people to abide by the new rules.

The rollout of Italy’s new measures marks a turning point for a country that’s struggling to contain the spread of coronavirus. And it’s not even clear that this extraordinary order will do enough to slow the contagion.

Prominent politicians, including Nicola Zingaretti, the leader of Italy’s Democratic party (which is part of the governing coalition), has tested positive — leading to fears about spread and exposure in the government.

The latest directive also puts into perspective just how damaging the outbreak will be on Italy’s already fragile economy.

Italy’s government will provide a 7.5 euro stimulus (about $8.5 billion) — “shock therapy” — to deal with the fallout from the virus, but uncertainty prevails. The hardest hit areas in the northing, including Lombardy, with Milan as its capital, and Veneto, home to Venice, together account for about a third of Italy’s GDP. This more expansive quarantine put even more pressure on businesses, to say nothing of tourism and travel to the region.

The mass quarantine is also raising fears about the potential economic impact across the eurozone. The European Central Bank meets Thursday, and everyone is waiting to see what interventions it may make to try to stave off a recession within the bloc.

Italy is so far the hardest hit in Europe, but the virus is spreading throughout the continent. So far, the European Union has resisted calls to completely seal off Italy’s borders, though neighboring countries have increased border checks. Some leaders, specifically Czech Prime Minister Andrej Babis, have been more forceful in calling on the EU to ban travelers in Italy.

Some of the continent’s right-wing populists have also exploited the coronavirus as a rallying cry to seal its borders and bar migrants. Matteo Salvini, a right-wing populist and anti-immigrant politician in Italy, said in February that the government had underestimated the coronavirus by “allowing the migrants to land from Africa, where the presence of the virus was confirmed.” (As of March 4, there have been just 11 confirmed cases in Africa, according to the World Health Organization.)

But the rapid spread of the coronavirus is shattering the sense that it can be contained by borders. Italy is trying to slow the outbreak, but it’s unlikely it can deal with the coronavirus, or the economic fallout from it, without cooperation and coordination from the rest of the EU.

Google just got access to millions of medical records. Here are the pros and cons.
Some sage advice for Donald Trump about picking a fight with Bob Woodward, from Donald Trump
The risks of going too big on stimulus are real — but going too small could be riskier
Just because you’re working from home doesn’t mean your boss isn’t watching you
The unwarranted controversy over AOC’s nomination of Bernie Sanders, explained
Israel’s West Bank annexation plan and why it’s stalled, explained by an expert