“It’s criminal”: A Texas community left without aid in the cold 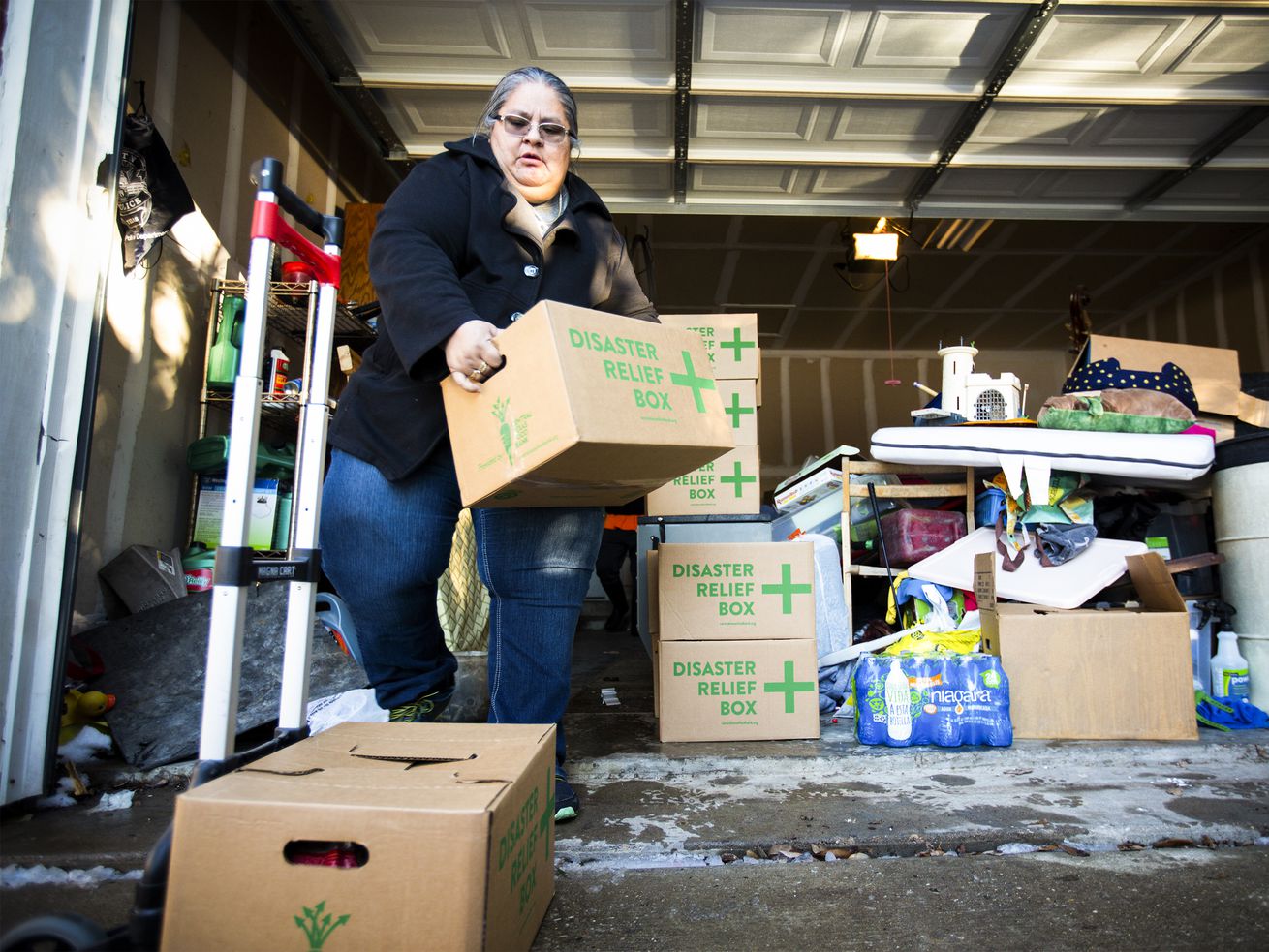 An Austin organizer explains how the Texas freeze left her already vulnerable community in crisis.

Gloria Vera-Bedolla, a Latina community organizer and mother of three, feels like her neighborhood near Austin, Texas, has been forgotten in a deep freeze that has plunged the state into a humanitarian crisis.

“We continue to be the victims of social injustice, food injustice, systemic racism — all of it,” she said. “And lots of people don’t speak up because they’re not used to being heard.”

Known as Forest Bluff, Vera-Bedolla’s neighborhood is on the east side of Interstate 35, where a vast share of the city’s Black and Hispanic populations reside. Her family moved there in 2017 after rising property taxes pushed them out of central Austin, drawn by cheaper real estate and more square footage.

But the nearest major grocery store is more than 10 miles away and there is no public transportation, making it a food desert. Even under normal circumstances, the tap water sometimes runs brown. Many of her neighbors are undocumented immigrants who live paycheck to paycheck and are ineligible for public benefits. Her 24-year-old son is reluctant to visit because he’s been pulled over so many times by the Travis County Sheriff’s Department for no stated reason.

When the record-breaking winter storm set in on Sunday night, dropping 7.5 inches of snow in parts of the county, it only exacerbated challenges that her community already faced.

Unlike some in her neighborhood, Vera-Bedolla’s family never lost power, but their running water shut off, their furnace wasn’t working absent a sufficient supply of propane, and the flame on their gas stove was lower than a candle, making it hard to cook until her parents, who also live in Austin, delivered an electric hotplate on Thursday.

She said she was in a better position than her neighbors, many of whom don’t have cars to access food or other supplies, have poorly insulated houses, and are elderly or caring for small children. One neighbor who does not have renters’ insurance and whose pipes froze and burst will have to pay out of pocket for the repairs.

There wasn’t any help coming for Forest Bluff that Vera-Bedolla hadn’t requested herself as a liaison between her community and the city government, or from nonprofits working to administer relief. In addition to her day job in admissions for the Central Texas Allied Health Institute, she has been working with the nonprofit Community Resilience Trust, which is working to address racial equity issues in Austin.

She had managed to procure 30 boxes of emergency food from Central Texas Food Bank and was urging the city’s emergency operations center to deliver a truckload of water on Friday. Meanwhile, her husband Roberto Bedolla had been breaking up the ice on the streets to allow cars safe passage, since the city hadn’t sent anyone to their neighborhood to sand them.

The problem isn’t power anymore, but access to food and water

Earlier in the week, the dangerously cold temperatures and collapse of the Texas power grid left millions in the state unable to heat their homes.

Vera-Bedolla and her husband slept by their fireplace under layers of blankets in the living room, waking up periodically at night to feed the flames with an increasingly depleted supply of wood. By Friday, they were down to their last two logs. Meanwhile, their two daughters, 19-year-old Bianca and 6-year-old Daniela, slept in the same bedroom with an electric space heater to keep them warm.

They managed to keep the temperature to around 55 degrees in the warmest rooms of the house throughout the crisis, but her neighbors, whose houses were built with less insulation, were shivering in indoor temperatures in the 30s and 40s.

On Friday, Texas began to thaw out, with temperatures rising to over 40 degrees in Austin. It is expected to continue warming up throughout the weekend, melting the ice that had made roads impassable and reducing pressure on the electric grid, which has restored service to all but about 58,000 residents across the state as of late Saturday afternoon. And Vera-Bedolla said Friday that her gas supply had also resurged, allowing her to heat her house.

But Texans are now facing a residual crisis, of limited access to potable water and food. Many grocery stores closed for days and those that were open often had empty shelves, with delivery trucks unable to restock them until late in the week. Much of the state also remains under “boil water notices,” requiring residents to boil water for two minutes to kill any contaminants that could cause sickness, after frozen pipes burst in people’s homes and businesses and in public water mains, draining reservoirs to dangerously low levels.

In Forest Bluff, those who don’t own cars had no choice but to walk to nearby convenience stores, which charge exorbitant prices for food that is often expired. This week, Vera-Bedolla said she saw more than 150 people lining up outside the stores, which had at that point been “picked clean.”

The water pressure came back in her house on Friday night, but she was still urging the city emergency operations center to deliver 400 cases of bottled water to a nearby middle school so her neighbors don’t have to drink potentially contaminated water from the tap.

When she has been able to cook a meal this past week, she has been making extra and bringing it to whoever wants it, including two neighbors who have infants to care for.

She also went door-to-door to deliver the emergency food boxes — packed with oatmeal, rice, spaghetti sauce, pasta, and canned beans, soups, and fruit — to people going hungry in her neighborhood. One woman was so grateful that she praised God, making the sign of the cross.

“I know it’s not going to be enough, but it’s going to relieve food insecurity for some families,” Vera-Bedolla said. “There are little kids going without.”

Vera-Bedolla said she feels abandoned by her government — and it’s not the first time she has felt that way.

“We’re fighting these systems that were not made for the success of Black and brown people,” she said.

Her frustrations are shared by people who have been seeking justice and more equitable treatment for people of color in Austin, which is among America’s most economically segregated cities, and its only high-growth city where Black people represent a declining share of the population.

When former Texas Gov. Rick Perry said earlier this week that Texans would rather suffer blackouts than hand over control of their power grid to the federal government, Chas Moore, the executive director of a grassroots organization called the Austin Justice Coalition, said that the comments felt far removed from the reality that minority communities face when catastrophe hits.

“If you’re in a house that’s not well insulated and you don’t have access to clean, healthy food, chances are your experience with this whole thing is going to be completely different,” he said. “We bear the brunt of the debacle when things go awry. There’s just no way for people in certain situations to survive disasters like this.”

Quincy Dunlap, the president and CEO of the Austin Area Urban League, said that while city officials have done their best to respond to an unanticipated weather anomaly, it’s obvious that relief hasn’t been distributed in an equitable manner.

I-35 was built as a physical racial and economic dividing line, and once again, it served its original purpose earlier this week: On the affluent west side, empty corporate offices in downtown Austin glowed “like a Christmas tree,” never appearing to lose power or heat throughout the crisis, Dunlap said. Meanwhile, most of East Austin was in darkness.

“When we switch the power out, the people should have the power first, and not the businesses unless they are deemed essential to supporting the people in the crisis response,” Dunlap said. “There is no human value in that distribution of power. There was no equity there.”

For Moore, it didn’t feel like a one-off incident.

“It’s not new. It’s not surprising,” he said. “It’s the boiling point for systemic oppression.”

Montinique Monroe is a photojournalist in Austin, Texas, where she was born and raised. She contributed reporting for this article.

Democrats’ impeachment report reveals new phone records from Giuliani and others
Amazon will start letting people pay with cash because not everyone has credit cards
Pensacola, Florida, Naval Air Station shooting: what we know
The US has reached a grim milestone: 100,000 coronavirus deaths
Ahead of a far-right rally in Portland, Trump tweets a warning to antifa
Former Blackwater guard goes on trial for second time for role in mass shooting in Iraq