I’ve read the plans to reopen the economy. They’re scary. 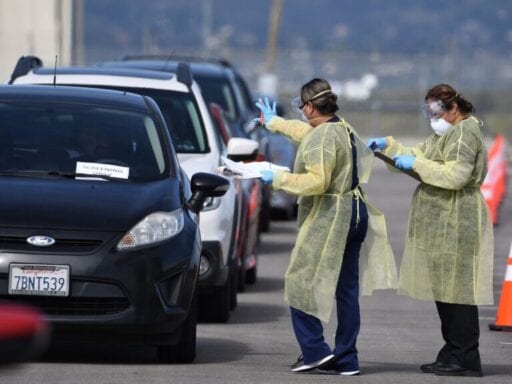 There is no plan to return to normal.

Over the past few days, I’ve been reading the major plans for what comes after social distancing. You can read them, too. There’s one from the right-leaning American Enterprise Institute, the left-leaning Center for American Progress, Harvard University’s Safra Center for Ethics, and Nobel prize-winning economist Paul Romer.

I thought, perhaps naively, that reading them would be a comfort — at least then I’d be able to imagine the path back to normal. But it wasn’t. In different ways, all of these plans say the same thing: Even if you can imagine the herculean political, social, and economic changes necessary to manage our way through this crisis effectively, there is no normal for the foreseeable future. Until there’s a vaccine, we either need economically ruinous levels of social distancing, a digital surveillance state of shocking size and scope, or a mass testing apparatus of even more shocking size and intrusiveness.

The AEI, CAP, and Harvard plans aren’t identical, but they’re similar. All of them feature a period of national lockdown — in which extreme social distancing is deployed to “flatten the curve” and health and testing capacity is surged to “raise the line.” That’s phase one. Phase two triggers after a set period of time (45 days for CAP, three months for Harvard) or, in the AEI plan, after 14 days of falling cases and a series of health supply markers AEI.

All of them then imagine a phase two, which relaxes — but does not end — social distancing while implementing testing and surveillance on a mass scale. This is where you must begin imagining the almost unimaginable.

The CAP and Harvard plans both foresee a digital pandemic surveillance state in which virtually every American downloads an app to their phone that geotracks their movements, so if they come into contact with anyone who later is found to have Covid-19, they can be alerted, and a period of social quarantine can begin. Similarly, people would scan QR codes when boarding mass transit, or entering other high-risk public areas. And GPS tracking could be used to enforce quarantine on those who test positive with the disease, as is being done in Taiwan.

To state the obvious: The technological and political obstacles are massive. While similar efforts have borne fruit in Singapore and South Korea, we are a very different country, with a much more mistrustful, individualistic culture. Already, polling shows that 70 percent of Republicans, and 46 percent of Democrats, strongly oppose using cellphone data to enforce quarantine orders.

The CAP plan tries to answer these concerns, but in trying to imagine an answer, it shows the difficulty of the task. It’s worth quoting the CAP proposal at length:

The entity that hosts the data must be a trusted, nonprofit organization—not private technology companies or the federal government. The app could be developed for a purely public health nonprofit entity such as the Association of State and Territorial Health Officials (ASTHO)—an organization that represents state health officials—which would host the data. Congress or foundations could provide funding to develop and operate the technology. States licensing the app could provide ongoing operational funding to ASTHO, provided states receive federal funding for this purpose.

• Additional protections must include the following:

• The amount of data needed and shared must be minimized

• This system must be transparent

• Data must be collected, secured, and stored within the United States

• Data must be automatically deleted after every 45 days

• The sharing of data with the federal government, except for the Centers for Disease Control and Prevention (CDC), must be prohibited

• Any data shared publicly must be anonymized

As a condition of receiving a COVID-19 test in the future, individuals may be required to download the app, which would include their test result. For others, the app would be voluntary, although the vast majority of people could be expected to download it to see if there are cases in their neighborhood or near their workplace.

I’m not here to say that this, or anything else, is impossible. But it is light-years beyond the kind of political leadership and public-private coordination we’ve seen thus far. Who is going to spearhead the effort? President Donald Trump? House Speaker Nancy Pelosi? Bill Gates? Who is trusted enough, in this country in this moment, to shape this? And even if they could pass it, can we build it, and do so quickly? Force adherence to it, and quickly? Are we really going to deny tests to anyone who refuses to download the surveillance app? And what about communities with less digital savvy?

The alternative to mass surveillance is mass testing. Romer’s proposal is to deploy testing on a scale no one else is contemplating — 22 million tests per day — so that the entire country is being tested every 14 days, and anyone who tests positive can be quickly quarantined. He shows, in a series of useful simulations, that even if the test has a high false-negative rate, the retesting is sufficient to keep the virus contained, and thus the country can return to normalcy rapidly. Of the various plans, this one seems likeliest to permit a true and rapid economic recovery.

But it is hard to imagine a testing effort of this scale, either. So far, America is struggling to get into the millions of tests per week. This requires the US to do tens of millions per day. Most experts I’ve spoken to doubt that’s realistic anytime soon, though some believe it’s possible, eventually. So far, we’ve added testing capacity largely by repurposing existing labs and platforms. To add more, we need to build more labs, more machines, more tests. And there are already shortages of reagents, swabs, and health workers.

But even if those constraints could be overcome, how are these 22 million daily tests going to be administered? By whom? How do we enforce compliance? If you refuse to get tested, are you fined? Jailed? Cut off from government benefits? Would the Supreme Court consider a proposal like this constitutional?

The AEI proposal is the closest thing to a middle path between these plans. It’s more testing, but nothing approaching Romer’s hopes. It’s more contact tracing, but it doesn’t envision an IT-driven panopticon. But precisely for that reason, what it’s really describing is a yo-yo between extreme lockdown and lighter forms of social distanncing, continuing on until a vaccine is reached.

This, too, requires some imagination. Will governors who’ve finally, at great effort, reopened parts of their economies really keep throwing them back into lockdown every time ICUs begin to fill? Will President Donald Trump have the stomach to push the country back into quarantine after he’s lifted social distancing guidelines? What if unemployment is 17 percent, and his approval rating is at 38 percent?

And even if the political hurdles could be cleared, it’s obvious, reading the AEI proposal, that there’ll be no “V-shaped recovery” of the economy. Scott Gottlieb, the former FDA commissioner who helped craft the plan, says he thinks something like 80 percent of the economy will return — that may sound like a lot, but it’s an economic collapse of Great Depression proportions.

I don’t want anyone to mistake this as an argument for surrendering to the disease. As unlikely as these futures may be, I think the do-nothing argument is even less plausible: It imagines that we simply let a highly lethal virus kill perhaps millions of Americans, hospitalize tens of millions more, and crush the health system, while the rest of us go about our daily economic and social business. That is, in my view, far less likely than the construction of a huge digital surveillance state. I care about my privacy, but not nearly so much as I care about my mother.

My point isn’t to criticize these plans when I have nothing better to offer. Indeed, my point isn’t to criticize them at all. It’s simply to note that these aren’t plans for returning to anything even approaching normal. They either envision life under a surveillance and testing state of dystopian (but perhaps necessary!) proportions, or they envision a long period of economic and public health pain, as we wrestle the disease down only to see it roar back, as is currently happening in Singapore.

What’s even scarier to consider is that the debate between these plans is far beyond the political debate we’re actually having. As of now, the White House has neither chosen nor begun executing on a plan of its own. That’s a terrible abdication of leadership, but reading through the various proposals, you can see why it’s happened. Imagine you’re the president of the United States in an election year. Which of these futures, with all its costs and risks and pain, would you want to try and sell to the American people?

One final takeaway from all this: If there is literally anything more we can possibly do to accelerate the development of vaccines or therapeutics, we should do it.

Targeted ads can be more than annoying — they can have mental health consequences
In 2020, scientists documented hundreds of new species. Here are a few.
The paradox of Nikki Haley
Twitter announces Fleets and audio spaces, two new things Twitter didn’t really invent
Cori Bush wants to be the next progressive to upset a sitting congressman. Today’s her shot.
The growing number of children in custody on the US-Mexico border, explained