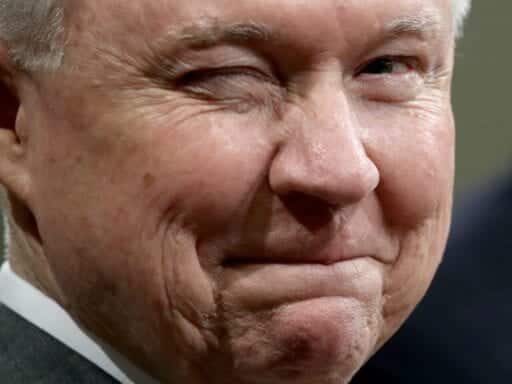 The Justice Department’s latest move is another nod to Christian nationalism by the Trump administration.

Monday, Attorney General Jeff Sessions announced the creation of a “Religious Liberty Task Force” which will enforce a 2017 DOJ memo ordering federal agencies to take the broadest possible interpretation of “religious liberty” when enforcing federal laws. That memo for example, prohibits the IRS from threatening the tax-exempt status of any religious organization that actively lobbied on behalf of a political candidate, which is not allowed under the Johnson Amendment.

In a bold speech delivered at the Department of Justice’s Religious Liberty Summit, Sessions characterized the task force as a necessary step in facing down the prevailing forces of secularism. “A dangerous movement, undetected by many, is now challenging and eroding our great tradition of religious freedom,” which, he said, “must be confronted and defeated.”

The task force will be spearheaded by Associate Attorney General Jesse Panuccio and Assistant Attorney General for the Office of Legal Policy Beth Williams. The Advocate reports that back in 2010, Panuccio, as an attorney, defended supporters of Proposition 8, a 2008 ballot measure that banned same-sex marriages in California for nearly five years. More specific details of the task force’s structure and organization have not yet been announced.

Sessions painted a nightmarish portrait of what he described as a lack of religious liberty protections plaguing American society. “We have gotten to the point,” he said, “where courts have held that morality cannot be a basis for law, where ministers are fearful to affirm, as they understand it, holy writ from the pulpit, and where one group can actively target religious groups by labeling them a ‘hate group’ on the basis of their sincerely held religious beliefs.”

Here, Sessions appears to be critiquing groups like the Southern Poverty Law Center, whose broad designation of “hate groups” has at times proven controversial for including groups like the evangelical Christian Family Research Council. Sessions added, ”Americans from a wide variety of backgrounds are concerned about what this changing cultural climate means for the future of religious liberty in this country.”

While the task force will only enforce the guidelines listed by the religious liberty memo, the language in Sessions’s speech was as significant as the creation of the task force itself. Using striking rhetoric and the incendiary narrative of culture wars, Sessions characterized America as an implicitly Christian nation under attack from secularists. In so doing, Sessions is continuing a wider pattern of the Trump administration: treating the federal government as a necessary participant in the longevity of Christian America.

He’s advocating for the kind of Christian nationalism — blending patriotism and evangelical Christianity — that the administration has consistently used to legitimize its aims and shore up its evangelical base.

Despite Sessions’s statement, religious liberty in America seems to be expanding. Earlier this year, the Supreme Court ruled that a Christian baker had the right to refuse to make a wedding cake for a same-sex couple, based on his religious beliefs.

Two other significant religious liberty cases — Burwell v. Hobby Lobby (2014), and Trinity Lutheran v. Comer (2017) — have favored religious organizations. In the former case, the Supreme Court ruled that evangelical Christian-owned Hobby Lobby had the right to refuse to cover contraceptive care for its employees, while in the latter, it ruled that a Lutheran church could receive state funds to build a playground on its property.

With the potential addition of Donald Trump’s nominee Brett Kavanaugh to the Supreme Court, the Court is expected to increasingly rule in favor of a broadened definition of religious liberty.

Meanwhile, in May, the DOJ announced a new office to protect religious liberty: an expansive watchdog initiative whose mission was to alert the federal government to “any failures of the executive branch to comply with religious liberty protections under law.” At the time, an unnamed White House representative told the Washington Post’s Michelle Boorstein that it would help the administration worry less about “where the church-state barriers are.

After Sessions gave his conference speech, he ceded the floor to Catholic Archbishop Joseph Kurtz, the former head of the United States Conference of Catholic Bishops, whose previous advocacy work includes lobbying against same-sex marriage and against anti-discrimination policies for LGBTQ workers.

Kurtz spoke about the necessity of partnerships between religious institutions and the government, and alluded to the importance of defending, for example, state-funded adoption agencies that turn away prospective LGBTQ parents on religious grounds. “There are some who claim that faith-based organizations must give up our convictions when we partner with the government to provide much-needed social services,” Kurtz said. “[But] … faith-based organizations are some of the most trusted groups within our society and excluding them makes no sense in a holistic society like ours.”

Sessions’s vision of religious liberty as, fundamentally, active and interventionist government support of religious identity seems to be in line with his wider political philosophy. Last month, for example, Sessions used the Bible verse Romans 13 to justify separating migrant families at the US-Mexico border. He used it on the grounds that the verse — part of a letter written by St. Paul urging an early Christian Roman community not to participate in a political uprising — legitimized absolute submission to government authority.

(Sessions’s own religious tradition, the United Methodist Church, recently formally censured him, calling for an ecclesiastical trial against him for, among other charges, inaccurately publicly representing the Christian faith).

The ACLU vociferously condemned the Task Force, tweeting that the Department of Justice “has no business licensing discrimination against LGBT people, women, and religious minorities.”

Ultimately, Sessions promised listeners, the task force would restore religious liberty to America — a liberty that, he heavily implied, was a primarily Christian prerogative.

Where Bernie Sanders’s online army goes now
No, Trump can’t delay the election
Trump is holding a rally in one of the country’s worst Covid-19 hot spots
Why the Pfizer and BioNTech vaccine is a cause for optimism — and skepticism
Twitter is planning to draft a policy on “dehumanizing speech”
Mitch McConnell calls House Democrats’ anti-corruption bill a “power grab”