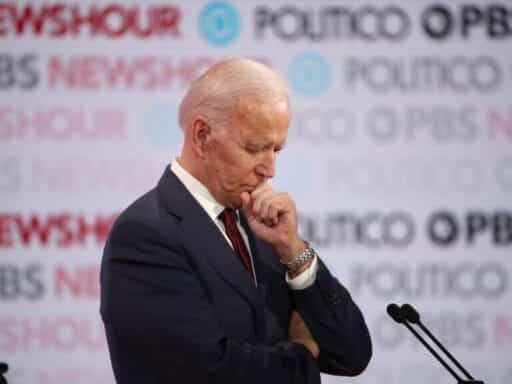 Biden’s poignant shoutout to a child who, like him, struggles with a stutter, revealed one of his superpowers.

A subtle shoutout former Vice President Joe Biden gave during Thursday’s Democratic debate to a child who struggles with stuttering, like he has for much of his life, revealed one of his superpowers — the ability to force people in the usually-shameless-orbit of President Donald Trump to apologize.

At the close of the debate, Joe Biden brought up a “call list” he and his wife Jill keep of “somewhere between 20 and 100 people” they regularly catch up with. He mentioned that one of the people on the list is a “little kid who says ‘I can’t talk, what do I do?’”

Though Biden didn’t explicitly say it, when he said “I can’t talk,” he impersonated the child’s stutter. Watch:

Here’s the moment at last night’s #DemDebate where Joe Biden, who stutters himself, impersonated a kid who stutters who he’s regularly in touch with pic.twitter.com/JDwz1FGulR

The moment was a poignant one. As John Hendrickson recently detailed for The Atlantic, Biden himself has waged a lifelong battle with stuttering. Though the former vice president has mostly mastered the speech issues that he struggled to overcome in his youth, he’s been public about it and has worked with kids who have speech difficulties themselves.

“I hope what they see is: Be mindful of people who are in situations where their difficulties do not define their character, their intellect,” Biden told Hendrickson, alluding to public perceptions of his stuttering, which may not even be noticeable to most, but was a major issue for him through college. “Because that’s what I tell stutterers. You can’t let it define you.”

Even before The Atlantic’s feature article, Biden’s experience with stuttering was moderately well-known. But one person who was apparently oblivious about it is former White House Press Secretary Sarah Sanders. She responded to Biden’s closing comments by mocking him in a remarkably callous tweet.

As you’d expect, Sanders’s tweet was quickly and widely criticized, including by Biden himself, who directly responded by writing, “I’ve worked my whole life to overcome a stutter. And it’s my great honor to mentor kids who have experienced the same. It’s called empathy. Look it up.”

I’ve worked my whole life to overcome a stutter. And it’s my great honor to mentor kids who have experienced the same. It’s called empathy. Look it up. https://t.co/0kd0UJr9Rs

Sanders initially tried to downplay the whole thing as an instance of her “not trying to make fun of anyone with a speech impediment,” but “simply pointing out I can’t follow much of anything Biden is talking about.”

But a short time later, in an unusual and commendable move for someone associated with Trump, Sanders ended up not only deleting her tweet, but apologizing to Biden, writing, “I actually didn’t know that about you and that is commendable. I apologize and should have made my point respectfully.”

I actually didn’t know that about you and that is commendable. I apologize and should have made my point respectfully. https://t.co/fbmVAqDoWI

Biden’s response to Sanders was a window into what he told Hendrickson about how he’d respond if Trump, who infamously mocked a reporter with a disability during the 2016 campaign, went after him for stuttering:

In Biden’s office, as my time is about to run out, I bring up the fact that Trump crudely mocked a disabled New York Times reporter during the 2016 campaign. “So far, he’s called you ‘Sleepy Joe.’ Is ‘St-St-St-Stuttering Joe’ next?”

“I don’t think so,” Biden says, “because if you ask the polls ‘Does Biden stutter? Has he ever stuttered?,’ you’d have 80 to 95 percent of people say no.” If Trump goes there, Biden adds, “it’ll just expose him for what he is.”

Biden’s exchange with Sanders only augmented what was already a very good night for the Democratic frontrunner. As my colleague German Lopez wrote in our debate winners and losers post, Biden, who mostly had a hard time in the debates until last night, “didn’t just coast; he genuinely did well.” And even though it may have flown below the radar for some at the time, he served as an inspiration for those who, like him, have had to overcome barriers to feel comfortable speaking publicly.

Russia reportedly offered the Taliban bounties for American soldiers. Trump denies knowing about it.
Vox Sentences: An impeachment week in the SCIF
Is it time to do away with job applicant drug testing?
Covid-19 testing in the US is abysmal. Again.
A new first US coronavirus death, a “second wave” warning: Wednesday’s coronavirus news
The Mexican ambassador to the US explains Trump’s claim of a new agricultural deal