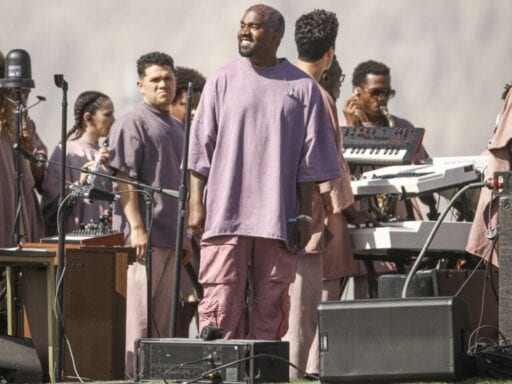 Kanye West’s new album is brief and underwhelming, despite the build-up.

But said work — on West’s new album Jesus Is King, released today after much hype and numerous delays — hasn’t amounted to much. The scant 27-minute album contains 11 songs that each run about two minutes long, the majority of them rousing gospel tracks instead of the hip-hop he’s best known for.

Jesus is King is designed to be a studio album version of West’s regular Sunday Service events, lengthy private performances where celebrities and influencers enjoy gospel music curated and performed by West himself. What seems to differentiate Jesus Is King from his sprawling Sunday Services is how truncated it feels, which in turn minimizes any sense of grandiosity and passion the live events deliver. The album — which West initially planned to release at midnight on October 25 before missing that deadline and then tweeting a few hours later that it would be delayed until he had finished finessing three of the tracks — sounds like a work in progress.

Its opening sermon, “Every Hour,” features the Sunday Service Choir on lead vocals but ends almost mid-note. That’s followed by “Selah,” a more traditional hip-hop track about West’s religious awakening that led to this project: “To whom the Son set free is free indeed, he saved a wretch like me,” West raps. Featuring the Sunday Service Choir as back-up, “Selah” concludes not long after it really starts to get going, leaving listeners to wonder if the song is a half-hearted reckoning of West’s past behavior or declaration that West is a changed man. The next few hip-hop tracks, including “Follow God,” sound similar, with more emphatic proselytizing. (Although “Closed On Sunday,” which makes quick reference to Chick-fil-A, is an embarrassing argument to become a churchgoer. Cutting in a joke about fast food doesn’t quite jibe with the overwhelming sentiment of the rest of the purely religious work.)

The album’s handful of two- to three-minute songs are better indications of what West meant when he reportedly announced at a listening party in September that, going forward, he would be devoting his music to God. “Water” is a beautiful, funk-tinged track, its lyrics straightforwardly about the grace and goodness of West’s Lord and Savior; “God Is” features West belting with some rasp in his voice, “I can’t keep it to myself, I can’t sit here and be still … Jesus saved me, now I’m saved.” It’s an excellent thesis statement, and one that made me wonder what a fuller album centered on this theme would sound like.

The IMAX “experience” that preceded the album, also entitled Jesus Is King and announced in late September, hinted that the album would not quite be the dramatic musical paean to Christ that West had seemed to promise. Instead, it left many fans who went to see it when it opened on October 24, a few hours before the album was slated to launch, to ponder whether the album would indeed be ready on time.

I was one of them, and while the Jesus Is King film is beautifully produced, set in a prayer dome designed by the artist James Turrell and shot through what looks like a widened pinhole camera, it’s otherwise hollow. The film runs for just 38 minutes, longer than the album itself but only barely. It also leaves West mostly off-screen and unheard in favor of focusing on his passionate Choir, who sounds great. For West diehards looking for hints of what the artist’s turn away from hip-hop excess and toward Jesus will really sound like, the film offers few hints beyond the closing track, “Jesus Is Lord.”

Jesus Is King the album is not a weak work; it’s more like an unfinished draft. It will likely satisfy Kanye West fans who in recent years have found themselves exhausted by the rapper’s performative outbursts, controversial political stance, and tendency to announce and shelve new works at a moment’s notice. (Jesus Is King is a reworked version of another album named Yandhi, which was meant to be released in 2018. Although rough cuts of Yandhi were eventually leaked online, West opted to punt the album and work on Jesus Is King instead.) But despite its bright spots, Jesus Is King is unlikely to rank highly among West’s much more confident work. Instead, it’s a tepid step forward into the next phase of West’s ever-changing musical career — less a full-fledged reinvention and more of a reintroduction.