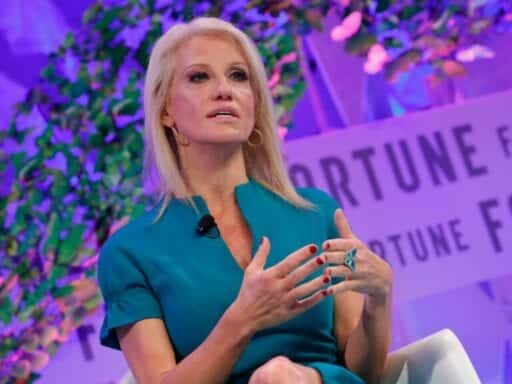 She made the remarks while defending Brett Kavanaugh’s nomination on CNN with Jake Tapper.

Kellyanne Conway, one of President Donald Trump’s top advisers, said she was a victim of sexual assault in an interview on CNN’s State of the Union with Jake Tapper on Sunday.

Conway was on the show to discuss the sexual assault and misconduct allegations against Supreme Court nominee Brett Kavanaugh and the FBI’s investigation into the matter. While defending Kavanaugh and calling Thursday’s hearing with him and one of his accusers, Christine Blasey Ford, a “national disgrace,” Conway shifted the topic to her own experience and became visibly emotional.

Women around the country have recognized themselves in Ford’s story and cited their own experiences with sexual assault when demanding their senators vote against Kavanaugh’s nomination. They’ve called the Senate’s debate over Kavanaugh a test for the #MeToo movement — an idea Conway rejected Sunday.

She went on to call comparisons to Bill Cosby a “disgrace” and continued her attack on the process as “partisan politics.”

“If not one Senate member changes their vote because of what they learn from the FBI investigation, that tells you all you kneed to know about what the president and Judge Kavanaugh have said is a sham,” she said.

Conway also mentioned the women who confronted Arizona Republican Sen. Flake on Friday in an elevator ahead of a Senate Judiciary Committee meeting about their experiences with sexual assault. “God bless them,” Conway said, “but go blame the perpetrator. That’s who’s responsible for the sexual assaults, it’s the people who commit them.”

Tapper, visibly surprised, responded, “This is the first time I’ve ever heard you talk about something personal like that and I’m sorry.” Conway said she’d “just had it.”

He went on to push her about Trump, who has been accused of sexual misconduct by more than a dozen women and who has said that what he claims are false allegations against him have shaped his view on the issue. Shouldn’t Ford and other women be heard?

She went on to talk about how she talks to her son about the Kavanaugh allegations and expressed concern, as many Republicans have, that “any man” could face such claims. “It could be any man in any position now,” she said.

Conway, 51, has been a compelling figure to watch as Kavanaugh’s nomination process has stalled because of the allegations against him. She told Fox News earlier this month that Ford “should not be insulted and should not be ignored” and said the Senate should hear her “in sworn testimony” and Judge Kavanaugh. Days later, she seemed to have shifted, in a call with White House surrogates reportedly saying the allegations might be a “left-wing conspiracy” and saying Kavanaugh’s better than disgraced Hollywood producer Harvey Weinstein. (She brought up Weinstein on CNN on Sunday as well.)

This is not the first time Conway has alluded to a #MeToo moment, but it is the first time she’s plainly stated it was sexual assault. In December 2017, she said at a Politico summit that she had been sexually harassed but “nobody cared” because of her politics. “If we’re going to have an honest conversation everyone — you can’t pick and choose depending on somebody’s politics,” she said.

Conway on Saturday anticipated the backlash she would likely face on Twitter over her statements to Tapper. “I don’t want to hear it,” she said.

North Dakota’s new voting restrictions seem aimed at Native Americans who vote Democrat
Why are the cats sexy? and other Cats questions you were too embarrassed to ask.
SNL and its cast close the season with a touching goodbye
The coronavirus cruise ship quarantine is a scary public health experiment
How to fight fear and anxiety when quarantine ends
Rise of Skywalker’s huge opening weekend was still a big miss by Star Wars standards