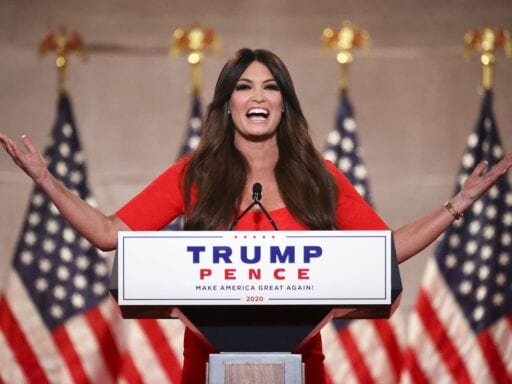 Trump surrogate Kimberly Guilfoyle might no longer be a Fox News Host, but you’d be forgiven for thinking she still was, given her speech at the Republican National Convention Monday evening.

Speaking grandly to an empty auditorium, Guilfoyle delivered a speech more fit for an arena full of screaming supporters than the eerily empty venues of the Covid-19 era. But one of her central themes — and a common one on Fox News — was a familiar one: accusing Democrats of being “socialists” and fearmongering over how electing Democratic presidential nominee Joe Biden would lead to the downfall of the country.

“If you want to see the socialist Biden-Harris future for our country, just take a look at California,” said Guilfoyle, who is dating Donald Trump Jr., another speaker Monday night. “It is a place of immense wealth. Immeasurable innovation and an immaculate environment. And the Democrats turned it into a land of discarded heroin needles in parks, riots in streets, and blackouts in homes.”

From the carefully coiffed waves in her hair to the backdrop of flags, her speech typified the Fox Newsiness of the first night of the RNC. It celebrated America and touched on a range of favorite conservative media talking points, from cancel culture to calling Democratic leaders “cosmopolitan elites” to fearmongering about the US Southern border.

“They want to control what you see and think and believe so that they can control how you live,” she said. “They want to enslave you to the weak dependent liberal victim. They want to destroy this country and everything that we have fought for and hold dear. They want to steal your liberty, your freedom.”

The only way to stop it, according to Guilfoyle, would be by re-electing President Donald Trump. She listed several of Trump’s accomplishments since taking office, mentioning tax cuts, taking on ISIS, and renegotiating trade deals.

Toward the end of her speech, Guilfoyle was essentially shouting into the podium mic at the Mellon Auditorium in Washington, DC. At the center of her speech — and the rest of the evening — weren’t conservative policies or a political party’s vision for the country, it was just one man and one mission: getting Donald Trump re-elected.

“President Trump is the leader who will rebuild the promise of America and ensure that every citizen can realize their American dream!” she exclaimed. “Ladies and gentlemen, leaders and fighters fought freedom and liberty and the American dream, the best is yet to come!”

Trump buys into conspiracy that social media censors conservatives
Mitch McConnell’s grip on Kentucky, explained
The Paris climate agreement is at risk of falling apart in the 2020s
12 excuses for climate inaction and how to refute them
Trump spokeswoman Sarah Huckabee Sanders kicked out of Virginia restaurant by owner
Beyoncé’s Lemonade is one of the best movies of the 2010s