La-Z-Boy used to be a punchline. Now it’s an aspirational brand. 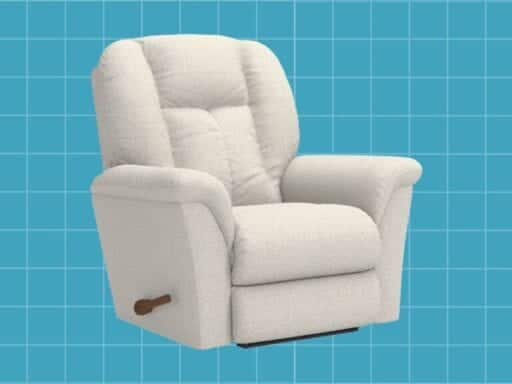 The once-mocked recliner has become an aspirational brand.

My husband, an immigrant from the Soviet Union, divides consumer experiences via a simple binary: this is, or is not the America he was promised. A Starbucks that’s out of half-and-half is not the America he was promised, while a restaurant with unlimited soft drink refills is. At the peak of the America-I-Was-Promised hierarchy is a weekend afternoon with a beer in hand, watching football (US pigskin or otherwise) on TV while ensconced in an overstuffed La-Z-Boy recliner. It’s an image that was pushed deliberately in the 1970s, when NFL heartthrob quarterback Joe Namath appeared in magazine ads for the brand, a vision of masculine potential energy surrounded by a lot of brown tones and vaguely sleazy taglines.

The La-Z-Boy recliner is one of the last viable vestiges of the 20th-century American Dream.

The La-Z-Boy recliner is one of the last viable vestiges of the 20th century American dream, expansive as a classic Cadillac, but without the obvious fuel emissions. La-Z-Boy has emerged in the wake of the 2008 recession as both a stock market winner and luxury brand among millennials. In both form and meaning, it’s imagined as enormous, drawing revulsion from spouses who don’t want their dad’s ugly furniture parked in the living room, and longing from those for whom The Chair is symbolic of a good life. It’s a piece of interior decor that originated as medical furniture and can serve as a home hospital bed today. It’s an object that taps into our deepest, most American anxieties about comfort and leisure and bodies at rest.

The battle for the seat of America

The two furniture legacies built in Michigan typify the state’s, if not the country’s, cultural divide and explain some of the reasons for our confused feelings about living room recliners. On the east side of the state is the city of Monroe, where in the mid-1920s cousins Edward M. Knabusch and Edwin J. Shoemaker founded Floral City Furniture Company. In 1929, they would invent a product so iconic that it would eventually become the name of the company: the upholstered La-Z-Boy recliner. To the west are office furniture powerhouse Steelcase and Herman Miller, best known for the Eames chair, Aeron chair, and office cubicle. One could view western Michigan, also home to proto-side-hustle empire Amway, as tending the furnace that powers our current total work nightmare.

The geographic divide between Michigan’s iconic furniture brands and what they produce mirrors the nation’s push and pull between work and leisure. In the ’80s, ’90s, and early 2000s there was a fear of leisure, and by extension the La-Z-Boy recliner, a sense that maybe something that’s this comfortable can’t be morally okay. Judgment of recliners was tremendous, with La-Z-Boy attracting the most negative attention probably due to being the most recognizable brand. In the midst of the ’80s’ work-and-sweat fixation, William E. Geist of the New York Times headed to a La-Z-Boy showroom before the New York City Marathon to talk to customers who found runners “wacky” and planned to spend the day reaching into a polystyrene cooler for a cold beer. Several entries in the genre known as “men telling us how lazy we all are,” mentioning La-Z-Boy as symbolic of our woes, made their way into Vanity Fair and NPR. A few years after Brooke Shields was named La-Z-Boy spokesperson in 2010, a reporter wrote that she’d have trouble selling to women since La-Z-Boy “is synonymous with the words lethargic, sluggish and idle.”

The La-Z-Boy recliner was cast as an object that softens the body to the point that it takes on the form of the chair. A review of the movie Knocked Up calls lead character Ben “a La-Z-Boy in human form,” an image helpfully illustrated by artist Benedikt Notter in a NSFW Instagram post. 2008’s Wall-E features recliners turned into a lifestyle, where people essentially merge with their chairs due to an excess of comfort and convenience. Defending harsh boot camp tactics, Lance Corporal Gene Talley asked military newspaper Stars and Stripes, “Do you want a La-Z-Boy [recliner] in combat?”

The concept of the La-Z-Boy has expanded far beyond the confines of a chair made by La-Z-Boy Inc., and has become a metaphor for disengagement, especially disengagement from the political process. In the lead-up to the 2012 election, an opinion writer described Obama’s Ohio strategy as, “Pry every Democratic voter out of his or her La-Z-Boy.” In 2014, members of MoveOn.org took an actor portraying then-Speaker of the House John Boehner on a four-day Ohio tour, where the character John “Lazy Boy” Boehner, “recline[d] in a La-Z-Boy recliner and contemplate[d] various topics for up to eight hours a day.” An Esquire piece from 2015 liberally paraphrases an Obama speech as telling Ohio voters to “put down the damn remote, [get] their lazy ass out of the La-Z-Boy,” and vote. Given that Donald Trump won Ohio by a margin of 8.13 points in 2016, Democratic candidates might want to embrace the recliner rather than beer as a symbol of their regularness.

When it’s not associated with sloth, La-Z-Boy is portrayed as a humorously hypermasculine accessory for men who are very male. In 2008, a Minnesota man was arrested for driving what was reported as a motorized La-Z-Boy while under the influence of alcohol. Police seized the recliner, which had been tricked out with a stereo and cup holders, powered by a Briggs & Stratton engine and small steering wheel. A forfeited property eBay auction topped $43,700 before La-Z-Boy Inc. requested that the name of the item be changed to remove their trademark since the chair was not, in fact, a La-Z-Boy. Police Chief Walter Wobig told Wired that he included the term “La-Z-Boy” because “because the media … used the term.” Not even the police department’s attorney caught the error before the auction started.

It was an easy mistake. In the 90 years since the birth of the La-Z-Boy, the name has come to mean much more than products made by La-Z-Boy Inc. Like Jell-O and Kleenex, the term “La-Z-Boy” is a genericized trademark that’s used to apply to a whole class of furniture, usually recliners, due to their popularity and the memorability of the brand name. There was a time when the Barcalounger dominated in popular culture and we spoke far more about the Morris chair, but only the La-Z-Boy occupies such a massive space in the popular imagination now that it’s a shorthand for every recliner ever made. It represents the whole checked-out mentality that resists America’s total work culture and fitness culture, without ever putting the footrest down.

A lot of the recent news about La-Z-Boy concerns the company’s hot stock. In March 2009, shares were trading at just 60 cents each; these days, they’re above $30 despite La-Z-Boy reporting that it had missed earnings expectations in November. Given that the traditional image of a La-Z-Boy consumer is an elder man enjoying his “earned repose” after a lifetime of work (or, less favorably, an older man who falls asleep watching TV instead of paying attention to his wife), I wondered how a company could be making so much money by mostly selling fairly pricey recliners to people living on fixed incomes.

Part of the stock’s rise is because La-Z-Boy makes a whole lot more than just recliners: Bedroom, kitchen, and outdoor furniture bear the La-Z-Boy brand name, and the company acquired mid-century modern brand‎ Joybird in 2018. They’re also now repped by Kristen Bell and they’ve restructured in the wake of the 2008 downturn. Far from being a chair for isolated singles and men dodging their families, involved dads like hockey’s Mike Fisher proclaim proudly that they cuddle their babies in the family La-Z-Boy.

For many people, the purchase of a La-Z-Boy may be a practical decision based on the way the US health care system works. We got our own La-Z-Boy under intense but, I’ve learned, not-uncommon circumstances; after a series of extreme surgeries that involved putting part of a cadaver in my jaw, I found that buying a recliner was only slightly more expensive than renting a hospital bed, with the added bonus of giving my husband The-America-He-Was-Promised. The use of a recliner as medical furniture isn’t quite so much a dystopian hack (like taking an Uber to the emergency room instead of an ambulance), as a return to the recliner’s 19th-century advent — as patent furniture for medical use. If work leaves you with back pain, the American Chiropractic Association has endorsed La-Z-Boy reclining furniture, and programmers have shared how to hack one into a desk chair. But for most people, a recliner represents a space away from work, a napcentric, personal pod of softness that aligns surprisingly well with late-2010s consumerism Treat Yo’ Self-care culture.

Starting in the late 2000s, the La-Z-Boy recliner became the benchmark for a comfortable seat, driving the company’s image rehabilitation. Car reviewers were among the first in recent memory to use La-Z-Boy favorably when they compared cushy car seats to a recliner. The 2012 Fisker Karma EcoChic’s seats “are plush and comfortable, not overly bolstered or sporty but, like an old La-Z-Boy, good for many hours of spinal serenity,” according to Car and Driver. A “big Lincoln’s seats rival most La-Z-Boy chairs,” the Hyundai Equus Ultimate has “a back seat that is as inviting as your favorite La-Z-Boy,” and a 2013 Lexus LS 460’s ride “is La-Z-Boy comfortable.” Soon, other seats were compared to the La-Z-Boy recliner: Singapore Airlines’s upgraded cabins featured La-Z-Boy-like reclining seats; NBA courtside seats were called relaxing like La-Z-Boy recliners; even bike saddles have been compared to La-Z-Boys. The comparison expanded to include super-cushioned shoes and beds of seaweed for just-released baby sea turtles.

The 20th-century promise of America is collapsing around millennials, turning functional, once-uncool companies like La-Z-Boys into luxury brands.

The 20th-century promise of America is collapsing around millennials, turning functional, once-uncool companies like La-Z-Boys into luxury brands. The association of La-Z-Boy with luxury seems linked to the advent of plush recliner seating at movie theaters, which started to take off around the early 2010s, likely inspired by the home theaters of the super rich. A luxury barbershop offered La-Z-Boy recliners at the grooming stations, and Seoul’s Incheon Airport offered relaxation stations with massaging La-Z-Boys.

Owning a La-Z-Boy is a shortcut to a taste of earned repose and literal leaning out, an act of passive consumer resistance to a culture of total work and burnout that offers no guarantee of the payoff that animated previous generations. For millennials, the promises aren’t very big anymore. You may not be able to buy a home, but it’s possible to score a discount La-Z-Boy online. Even if the American dream is out of reach, the American nap is still in our grasp.