Less than a week ago, Trump tried to scrap HealthCare.gov in Georgia. Now he may lose the state. 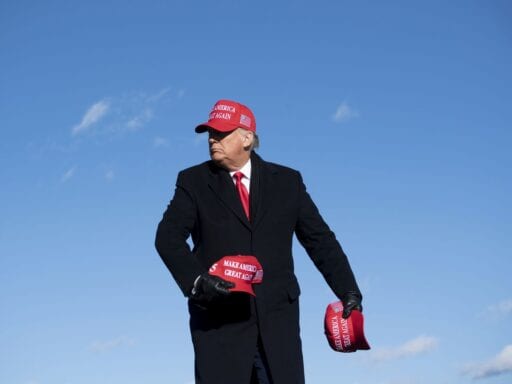 Share
Loading...
Trump’s decision to scrap HealthCare.gov in Georgia just two days before the election could have pushed President-elect Joe Biden over the top. | Brendan Smialowski/AFP via Getty Images

Joe Biden took the lead over Donald Trump by a little more than 1,000 votes in Georgia early Friday morning, with many votes still to count. It won’t be decisive, with Pennsylvania’s 20 Electoral College votes winning Biden the presidency, but if the lead holds, flipping Georgia will still be extremely satisfying for Democrats after several anxious days of waiting for the results.

The margin would be as narrow as it could be. There are lots of factors in what made Georgia so competitive this year — including a fired-up Black voter base, college-educated suburbs leaning away from Republicans, and the legacy of the late John Lewis hanging over the election with his death this year.

But elections are also decided on policy, and we know that health care has been a top issue for American voters for the past year. We also know that Democrats are more trusted by far on health care. I am going to forever wonder whether Trump’s decision to scrap HealthCare.gov in Georgia just two days before the election could have pushed Biden over the top.

If just a few thousand people out of the nearly 5 million who cast ballots in Georgia have been worried about the future of their health insurance in the middle of a pandemic and saw the news that HealthCare.gov was going away in the state, they might have gone for the Democrat. When the margin is this thin, everything matters.

Independents in Georgia broke for Biden by 7 points, 51 percent to 44 percent, according to the New York Times exit polls. (In 2016, Trump had won them decisively.) And health care policy was one of the top issues for Biden voters, just behind racial inequality and Covid-19, with 79 percent saying it was important to their vote.

There is much discussion about the polls this week with a seemingly meaningful miss in many 2020 races. But as Ezra Klein put it on his podcast the other day, national issue polling probably does give us a good idea of how people broadly feel, and that has also shown us voters care about health care. They consistently name it as a top priority, and Obamacare is as popular as it’s ever been. Democrats are generally more trusted on the issue, and Republican reform plans proved unpopular in 2017 and the 2018 midterms.

Americans want health coverage, and they want costs to be cheaper. Experts believe Georgia’s health care plan, approved by the Trump administration on the Sunday before the election, would lead to tens of thousands of people losing coverage.

The US Department of Health and Human Services announced it had approved a plan from Georgia Gov. Brian Kemp to close HealthCare.gov to his state’s residents. They will instead be asked to shop for health insurance through brokers or on private websites. More than 430,000 Georgians buy their health insurance through HealthCare.gov, and almost all of them receive premium subsidies created by the health care law.

The Center on Budget Policy and Priorities laid out the ways people could lose coverage or face higher medical costs as a result of eliminating HealthCare.gov in Georgia. Consumers may be confused about where to buy coverage after seven years of using the federal website. Insurer brokers have incentives to steer people to non-ACA coverage that doesn’t cover preexisting conditions. Many private insurance exchanges sell noncompliant coverage alongside ACA plans.

“Evidence from past, far simpler transitions between federal and state marketplaces suggests that tens of thousands of Georgians might lose coverage simply because of the disruption from the state’s transition away from HealthCare.gov,” the center’s analyst, Tara Straw, wrote.

Christen Linke Young and Jason Levitis at the Brookings Institution gave an estimate of 50,000, based on some back-of-the-napkin math.

For that reason alone, the Georgia waiver is arguably illegal. The waiver program under which the plan has been approved specifically stipulates that a state waiver cannot lead to people losing coverage or costs increasing. (Georgia and Trump’s health department say the state’s plan won’t lead to coverage losses.)

As for the timing of the news and its political implications, Trump’s hand was somewhat forced by the health insurance calendar. Open enrollment for 2021 Obamacare plans began on November 1, and so the Georgia waiver needed to be approved before that deadline if it were to take effect.

It is also, however, the kind of administrative action that the Biden administration may be interested in undoing once the president-elect takes office. The Democrats seem likely to target the expansion of short-term insurance and Medicaid work requirements, which were also recently approved in Georgia.

There is a long list of anti-abortion and other women’s health policies that will be reviewed as well.

“Some of Biden’s early efforts in health care may be simply undoing what Trump did,” Larry Levitt, executive vice president at the Kaiser Family Foundation, told me. “Some of these things could be done quickly, while others would take time if they involve undoing actual regulations.”

The Georgia waiver could be added to that list. Its voters made their voice heard this week. Elections matter.