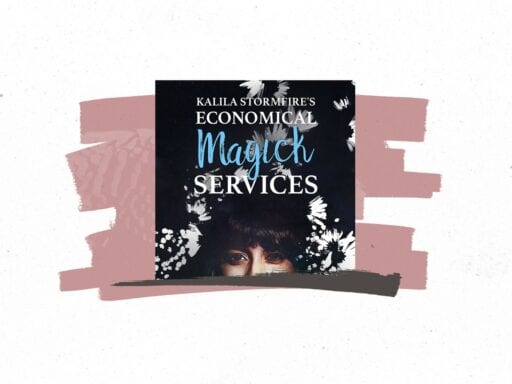 If you could turn cottagecore — that cozy, witchy aesthetic built around some unholy combination of queerness, magic, Taylor Swift lyrics, and mid-2010s Tumblr — into a podcast, you’d have Kalila Stormfire’s Economical Magick Services, an independent, twice-monthly audio drama series that I’ve loved since its inception in 2018.

Kalila Stormfire is the story of a young witch trying to restart her life after she is ejected from her coven for casting a spell that went terribly wrong. Complete with her cat, Eldritch, Kalila finds a bunch of new clients from her working-class neighborhood who test her magical skills, entice her on new adventures, and gradually become her new community of friends and misfits.

On the surface, Kalila Stormfire seems tailor-made for anyone who loves an archetypical October aesthetic — think tarot cards, cardigans, pumpkin spice. But actually, that “cottagecore” label’s not quite right for this series. “Cottagecore,” despite sharing a softness and soothing core with Kalila, is inevitably homogeneous. All those Taylor Swift lyrics, those legions of young white women in cozy cardigans, sitting before soft-filtered altars reading astrology charts — they originated from a whitewashed, suburban view of what “magic” is.

Kalila Stomfire’s creator, Lisette Alvarez, consciously thinks about #witchyaesthetic in building out the show and its world, which is more urban fantasy than rustic countryside — it’s freer, more layered, and more multicultural than cottagecore tends to be. Her version is rooted in actual occult practice, because Alvarez is a trained practitioner of esoteric New Age studies including magic. And it’s more overtly queer than most cottagecore fare, despite our best efforts to read lesbian vibes into Folklore.

Perhaps above all, magic in Kalla’s world is deep, both practically and thematically. Not only is the actual magical theory deep, but it’s omnipresent: The magic in the show is also a fundamental part of the characters’ mundane daily lives. Each character’s experience of magic is also inextricable from the way they experience things like poverty, classism, dysphoria, or grief. It’s magical realism, infused with a close exploration of identity, culture, religion, and the intersection of our personal lives with our spiritual practices — all framed through the tale of a narrator whose own life is full of shadows and self-doubt.

Kalila is fiction — but it’s also almost a religious ritual. (With witches.)

Kalila Stormfire takes place in an alternate reality, in the fictional city of Brushland, where magic (“magick” therein) and spellwork are everyday parts of the culture. Gods and demons can be summoned without breaking a sweat, and a good witch is the occult equivalent of a good handyman. Kalila, trying to set up shop as one such magical repair worker, gets a number of unusual cases, often from people who are desperate for help from the first local witch they come across. All the while, someone mysterious, for reasons unknown, has been blacklisting her from gaining potential new clients throughout her community.

As the story evolves, we’re introduced to a wonderfully diverse cast of characters and lots of magical theory — so much so that, in any other context, it might feel overwhelming or didactic. Instead, you get it filtered through the personality of Kalila herself: harried, well-meaning but chaotic, and still rubbing her wounds from the incident that caused her to have a falling-out with her coven.

As the story unfolds, Kalila tentatively begins the slowest of slow-burn relationships with her mysterious new client Desiree, and she goes on the long journey of figuring out who’s trying to ruin her attempt to start her life over — and why.

The show is currently in its third season. Episodes are short — under half an hour — and the first season is presented to us in narrative form by Kalila herself, voiced by Alvarez. As the story progresses and more characters drop into Kalila’s life, the cast expands, the sound design becomes a bit more elaborate, and the story grows to encompass encounters with fae folk, brushes with alternate dimensions, and a whole lot of occult exploration.

That part won’t be for everyone — but it’s not supposed to be. The show openly embraces the kind of mysticism that doesn’t get a lot of attention outside of niche communities of practicing witches and proponents of occultism. Kalila tosses around actual magical theories and practices, the tools of her trade, while she and the other characters frequently work with esoteric themes, like reading auras or spell-casting by speaking intent into the universe.

These are all magic practices that are alive in our own world, but they don’t often get taken seriously. US culture tends to categorize belief systems as Christianity, skepticism, and everything else, so there’s a lot of accepted folk wisdom in Kalila that you just have to … well, accept. The podcast says this from the outset: Each episode informs you that it’s “for initiated ears only,” thus inviting you to engage with its occult practices on its own terms.

Yet Kalia’s commitment to its magical world-building never obscures the plot. And the plot is familiar, up to a point: Kalila is every lost girl who’s struggled to grow up and become independent without just running back home to her parents. She struggles with money, with love, with adulthood.

As Kalila grows and finds a new community for herself, however — a ragtag gang of witches, shapeshifters, werewolves, and changelings — the story gets more complicated. Kalila manifests an alternate personality — the difficult, wilder, more outspoken side of herself, her “shadow” self — and has to work to accept and align her divided selves. The story expands its emphasis on magic as an active spiritual practice. These are a bunch of witches, after all, and witches are very concerned with analyzing feelings and emotions, creating harmony, and finding balance. It’s easy to come away from an episode of Kalila feeling like you’ve just been through an actual session of spell-casting, or astral projection, or trance inducement.

But Kalila doesn’t just fling its spiritual practices in your face. The series actively encourages you to use them, meditate on them, deploy them to get through your life — your own brushes with loss, anxiety, anger, fear, and loss of control — in whichever ways work for you. As a dedicated example of hopepunk storytelling, the series roots all its exploration within the values of community, found family, and normal people just doing their best to get through the day and uplift each other. It’s a soothing, tranquil framework, even when its topics get messy and uncomfortable.

As an avowed atheist, I find all of this heartening: I’m not going to be harvesting threshold vines any time soon like Kalila, but the podcast allows me, twice a month, to step into a version of myself that could be a witch, if I wanted. And that version of me is totally down to follow Kalila into her witchy travels — and possibly get closer, with or without witchcraft, to confronting shadows of my own.

The department store’s false promise to Black America
Vox Sentences: NATOhhh no...
Vox Sentences: 17 fires this time
It’s actually very reasonable for Florida to open its beaches
Today’s dramatic Federal Reserve announcements, explained
The first big test of Facebook’s oversight board will be the US election