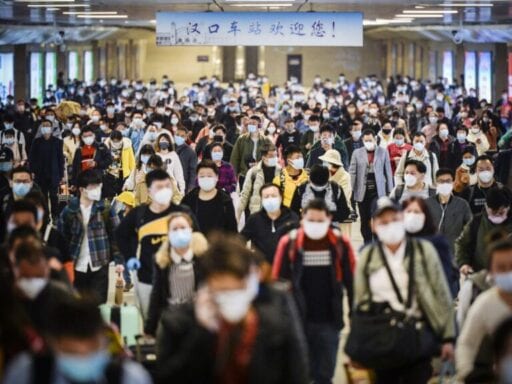 The Chinese government has officially lifted quarantine restrictions on Wuhan, ending the 76-day shutdown that froze the city where the global coronavirus outbreak first emerged.

Outside of China, the pandemic continues to rage. The United States now has nearly 400,000 confirmed coronavirus cases as of April 8. The death toll has surpassed 12,800. The last 24 hours saw the largest single-day death toll of more than 1,850 — the highest single-day number recorded anywhere in the world since the start of the outbreak. America’s toughest week has arrived.

Congress and the White House are also scrambling to supplement the $2 trillion stimulus package passed late last month, but right now the White House and Democrats might be far apart on what they want to see in any legislation.

The Chinese government put millions of people on lockdown at the end of January, four weeks after officials in Wuhan first publicly announced the emergence of a novel coronavirus. Wuhan was the epicenter of the outbreak, and the Chinese government moved to put nearly 11 million people on an unprecedented lockdown, severely limiting movement and cutting off travel to and from the city, in order to try to curb the virus’s spread.

After 10 weeks, those restrictions were finally lifted at midnight local time on Wednesday, allowing people to once again leave the city by train or car. However, according to the New York Times, people were only allowed to leave if they could prove to authorities with a government-sanctioned app that they’re not at risk of spreading the virus.

A video from Chinese state-run media showed Wuhan springing back to life, with cars swarming the highways. But in reality, the steps toward normalcy are tentative, as fear lingers that once the quarantine is lifted, the virus might spike again.

China reported no new deaths from coronavirus this week, and officials are reporting that most of the cases are coming from people arriving from overseas. But there are still serious questions about whether China has fully accounted for the number of infections and deaths.

Wuhan was the hardest hit by the virus, accounting for about two-thirds of coronavirus infections. Hubei province, where Wuhan is located, accounts for the majority of China’s more than 3,300 deaths.

Over the weekend, White House officials warned that the country should brace itself for a harrowing week.

And it is here: More than 12,800 Americans have died from the coronavirus so far. In the last 24 hours, 1,858 people passed away, marking the largest single-day death toll recorded by any country during the coronavirus pandemic. Much of this was driven by New York City, which recorded 806 deaths in 24 hours, after some promising signs earlier in the week that deaths might have begun to level off.

The death statistics can feel impersonal and cold, but by now many Americans personally know someone affected by the virus, whether a family member, friend, coworker, mechanic, or doorman. At least 41 workers for New York’s Metropolitan Transportation Authority have died from the virus. At least four workers in grocery and big retail stores have died. An ER nurse in New York City. A health care worker in California. A 93-year-old doctor in New Jersey. A police officer in Philadelphia.

This is what a pandemic does.

The coronavirus public health crisis is unfolding alongside an economic one, which is deepening as much of the US economy remains at a standstill. Congress passed a $2 trillion relief package last month that includes loans for small businesses, one-time stimulus checks for most Americans, and expanded unemployment benefits.

But with 10 million unemployment claims in just two weeks, it’s likely not enough. On Tuesday, Treasury Secretary Steve Mnuchin asked Congress to approve another $250 billion in loans for small businesses, as the program has been swamped with applications. But Democrats also have their own demands, including billions in funding for hospitals, community health centers, and state and local governments, as well as more assistance for SNAP, the federal food stamp program.

On Wednesday, Senate Minority Leader Chuck Schumer (D-NY) and House Speaker Nancy Pelosi (D-CA) said they would support the additional $250 billion in small business loans if half went through community-based financial institutions (like credit unions) that often help farmers, women, and minority- and veteran-owned business, according to the Washington Post.

Whether that will be enough to deal with the coronavirus crisis is unclear, and lawmakers are advancing their own priorities. One issue that is likely to get more play is the question of voting. Though it’s not an economic issue, after voters conducted in-person voting in Wisconsin on Tuesday, the safety of voting has gotten even more attention. So far, President Donald Trump has dismissed the idea, suggesting that making voting safer and more accessible during a pandemic “doesn’t work out well for Republicans.”

And instead of good news, a tribute

Today is a good day to listen to some John Prine. The Grammy Award-winning folk-country singer and songwriter passed away from complications related to the coronavirus on Tuesday at the age of 73, Rolling Stone reports.

Deal? No deal? Delay? Here’s the week ahead in Brexit votes.
The real cost of smart speakers
Jim Jordan’s allies are questioning the premise of the Ohio State sexual abuse allegations
The fight to release the Snyder Cut of Justice League (which may not even exist), explained
The techlash is real, and Silicon Valley should be worried, says BuzzFeed’s Ben Smith
Bernie Sanders’s definition of democratic socialism, explained