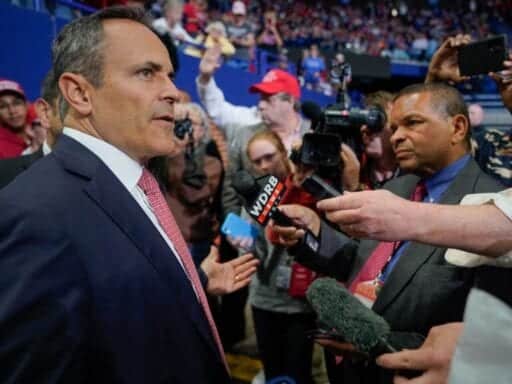 Share
Loading...
Gov. Matt Bevin of Kentucky speaks with the media prior to a campaign rally for U.S. President Donald Trump on November 4, 2019, in Lexington, Kentucky. | Bryan Woolston/Getty Images

John Hicks told me that Kentucky’s election was a “sign that people are getting sick and tired of the two-party system.”

A third candidate, Libertarian Party candidate John Hicks, took part in the race as well — and he won about 28,426 votes, far more than the difference in votes between Beshear and Bevin.

And Hicks is getting the blame for Bevin’s loss from some angry conservatives.

The Daily Caller’s Daniel Klein writes, “Libertarians who take responsibility for the consequences of their conduct need to face up to [the damages of third parties]. There is more to political virtue than flashing one’s supposed allegiance to liberty.”

But Hicks thinks the election just makes his case. He ran on a platform calling for electoral reform, telling me that the election proved, “We really do need election reform in this country” to ensure that voters are heard. “Our electoral system causes alienation,” he said, “where people are just turned off by politics.”

And adding to his point, Bevin is refusing to concede the race. He claims that voting “irregularities” took place, saying Wednesday that “thousands of absentee ballots were illegally counted” and Kentuckians were turned away from the polls — with absolutely no evidence of his claims. I reached out to Gov. Bevin’s office and will update if and when I hear back, but Republican Party lawmakers are asking Bevin to “let it go,” and Republican Senate President Robert Stivers said Friday, “It’s time [for Bevin] to call it quits and go home, say he had a good four years and congratulate Gov.-elect Beshear.”

Hicks told me he hoped the election showed that independent voters were a force to be reckoned with. And the Libertarian Party of Kentucky put it more bluntly on Facebook, writing, “If our friends in the major parties do not want this to happen again, they should think about passing ranked-choice voting. And supporting our issues.”

Posted by Libertarian Party of Kentucky on Wednesday, November 6, 2019

“The blame needs to be placed on our electoral system”

I spoke to Hicks by phone on Thursday, and during our interview, Hicks emphasized that the election results showed the need for voting reforms, like ranked-choice voting.

He said of his vote total, “the results did ‘spoil’ the election, but the blame needs to be placed on our electoral system. We have the single-member district victory system, and we need runoffs. You shouldn’t be able to win an election with less than a majority of the vote.”

“And ironically, that’s one of the things I was running on. I ran on three planks: liberty, civility, and election reform. [And] the first item under election reform was instant runoff voting using ranked-choice voting. So [this election] is making it an important point, it’s really worked out well in terms of getting our message across. We really do need election reform in this country, and people are seeming to pay attention to it.”

Single-member district voting is the voting system used to elect House Representatives and most state and local representatives in America. Representatives can win elections without receiving a majority of the vote, and it is difficult for third parties to win seats because potential supporters worry about “wasting” their votes.

But Hicks wants to change that in Kentucky and adopt a ranked-choice voting system with an instant-runoff option, which he told me is “working well wherever it’s being used.” As my colleague Dylan Matthews and Vox contributor Lee Drutman have detailed, ranked-choice voting systems work by allowing voters to rank their choices — first choice, second choice, and so on.

As Hicks told me, ranked-choice voting is already being used in Maine — the first state in the nation to do so for state-wide and federal elections — and in the cities of Minneapolis and St. Paul.

Hicks said he hoped Kentucky’s tight election would help electoral reform get more attention, “and we can get it adopted a lot of places now.”

“We’re letting the Republicans blame us”

In our conversation, Hicks told me he was “letting the Republicans blame us” for Bevin’s loss as he waited to see how a potential recanvass effort might play out, but believed that the election showed just how much the Libertarian Party was growing. “We got votes from both Democrats and Republicans and, more importantly, independents and people who wouldn’t otherwise have voted.”

And contra Kentucky Senate President Stivers, who before changing course Friday said Wednesday that most of the votes Hicks won would have gone to Bevin had Hicks not run, Hicks told me that his platform — and that of the Libertarian Party — was far different from Bevin’s.

“We ran on legalizing marijuana,” he said, “not exactly something that the religious right is favoring. [And] Libertarians in general are strong on civil liberties, free speech, separation of church and state, and so forth.”

Hicks told me he hoped his success showed that voters are ready for third parties to emerge. Saying that he got many votes from independents, “that’s a sign that people are getting sick and tired of [the] two-party system. Let’s boot the two-party system and open it up to other parties.”

“The two main parties are actually losing members. People are dropping out of them and registering as independents. But we’re growing, and we’re growing rapidly and people are starting to notice us.”

Poll: 40 percent of Americans think the worst of the coronavirus is over, even as cases spike
Nike, Colin Kaepernick, and the history of “commodity activism”
Why we like Love Actually, and the case against it
The second White House coronavirus outbreak: Mark Meadows, the Secret Service, and more
California just passed a landmark law to regulate Uber and Lyft
How our Google searches have changed in this presidential election