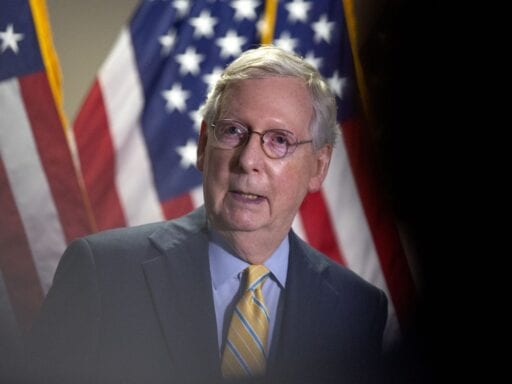 The Senate majority leader didn’t specify the timing of the vote — but confirmed that he supports it.

In the wake of Supreme Court Justice Ruth Bader Ginsburg’s death on Friday, Senate Majority Leader Mitch McConnell made clear that whoever President Donald Trump picks to replace her will get a Senate floor vote.

“President Trump’s nominee will receive a vote on the floor of the United States Senate,” he said in a statement, though he did not specify when this potential vote is expected to take place.

Given how close the election currently is, it’s possible Republicans could attempt to confirm a new justice before November or conduct the vote during the lame-duck session that Congress will hold later in the year. Even if Trump loses the election in November, or Republicans lose their Senate majority, former Vice President Joe Biden and a new Congress wouldn’t take over until January, leaving the GOP a window of time when they could act on the vacancy.

McConnell also emphasized that he viewed this vote as central to Republicans’ following through on their promise to remake the federal judiciary. “Americans reelected our majority in 2016 and expanded it in 2018 because we pledged to work with President Trump and support his agenda, particularly his outstanding appointments to the federal judiciary,” he said.

McConnell’s position in 2020 is opposite from his stance when President Barack Obama nominated Judge Merrick Garland to the Supreme Court in March of 2016. During Garland’s confirmation process, McConnell took the position that a Supreme Court Justice should not be confirmed during a presidential election year. The election is just 46 days away.

For his part, Senate Minority Leader Chuck Schumer has taken the position that McConnell did after Justice Antonin Scalia’s death.

“The American people should have a voice in the selection of their next Supreme Court Justice,” Schumer said in a statement, using the same words McConnell used in 2016. “Therefore, this vacancy should not be filled until we have a new president.”

As of Friday night, it’s unclear whether McConnell will have the votes to move ahead with the confirmation of a new justice.

An extremely conservative judge just rejected an effort to disenfranchise 127,000 voters
A pro-democracy activist on Hong Kong’s year of turmoil: “The city itself is dying”
Anti-gay prejudice may have driven jurors to sentence a man to death. His execution is today.
Why the government is investigating Apple, Amazon, Google, and Facebook for antitrust — but not Mic...
Vox Sentences: Disarray down under
Will Ferrell and Julia Louis-Dreyfus were finishing each other’s sentences by the end of Downhill